Our project is an all-analog keyboard synthesizer like the ones popular in the 1970s.

Our project is an all-analog keyboard synthesizer like the ones popular in the 1970s. 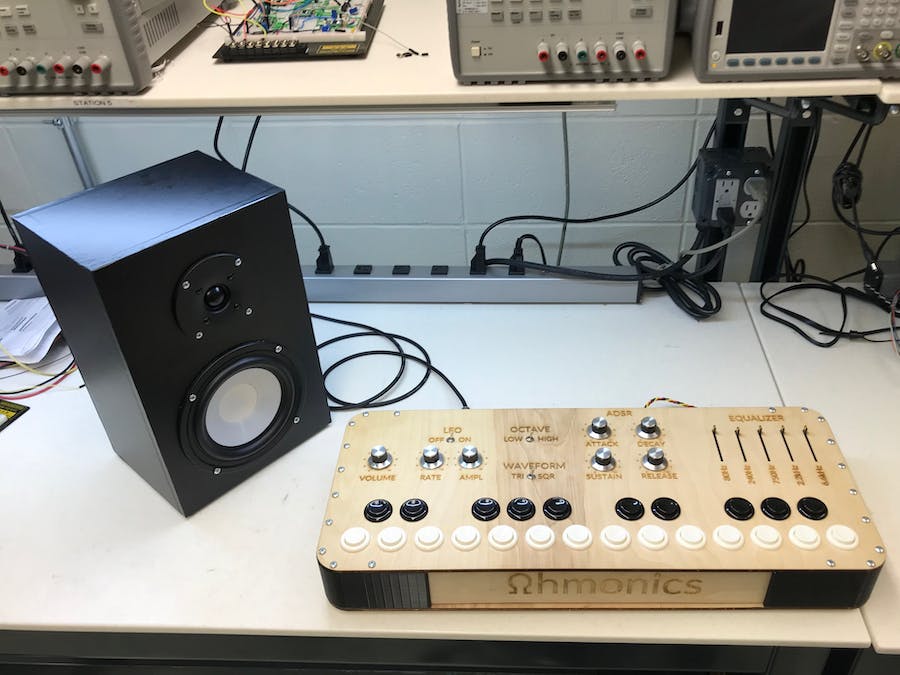 This project is a fully analog electronic keyboard synthesizer similar to the type that were very popular in the 1970s. Our synthesizer has a VCO, ADSR, and equalizer just like a commercially available keyboard. The VCO synthesizes our audio waveform and can be switched between generating a square or triangle wave. The keyboard that controls our VCO has two octaves of keys, and we have an octave switch that shifts the signal up an octave giving us a total range of three octaves. The ADSR generates an envelope that then gets applied to the VCO output. This signal then goes through the equalizer which modifies the frequency response of our system. The output of the equalizer feeds an integrated amplifier that drives a speaker and makes the sweet analog tones of our synthesizer audible.

We divided the project in 5 subsystems: The voltage controlled oscillator, keyboard and power supply, equalizer, amplification and speaker and ADSR.

The VCO is the heart of the keyboard because it is the one that synthesizes the actual wave forms. As it is an analog device we had to use rail to rail operational amplifiers (the LMV324 from Texas Instruments) and the result was really accurate. The VCO was able to generate triangle and square waves

The ADSR envelope generator utilizes an NE555 Timer created by Texas Instruments to control the timing of a sound envelope with an attack(A), decay(D), sustain(S), and release(R) stages. When it senses the appropriate inputs, the timer will trigger and generate the ADSR envelope by charging a capacitor through a resistor-capacitor(RC) network. The rates of charging and discharging, which correlates to the timing of the attack, decay, and release stages, can be controlled through potentiometers. The sustain is also controlled by a potentiometer which acts as a voltage divider. Once the envelope is generated, it passes through a series of amplifiers and inverters to attain appropriate voltage levels for the mixer. It is then passed into the AD633 Analog Multiplier where it is then mixed with a triangle or square wave which is generated by a voltage controlled oscillator(VCO).

For the switching regulators needed for the power supply we used the Webench software (from Texas Instruments) because it was the best way to compare switching regulators with each other. It also gave full schematics based on inputs and outputs we had with the ability to test transient situations. It also had full BOM export that made ordering very easy.

For the output of this system we used an integrated amplifier and built a custom two-way speaker with a passive crossover. The amplifier IC we decided on was the Maxim MAX9744 which offered us relatively high output power at 20 watts, but at a relatively low input voltage requirement of 14 volts. To keep this high power IC cool we developed a fan control circuit that used an LM35 temperature sensor along with an NE5532 op amp in an asymmetrical Schmitt trigger configuration. The output of this fed a 74HC04 that inverted the signal and provided a clean 5V or 0V to control the MOSFET that drove our fan.

For the enclosure, we first designed the product in Fusion 360 CAD program.

After that, we 3D cutted the wood pieces. This was the result:

After that, we 3D printed the lateral pieces with a Lulzbot TAZ printer and assembled the enclosure.

Assembly of the synth (without the electronics)

We designed the PCB in eagle software. We added a silkscreen for each sub-module:

Then, we ordered the PCB and one week later...

The assembly was an important and really enjoyable part of the build. We used labeled twisted cables for all the connections.