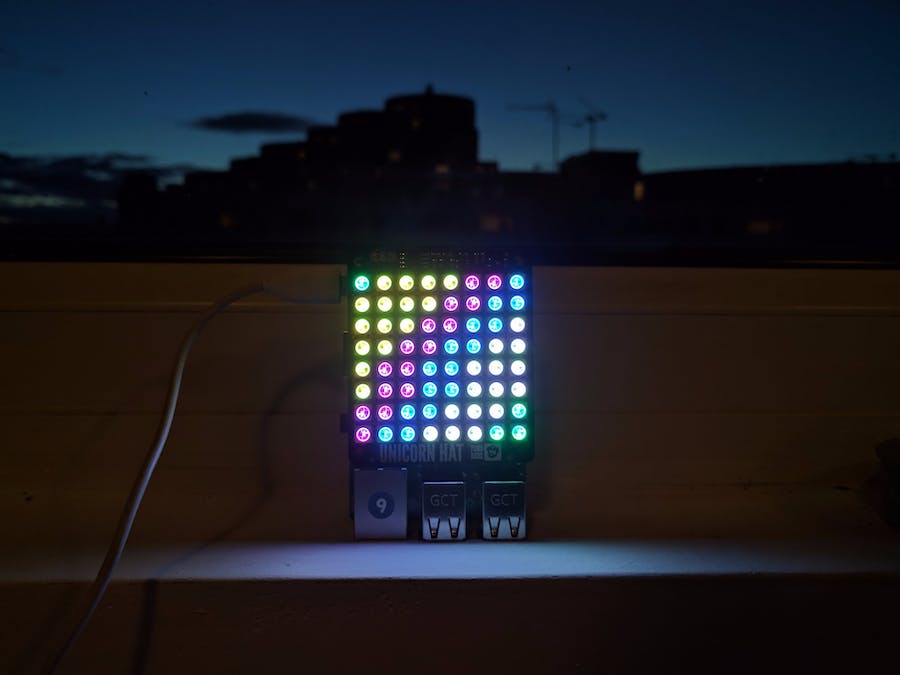 The minutes until the next train are displayed on the Unicorn Hat (an 8x8 LED matrix).

The number of green LED's lit up, starting from the top left corner of the Unicorn Hat, indicate the number of minutes until the next train.

If you're happy with that, we can get started with the tutorial.

1. This tutorial assumes you're using a Raspberry Pi 3 (RPi) with a Unicorn Hat (UH), but if you modify the code slightly, you should be able to use any internet enabled RPi with any LED matrix (or LCD, or OLED display).

2. We're going to use Resin.io to program the RPi with in the tutorial, but you can just as easily run this directly on a RPi yourself, just use 'rPiTrainDepartures.py', 'coordinates.py', and set the environment variables on the RPi directly, or hardcode them into the program (more details in step 7).

Resin is essentially a container that runs on the RPi, which pulls updates to the application on-the-fly from Git. Which, means I can program with my regular laptop and sync the code to the RPi with just a 'git push' (nice because I don't have an external monitor).

It's free for up to 10 devices, which should be just fine for most casual use cases.

3. First clone the code base to the working directory of your choice:

4. Register and create your first application on Resin.io.

You can name the application whatever you want; I suggest 'rPiTrainDepartures'.

Use this tutorial to get set up on Resin

Come back when you've inserted the microSD card back into your RPi after flashing the Resin image (we'll take it from there).

5. Add the Resin repo to your working directory git. This will allow us to push code to the RPi.

In your terminal, cd into the working directory where you cloned raspberryTrainTimes.git.

On the Resin webpage, click into the Resin application you just created. On the top right corner there's a field with a string that starts with 'git remote add ...'

Copy that string into your console and run it, e.g.:

6. Try to push the code to your Resin application.

If everything's gone right up until this point, you should see something like this:

You'll notice we haven't specified which station we'd like to get train departures for, nor which destination we're interested in.

While Resin uploads everything to the device for the first time, this is a good opportunity to get all that set up.

The first thing you're going to need to do is to get an OpenLDBWS access token from National Rail to access their API. You can do that by filling out a short form here.

Once you've done that, go back into the Resin application webpage and click 'Environment Variables' on the left side-panel.

Add an environment variable called 'NRE_LDBWS_API_KEY' and paste your OpenLDBWS access token into the values field.

These are, you might have guessed, the stations that we're going to be checking train departures FROM and TO. The stations are specified with a 3 letter code (e.g. Birmingham International is 'BHI'), which you'll need to lookup on a CSV that National Rail provides here.

Save your environment variables. Then, restart the running application on the Raspberry Pi. You can do this by going to 'Actions' on your Resin console and click the yellow button 'RESTART ON ALL DEVICES'.

Forget digging out the phone last minute while you're running out the door. Enjoy your coffee in the warm bask of knowing when the next train is.

If your RPi is connected to your Resin application online, you can see the console logs of your RPi on the device page. This seriously helps with debugging.

If you think you've found a bug with the program, please create an issue on GitHub, or better yet, a pull request with your fix!

coordinates.py holds a couple ways of lighting up the LED's (which you can select on line 62 of rPiTrainDepartures.py): a diagonal zig-zag pattern, and a straight left-to-right pattern.

You can experiment with your own ways of lighting up the LED's in this document.