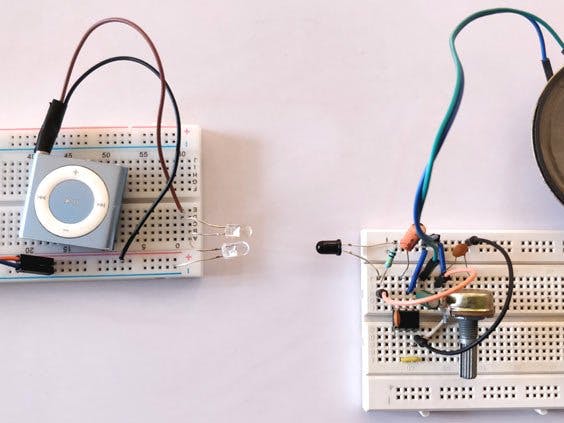 Wireless audio is already a technically advanced field where Bluetooth and RF communications are the main technologies (although most commercial audio equipment works with Bluetooth). Designing a simple IR audio link circuit would not be beneficial when compared to the existing technologies but it surely will be a learning experience about wireless audio transfer.

The reason for not being beneficial is the fact that unlike Bluetooth, IR is line-of-sight communication i.e. both the transmitter and receiver must always face each other without any obstacles. Also, the range may not the as large as that of a typical Bluetooth wireless audio.

None the less, for the purpose of understanding, let me design a simple IR Audio Link circuit using easily available components.

It is very similar to your TV remote, when you press a button the IR led at the front of your TV, it transmits a signal which will be picked up by a photodiode (TSOP commonly) and the signal will be decoded to find which button you have pressed, check here the universal IR remote using TSOP. Similarly here the signal transmitted will be an audio signal and the receiver will be a plain photodiode. This technique will also work with normal LEDs and solar panels; you can read the Audio Transfer using Li-Fi article to understand how this method is very similar to Li-Fi technology.

The transmitter circuit only consists of a couple of IR LEDs and resistor connected directly to the audio source and the battery. One tricky place where you might encounter a problem is with connecting the audio jack to the circuit. A normal Audio jack will have three output pins two for left and right earphone and the other is shield which will act as ground. We need one signal pin which can be either left or right and one ground pin for our circuit. You can use a multimeter in connectivity to find the right pinouts.

The working of the Transmitter circuit is pretty simple, the IR light from the IR LED acts as a carrier signal and the intensity of the IR light acts as a modulating signal. So if we power the IR led through an Audio source the battery will illuminate the IR led and the intensity with which it glows will be based on the audio signal. We have used two IR LEDs here just to increase the range of the circuit; otherwise we can use even one. I build my circuit over a breadboard and the circuit can be powered anywhere between 5V to 9V, I used a regulated 5V in place of the battery so I did not use the current limiting resistor 1K. The breadboard setup is shown below, I have connected my IPod here as an audio source but can use anything that has an Audio jack (Sorry Iphone users).

The receiver circuit consists of a photodiode which is connected to an Audio amplifier circuit. The Audio amplifier circuit is build using the popular LM386 IC from Texas instruments, the advantage of this circuit is that its minimal requirement of components. This circuit can also be powered from a voltage ranging from 5V to 12 V, I have used my breadboard regulator module to supply +5V to the circuit but you can also use a 9 V battery as well.

The pin detail of the LM386 IC

PIN 1 and 8: These are the gain control PINs, internally the gain is set to 20 but it can be increased up to 200 by using a capacitor between PIN 1 and 8. We have used 10uF capacitor C3 to get the highest gain i.e. 200. Gain can be adjusted to any value between 20 to 200 by using proper capacitor.

Pin 2 and 3: These are the input PINs for sound signals. Pin 2 is the negative input terminal, connected to the ground. Pin 3 is the positive input terminal, in which sound signal is fed to be amplified. In our circuit it is connected to the positive terminal of the condenser mic with a 100k potentiometer RV1. Potentiometer acts as volume control knob.

Pin 4 and 6: These are the power supply Pins of IC, Pin 6 for is +Vcc and Pin 4 is Ground. The circuit can be powered with voltage between 5-12v.

Pin 5: This is the output PIN, from which we get the amplified sound signal. It is connected to the speaker though a capacitor C2 to filter DC coupled noise.

Pin 7: This is the bypass terminal. It can be left open or can be grounded using a capacitor for stability.

How to Operate IR Audio Transmitter and Receiver Circuit?

For people who dint get it working the first time, follow the steps to debug the circuit. 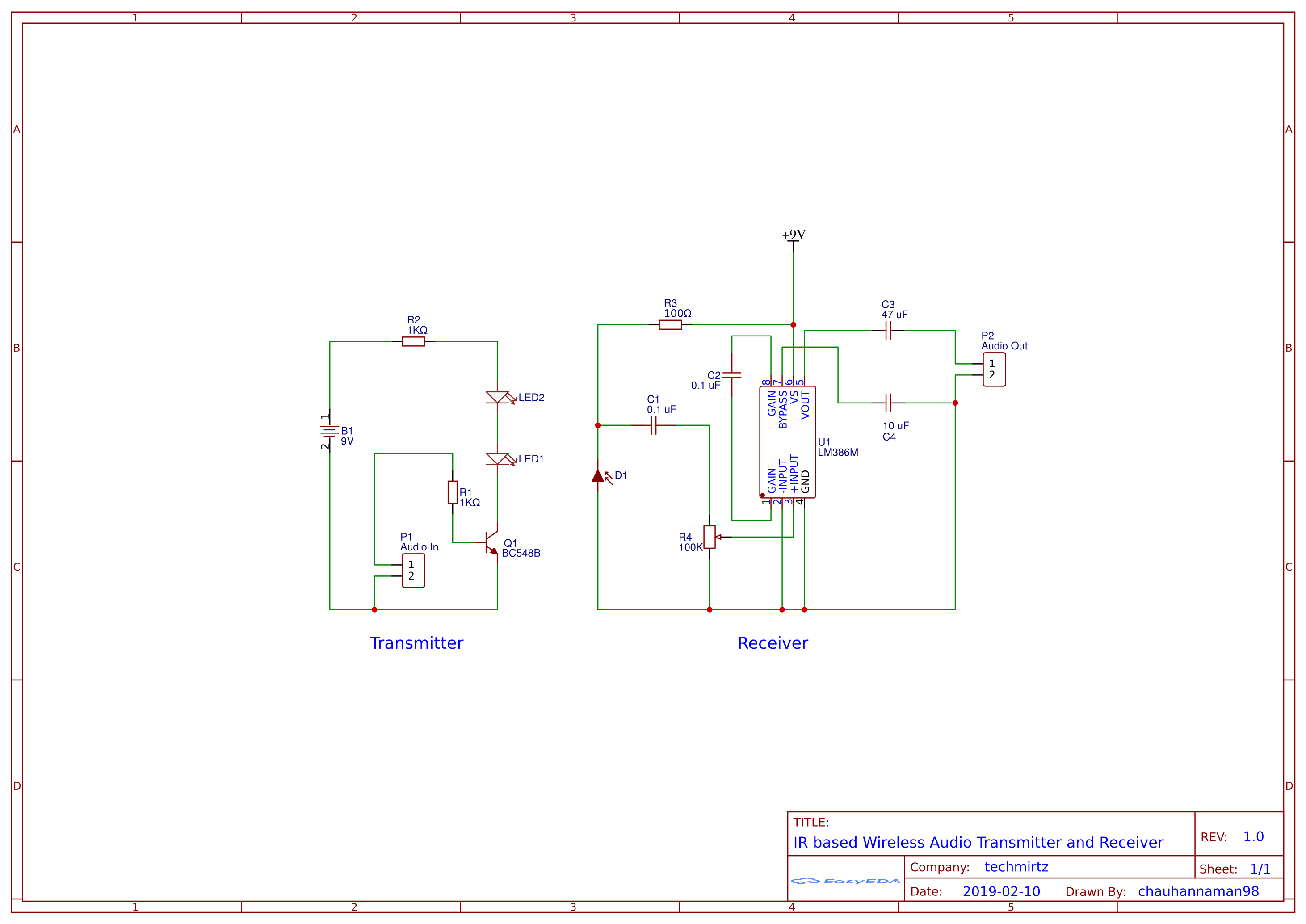