The You See System

The Regents' and Chancellor's Association for Student Disruption
0 191

The You See System 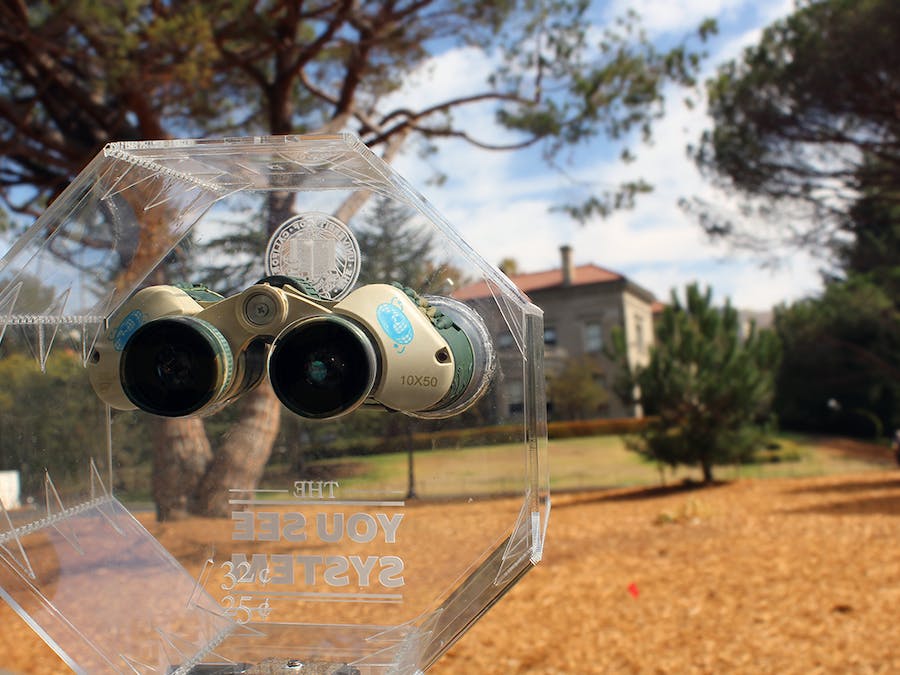 Over the past two decades, the University of California has increased its administrative staff by 250%, decreased its spending per student from $25k to $10k, and proposed tuition hikes of 32% in 2009. It’s bureaucratic, non-transparent, and privatizing at an astounding rate. The University House, which we call the Chancellor’s House (as it’s the home of Chancellor Nicholas Dirks), is the only piece of private property on Berkeley’s public campus. Not only does the Chancellor have a 24/7 security guard, a fence is also being constructed around the property. To draw attention to these issues, we took inspiration off of old tower viewers to create the You See System—binoculars, enclosed in a transparent acrylic case and mounted on a tripod with an “official” letter of notice—and positioned it right outside the Chancellor's House and Fence.

History of the Space

We first brainstormed some tower viewer like shapes on a whiteboard. Finding a happy medium between user recognizability and a thing that was actually able to be fabricated, we chose to use an octagonal shape. We then did a lo-fi cardboard prototype for form finding and testing our joints and eyehole measurements, and slightly adjusted the size of the eyeholes for our final prototype cut from acrylic.

We also drafted a letter satirizing emails Dirks sends out. We left the signature part blank with the plan that participating audiences could sign themselves.

We left the You See System out in the wild for the first time on Monday, Sept 28 from 11am-12pm. About 20 people — maybe 50% of all passersby — stopped to interact with it. By far, the most common interaction was just reading. Stopping, staying at a safe distance, and leaning in to read the letter. Average interaction time was around a minute.

A handful of people actually looked through the binoculars. That being said, we still consider the project a success: almost everyone who was in a group walked away talking about the Chancellor's house and the UC system: we had accomplished our goal of being disruptive, through conversations and awareness. One particular group of two Latinas was really engaged, stayed with the installation for about five minutes, and actually lifted the octagon off the tripod mount.

We even got engagement with the security officer, Sean. Once we set up the You See System more close to the Chancellor's house (instead of at a safe distance by Tolman), he approached us. It was a perfect example of bureaucracy in action: he had to phone in his sergeant, who then had to phone his captain, to make sure the installation was all right. He personally was very chill with the system, did not consider it a security risk, and even looked through it!