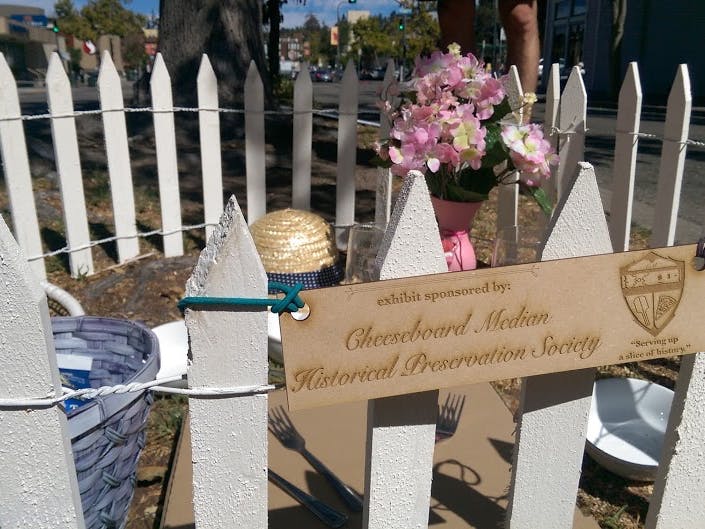 So you're in Berkeley on campus, and hungry for lunch. You could walk down the hill to Sliver, close by. But before there was Sliver, there was the Cheese Board, located just a 15 minute walk from Jacob's Hall, through beautiful hill-winding roads.

For many years, it was hip to grab a pie to go and sit out on the median in front of the space-strapped shop. People reviewed the median on Yelp and Trip Advisor. It was a Berkeley standard. We went to check it out.

The median strip in front of Cheeseboard has a variety of decorative, functional, and authoritarian elements. Namely, it has some trees and plants, some partially-exposed water pipes, and several signs. Two signs (angled to face pedestrians) say "KEEP OFF THE MEDIAN". The other two are angled for cars: one bears a caution for the oncoming pedestrian crossing, while the other holds swappable banners to advertise city events.

To the immediate east and west of the space are the two active directions of Shattuck, which had constant car flow throughout the observation. A few bicycles passed by, but these border roads support mainly car traffic.

Beyond those roads, there are several bustling businesses, including Cheeseboard to the west, and a gelato shop, cooking school, and food court to the east. On the Cheeseboard side, sidewalk access across the road is restricted by the new parklet installed in some parking spaces. The parklet is fenced, and pedestrians must walk around the sides of it to cross the road to the median space. There is no such restriction on the east side.

To the north of the median is a traffic light with a pedestrian crossing.

To the south of the median is an official pedestrian crossing, however it crosses between a post office to the east and a cafe to the west.

We observed the median on three occasions to better understand why people liked sitting there.

Our work was unrewarded. We smelled delicious pizza and pungent gasoline, caught a whiff of the other restaurants across the street from Cheeseboard, didn't detect a scent of food waste or grass. We heard chatter from the local restaurants' outdoor seating, the whoosh of passing cars, and the smooth jazz of Cheeseboard. We found various bits of paper and wrappers, a handful of cigarette butts, a parking ticket for Six Flags Discovery Kingdom, a few bottle caps (some from non-alcoholic drinks, some from stronger stuff), and the King of Diamonds. But no one sat on the median, with pizza or without.

We didn't see a single person sit on the median. Several people used it as a crossing point: we saw several multiple-crossers, as well (for example, the couple who ate pizza, then crossed to get gelato and returned to eat it at Cheeseboard). Most usage was in ones and twos before Cheeseboard closed, when the flow increased to mainly threes and fours as people poured across to the still-open Epicurious Garden.

Again, we failed in our objective. During the morning pastry rush, no one stopped to sit on the median. Traffic flow was significantly increased from the first observation (as people drove to work), lending a very claustrophobic air to the space and cutting down on its use, even as a crossing place. We could smell gasoline in the air, along with strains of coffee and very faint smoke from the Valley Fire. Cars honked in desperation all around the space, trying to get each other to move, and chatter from the Cheeseboard parklet was constant during the observation. We also found a few new items in the space (two empty Gushers wrappers and a receipt from Safeway, a nearby grocery store).

But still no people sitting there.

Alas, it was confirmed - the median was dead. We arrived just a bit after Cheesboard had opened and were excited to see the lunch rush and customers or individuals cross/sit on the median. As we anxiously awaited, we soon came to terms with the idea that no one would sit on the median. We did however see many people cross the median but were sad to realize the median was “dead.” We also began to slowly understand the role of the parklet in the decline of median use but would further validate our findings in the execution of our installment.

We also investigated the median space again and found no new items (but many of the old).

Mystified by the lack of sitting on the median, we immediately waxed nostalgic. Why didn't anyone sit anymore? Was it because it was too hot the days we observed? Is the grass too scratchy, three years into a drought? Was there actually enough seating, now that Cheeseboard had built its parklet?

We considered ideas to encourage people's use of the space as we had observed it:

We dedicated ourselves to preserving the history of the parklet as it once was. We dropped our focus on the way we saw people using it now (as a simple crossing space for transit between two sides of the road), and turned our minds to memorializing its use as a picnic spot.

Our plan was to set up an idyllic picnic spot, reminiscent of the Way Things Used To Be. We headed to Goodwill for some raw materials, and used the laser cutter to create custom-etched wine glasses and signage to spice up the space.Deployment Write Up

While standing on the sidewalk we experienced some patron reactions. The first of which was an old hippy looking man who immediately showed support for our cause and reminisced on how he missed people using the median as a seating/eating area. The second patron we interacted with was an older woman who was quite offended by our doings on the median. She angrily informed us that we were doing wrong to the Cheese Board Collective by encouraging folks to use the median and that what we were doing was a safety threat. In general most patrons from the Cheese Board Collective and driving by perceived our installation as a road side memorial of sorts, probably because of our flowers we had siting out. This we decided was okay though, since the site was intended as a memorial for what the median had previously been used for.

Our work completed, we gave a class presentation. You can check it out below. :)

1 project • 0 followers
Sometimes I make cool stuff. :)
ContactContact
Thanks to phrixxxus on DeviantArt.