This is a Raspberry Pi Zero-based time-lapse photo / video camera to monitor plant-pollinator interactions in the field.

This is a Raspberry Pi Zero-based time-lapse photo / video camera to monitor plant-pollinator interactions in the field. 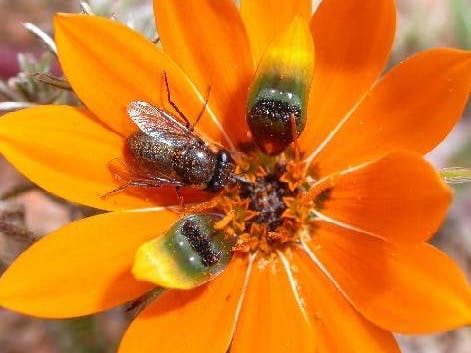 Have you ever walked through a meadow, gazing at all the flowers around you, wondering why there are so many different types of flowering plants? So far, more than 352000 different species have been described, and there are still many more out there awaiting discovery. One of the main reasons for this diversity is the often very specific interaction of flowering plants with the animals that visit and pollinate their flowers. Pollinators often have very clear preferences regarding flower colour, scent, and shape, and slight changes in these signals can dramatically change the attractiveness of a flower.

We are a bunch of biologists studying the fascinating world of plant-insect interactions. Our study system is the plant Gorteria diffusa, a daisy from South Africa with a particularly nifty pollination trick: It has bright orange flowers speckled with black, hairy spots, which attract both males and females of the bee-fly Megapalpus capensis. While female flies are mainly interested in slurping nectar, the males are (how else could it be), mainly interested in females. Sometimes, they mistake one of these black flower spots for a female and start copulating (yes, copulating) with the flower.

In summer 2019, we went to South Africa to to get some footage of this scandalous pollinator behaviour. Unfortunately, Gorteria grows rather remotely in the semi-desert of Namaqualand. So instead of grilling some poor students under the African sun, we decided to build and program autonomous Raspberry Pi-based photo and video cameras. As we were far off the beaten track, and our coding usually makes computer scientists cringe, we decided to keep this project as simple as possible.

To capture both the preferences and the behaviour of pollinators, we aimed to build cameras with the following specifications:

The main focus of the project was to get as much flexibility and runtime as possible while keeping down the price, dimensions, and environmental impact. We thus opted for the Raspberry Pi Zero with its proprietary camera, and evaluated the runtime of several rechargeable batteries. Initially we opted for a system with a voltage regulator allowing to connect both Li-ion and Li-Polymer batteries, but since most Li-ion power banks are now fairly cheap and have an output of exactly 5V, we decided to drop the regulator to reduce the risk of failure.

Since we are only using pre-assembled parts, the assembly and programming are a piece of cake:

Camera "assembly" in the lid of the box. As simple as it gets for working in a remote place.

The behaviour of the camera is controlled by adjusting the input variables in the camera_script.py script. Consider power bank capacity and SD card size when choosing parameters to prevent SD card corruptions. Also, remember that the pictures and videos will be saved in a new folder whenever the Pi is rebooted. In the field, we would simply access the script by popping the SD card in a laptop with a Linux OS, but other options such as ssh into the Pi, or connecting a small LCD screen to the GPIO pins might also be worth a try.

To reset the system after downloading the photos and/or videos, delete the BOOT folders and the NR.TXT file.

Fieldwork experiences with the camera

After 42 South African sunrises, 3500 Km pad, 36 experimental plots, 540 flower arrays, 3356 sheep, 7 eagles, 4 snakes, and 53 l rooibos we can state that we were positively surprised about the overall performance of the cameras (and especially the power banks!). We have experimented with various photo and video settings, and decided to do 3 × 30 min intervals of 1 frame/sec photo series in our final experiment. This has left us with more than 400000 flower photos, mounting up to more than 3.5TB of data, which are now awaiting processing.

Our field setup (here with an array of flowers mounted on a beer crate): The camera box is attached to a shelf bracket mounted to a fence post with plumbing clamps.

However, it would not be fieldwork if everything went according to plans, and we obviously learned various lessons down there:

After fieldwork, we tried to learn from these lessons, and built a new version of the camera that should address all observed issues:

Once these corrections were done, we got a little nuts, and started adding more functions to the camera. These things obviously increase the power consumption of the unit, but the power banks should be able to deal with this.

The assembly of the second camera version is a bit more tricky, but still doable by anyone who managed to assemble the first version:

Pretty much all the parts needed for the assembly
The intestines of the dummy cctv camera, featuring a battery holder and cables from the solar cells to power a tiny led in the front and fool all those criminals
The camera with all the unnecessary parts gone
Screen and fan mounted to the bottom of the silly plastic box from the Pi camera. Yes, we recycle here.
The plastic box screwed down to the camera body.
Everything in place...
This time we are using velcro instead of tape to be able to move the Pi around a bit, giving access to all the USB and HDMI ports.
Front of the camera: The taped real Pi lens surrounded by many fake led's
Fan attached!
Environmental sensor sticking out of the camera rear. Take notes of the cable colouring!
This image shows the correct wiring of the sensor to the Pi. Refer to the image above this one for the colour code.
This image shows the correct wiring of the display to the Pi.
The complete unit from above.
Getting a bit tight in here with the 5000 mAh power bank.
Read more

1 project • 2 followers
ContactContact
Thanks to Boris Delahaie and Allan Ellis.