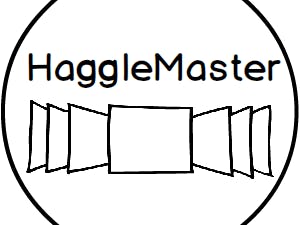 First, we'd like to redefine our target users from last week's group brainstorm (GRP01) to be a bit more specific: non-native travelers, visiting foreign countries with a large haggling culture. There is not much incentive for native people to need this app since they're already familiar with the price range for most products, and they most likely know how to haggle since it's part of their culture.

There are two main goals of this app: 1) to help our target users become more familiar with haggling and bargaining for goods in foreign countries, with the aid of a friend who can support, encourage, and advise the user without doing the haggling for them, and 2) to protect target users from getting taken advantage of in a foreign place as well as making them more knowledgeable of what kind of prices to expect.

The app is based on a buddy system between two friends who are searching for a product of interest. One friend (friend 1) has a smart watch on while the other friend (friend 2) has a smart phone in hand. They approach a vendor, and friend 2 would open the app on his phone to check what recent and average prices are for this product as well as what other vendors with the same product nearby are selling their product for. Friend 1 is the user who would be engaging in haggling with the vendor, and after friend 2 see's the price information, he/she would send that information to friend 1's wear device. It would give friend 1 the idea of what range he/she should aim for. As friend 1 and the vendor are haggling, friend 2 would send advice and suggestions to friend 1 through the handheld/wear connection, until they settle for a price with the vendor. While friend 1 is buying the item from the vendor, friend 2 can immediately upload an image of the product, a small title and description, and the price of the item, to let future consumers know what the last sold transaction was.

On top of the three main task views, here are other views users will come across while using our app on the wear and the handheld.

How did you make it?

Any interesting techniques you came up with?

Will the smartwatch provide input only, output only, or both?

Will you be using any APIs?

What problems might you encounter? (How feasible is it to build this?)

8 projects • 6 followers
Hi there, my name is Jordan!
ContactContact