This project is about a tiny (8mm x 10mm) breadboard-friendly breakout board for NeoPixel LEDs which can be stacked and soldered.

This project is about a tiny (8mm x 10mm) breadboard-friendly breakout board for NeoPixel LEDs which can be stacked and soldered. 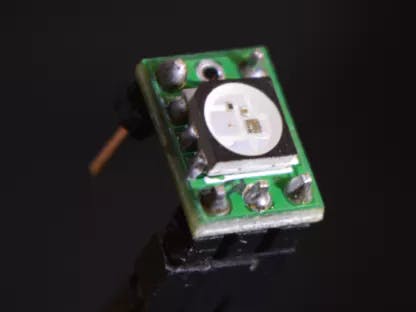 This tutorial is about a tiny (8mm x 10mm) breadboard-friendly breakout board for NeoPixel LEDs which can be stacked and soldered onto each other. It also provides much more structural rigidity than a thin LED strip in a much smaller form factor.

NeoPixels are really cool RGB LEDs to tinker with, they have a built-in integrated circuit (WS2811) which can be controlled through a Data Line by just using a single wire interface.

The online community around these are quite matured, there are many tutorials and libraries for Arduino and ESP32 to reduce the beginner's hassle and makes it an easy peasy job to program the LEDs. So if you have never got into NeoPixels, I invite you, join the club and you will not regret it.

If you have ever tinkered with NeoPixels you may know that most of the projects and applications use them as not so rigid strips which can be daisy-chained. Problem with those strips is their inability to withstand rough usage, let say if you want to solder and de-solder them 100 times, it is unlikely that thin substrate would stand up to that, in short, those strips are fragile and cannot bear shearing force. The breadboard unfriendliness of the strips is quite discomforting if you want to plug them into a microcontroller or even for basic tinkering, sometimes it is much handier if you can plug it on a breadboard and go with it.

That leads me to this Adafruit's breadboard version of the LED, but after looking at it, I thought it is bigger than it needs to be, during the same time I came across the datasheet of another version of the NeoPixel which is WS2813B, this is a 6 pin LED instead of traditional (WS2812) 4 pin one. And the best thing about it is that you don't need any external resistors or capacitors which would reduce the size of the breakout board even further, plus for someone who is a DIY enthusiast like me, soldering SMD resistors and capacitors are quite a pain in the back and consumes a lot of time.

So I designed PCB breakout/module for WS2813B NeoPixels which can be chained or stacked and soldered de-soldered as many times you like. Plug it on a breadboard and you are ready to go.

Enough talk, let us get to the build.

1.) Soldering Iron and Solder Wire - I used a small one with a tiny tip as the pins on LEDs are quite hard to reach if you do not have an appropriate iron bit.

2.) WS2813B - I bought it from www.LCSC.com price varies with quantity. As explained in the intro, these LEDs are different than traditional NeoPixels and have 6 pins, 3 on each side, on contrary to old WS2812 with 4 pins. WS2813B do not require any external capacitors or resistors which makes it far easier to tinker with.

3.) PCB Breakout - About 1.3 cents each. This is the heart of the project and explained further in the next step.

Step 2: The PCB and Gerber Files

This is what sets this project apart from other NeoPixel projects, a unique tiny PCB big enough to be breadboard friendly yet small enough to save a lot of space. Considering how cheap PCB prototyping is getting these days, I thought to try my hands on it for the first time, it was one of the motivations behind this project, to design and order professional PCBs.

There are countless good manufacturers out there, but I went with JLC PCB because it was recommended by GreatScott! and Dave from EEVblog. As a first timer, I was a bit confused for messing things up, fortunately, everything went great and a few days later I had my PCB panels in hand.

Because PCB is so tiny, we have to Panelize it, i.e a bigger panel will consist of multiple PCB boards, it was easy to do on the manufacturer's website.

Unless you are soldering for the first time, this should be pretty easy, put some solder on one of the 6 pads, place LED on the top as shown in the picture, then slowly touch each pin of led with solder wire and iron, LED will get soldered in no time.

You can easily stack LEDs on top of each other and just after a bit of alignment solder them together, as shown in the photo.

Here is what I made by soldering them one after the other.

Your Imagination is the limit for how you will use the breakout board.

27 projects • 37 followers
I'm from India and love making projects on electronics and especially with Arduino.
ContactContact