A series of realtime video tutorials showing how to get OmnIoT SoftHub sensor data to/from a Thingsboard dashboard, no programming required!

A series of realtime video tutorials showing how to get OmnIoT SoftHub sensor data to/from a Thingsboard dashboard, no programming required! 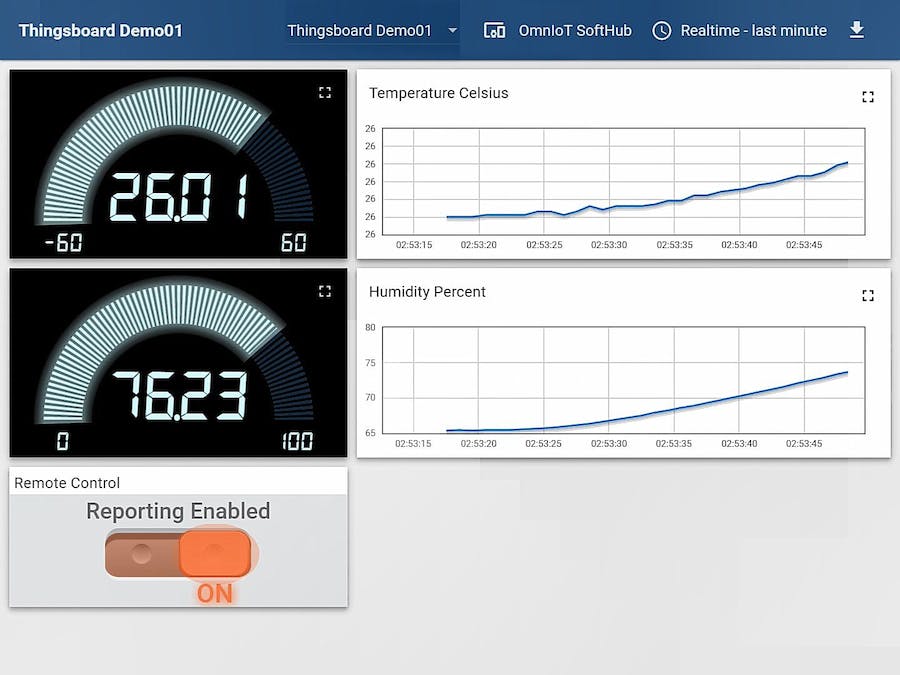 In this project we illustrate how, using realtime videos, you can get sensor data to/from a Thingsboard dashboard using the OmnIoT SoftHub's MQTT functionality in just minutes time. If you are unfamiliar with the SoftHub, it is a Hub/Gateway Platform that allows you to create and deploy many typical IoT scenarios very quickly and without doing any actual programming. Instead of writing code, the SoftHub incorporates an object based rule engine that allows you to configure your application by defining rulesets to be executed. The rulesets are created using a provided SoftHub Configuration Utility. The SoftHub is free for non-commercial use and a full working copy of the installation package, including documentation, can be downloaded from the support page at the OmnIoT website (www.omniot.com).

The tutorial is broken up into three video sections -

In the video below we'll go through the following steps -

To keep things as simple as possible we're sending our data to the public Eclipse test broker and we'll use the MQTT.fx utility to view the packets. The public Eclipse broker simply echos all packet data received to the same topic the client device publishes from, so the data you see will be the exact JSON data sent from the SoftHub device.

One issue when sending data to the various third party cloud platforms is that many, while being compliant in terms of the MQTT communication protocol, will none the less require your sensor data be sent in a format specific to only that platform. When communicating with remote MQTT brokers, the SoftHub produces generic JSON formatted packet data by default. In order to mitigate this issue, the SoftHub allows you to reformat your outgoing packet data "on the fly".

To visualize our sensor data on our Thingsboard dashboard, there are three sets of changes we needed to make from the previous example on the SoftHub. The first is to modify the "Publish Data" action object to connect to the Thingsboard broker (instead of the Eclipse broker) and to associate the connection with a .mcfg (MQTT extended options) file. Next we'll create the .mcfg file which is needed to specify any .jff (JSON filter/format) files we'll require to transform our outgoing packets. And lastly we'll create a single .jff file, in which we'll specify the transformation to be made on our outgoing packet in order to be compatible with the Thingsboard broker's requirements.

Changed the RuleEngine.xml file (all updates to the Publish Data action object only)

In this video we expand on our configuration example above by adding a control widget to our Thingsboard dashboard. Thingsboard control widgets allow you to remotely control your SoftHub device(s) from any cloud based Thingsboard dashboard. To keep the video brief, we illustrate a simple example where we've added a switch allowing you to enable or disable sensor data reporting. In watching the video it should be apparent however that the same technique can be used to control any of the SoftHub's functionality, including the ability to issue Linux system commands or initiate the execution of your own scripts.

As with our previous examples, the changes required to implement this functionality are made in "real time" and take only minutes from start to finish.

To add our remote control functionality we only needed to change the RuleEngine.xml file on the SoftHub. There are two methods of mapping incoming control messages to SoftHub User Defined Events. The first method involves modifying the.mcfg file to search incoming messages for a specific string fragment to be mapped to a User Defined Event name. The second, used here, is to change the message sent from the dashboard control widget to include the User Defined Event name directly (prefixed with a "UEV_" tag). See the SoftHub documentation on the OmnIoT support page for details of both approaches.

For our RuleEngine.xml file we made the following changes -

You can download the files used in example 3 video HERE.

In this tutorial we configured and deployed rulesets to display our sensor data and remotely control our SoftHub from a Thingsboard dashboard in just a couple of minutes. While we kept the example as simple as possible, both the OmnIoT SoftHub and the Thingsboard platforms provide far more functionality to aid you in quickly building out your IoT edge infrastructure. You can check out more info regarding the OmnIoT SoftHub HERE, or the Thingsboard platform HERE.

9 projects • 4 followers
Founder of OmnIoT.com, a provider of an easy to use IoT edge infrastructure platform.
ContactContact