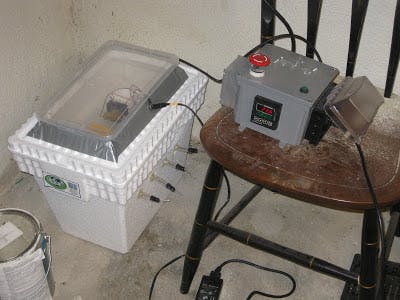 While on vacation I impulsively bought fertile chicken eggs from a farm stall. Needing to incubate them immediately, I cobbled together a rudimentary incubator from a styrofoam cooler and a few bits and pieces. A PID controller was the perfect device to govern the temperature.

An incubating egg requires at least three things of its environment: a stable temperature, an appropriate degree of humidity, and adequate ventilation. The most critical variable is temperature, which for chicken eggs should be within half a degree of 37.5 °C (99.5 °F). The simplest form of incubator is an insulated box with a heat source and a thermometer.

For the container I chose a Styrofoam ice chest. At $5 from a local drug store it was cheap enough to be disposable, and big enough that a dozen eggs could lie on the floor without touching each other. The walls were thinner than I would have liked, though, so the cooler would need some extra insulation.

The brains of the incubator was a PID temperature controller that I had built for my electric smoker. (A previous incubator that I made used a simple on/off thermostat with low hysteresis.) For this application I favoured low voltage for safety reasons, so I used the temperature controller to provide 12 VDC via a laptop power supply. The 12 V outputs were connected in parallel to a power resistor acting as a 20 W heating element and a PC fan that helped circulate the warm air. The fan also moistened the air by blowing over a dampened sponge that was held in a plastic dish.

The fan, power resistor, and sponge were all housed in a shoebox-sized clear plastic box with a lid. I removed sections from the bottom of the shoebox so that air could move freely in and out. Then I cut a rectangular hole in the lid of the styrofoam cooler and wedged the shoebox inside, sealing it in place with duct tape.

The picture below shows the incubator lid assembly together with a PT100 temperature probe that connected to the PID controller. I put the PT100 temperature probe into a small container of liquid (a hotel miniature shampoo bottle, with the cap fixed on with duct tape) which nestled in amongst the eggs. I hoped this would give more stable temperature readings than measuring the air temperature. I had previously calibrated the temperature in icy water but also checked its performance with my Thermapen which was certified accurate to 0.2 °C — sufficient accuracy for incubation.

For ventilation, I budged a few holes in one side of the cooler with a hot screwdriver, then wedged short lengths of PVC tube into the holes and fixed them in place with hot glue. Some electrolytic capacitors that fit the tube diameter served as corks. These resealable holes would let in fresh air and vent excess humidity.

During incubation eggs gradually lose water at a rate that depends on the relative humidity in the incubator. Too much or too little water loss can affect the chances of a successful hatch. I decided to build my own hygrometer to check the humidity, but alternatively you can candle the eggs to assess the size of the air bubble, or weigh them to see how much moisture they have lost.

Lastly, I put the cooler in a corner of the basement away from draughts and sunlight and swaddled around it with blankets and foam mats. It was particularly important to insulate the base of the cooler from the cold floor and to cover the lid of the cooler where the polystyrene insulation had been removed. With eggs in the cooler and the PID parameters adequately tuned, the temperature crept up to the set value, wobbled for a few minutes, and then held the temperature rock solid.

There are many ways in which this incubator could be improved — it would be nice to have better insulation, a more powerful heating element, water dishes below the eggs instead of above, and some means to add water and turn the eggs without opening the lid. But for something knocked up on a Sunday afternoon, I was reasonably happy with what it was.

Pretty much everything that I know about incubating eggs derives from either the Brinsea Incubation Handbook or the Back Yard Chickens forum.