From 4th to 10th prize
The Arduino Internet of Holiday Things

*Must have internet connection

I live in the middle of wet rainy England and my boyfriend lives in the south of Oregon, USA. This year, they had so much snow, it looked like a winter wonderland. I was so jealous, I mean just look how pretty it is here. We joked how we need an IOT device that turned the snow on and off, as he hated it but I loved it... cue lightbulb moment.

I had previously played around with the Arduino uno and wifi shield, but as this project would be outdoors (mum said that I can't get snow in the house), I wanted to use a wireless connection. I've been looking for a while for a reasonably priced method of wirelessly connecting to the internet and after googling around for this project, I was really excited to hear about the MKR1000, as well as the competition.

My go-to was to use a simple wifi server sketch, but then I thought it would be more interesting if my boyfriend could turn on the snow. Using the Web client in WiFi101 examples, I adapted it so it connected to a txt file on a server and looked to see if there was a 0 or 1. I then made a website that would write 1 or 0 depending on if the on or off button was hit respectively.

Now the Arduino was all setup, I just needed to connect it to snow. I couldn't find the right adapter to plug it into the clouds so I made a snow machine.

Well I tried to make a snow machine okay 😂

So version 1 is a hairdryer and a plastic 2l bottle with the ends cut off, using magic snow (powder that you add water to)

Shoutout to my dad here. It's good having an electrician in the family.

My MKR1000 could turn an LED on, but I needed it to turn on my "Snow Machine" aka my hairdryer. I tried using a relay. I read on the Arduino website that the board runs at 3.3V, so I used a 5V relay on a board that can be reliably triggered by 3.3V. This was soldered to a 240V AC socket that I could plug my hair dryer in. Worked a dream!

I went to test this with snow (note, this is where I used up all of my magic snow) and found that when I turned on from the website, the snow machine kept flicking on and off. My dad thought it was due to the relay so we added a solid state 2-480V relay and added a power supply to that. We then realised the problem was due to wifi connectivity issues in the garden so it would probably work fine with just the 5V relay.

Unfortunately because of time differences and running out of snow, my boyfriend didn't get to turn on the snow machine.

We left the solid state relay in so I can play around with this device using other appliances in the future. Next stop the oven for IoT pizza. But for now, time to clear up all the polystyrene/snow in my garden. Going to need more to build a snowman.

As I didn't have enough snow to run the system for long enough to show it being turned on and off by the website, I turned a lamp on to demonstrate it working. Keeping with the holiday theme, I tried to make the lamp light be the star on a Christmas tree but my printer had run out of green ink. This is demonstrated in the video above. 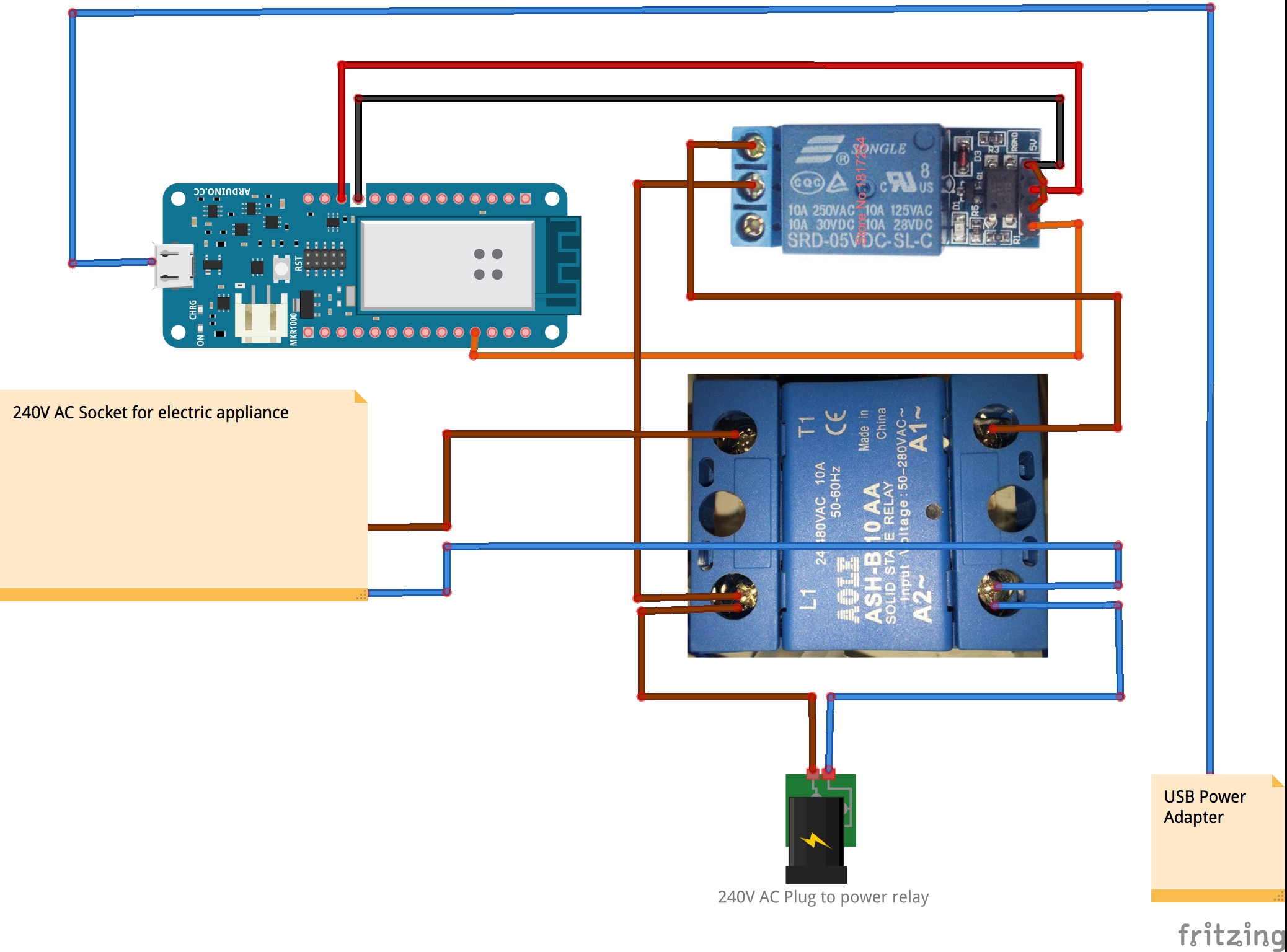 From 4th to 10th prize
The Arduino Internet of Holiday Things