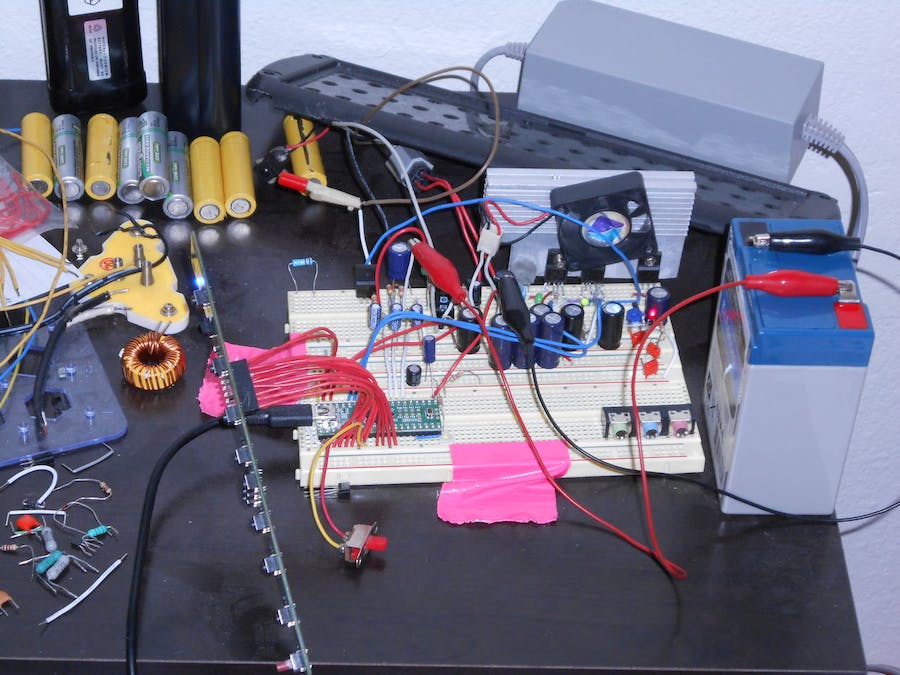 what it is and does

this is a project in the works and has no specific goal other than suit my needs when i need them. the program is in arduino format running on my Teensy++ 2.0 What it currently does now is control voltages i do have a plan for it to control a sound processor to my pc speakers but i have to get it a proper display first, it is currently saying things to the serial monitor on my pc.

it has 3 voltage inputs the first is for general purpose and the other 2 are for monitoring output current and voltage for adjusting the PWM of the power transistor to match the user inputed values for voltage and current. the transistor is powered by the teensy via a transistor transformer (commonly found in tv's) wich can turn say 12v and drop the voltage to about 3 volts with a higher amperage for the base (or gate) of a transistor. this transformer is powered by a smaller transistor hooked to the teensy via 470ohm resistor.

it also controls 2 linear voltage regulators (a 3050 and 3090) they are turned on and off by the teesny directly via their enable pin (a 78R05 has the same feature for example) and for the teensy's 5v it has a 78RA05 that can be finely tuned via a pot, that then goes to a cap and a diode to the teensy so that i dont have to turn off the 78RA05 when i plug in the teensy to usb, i then fine tuned the regulator to output an almost perfect 5v because the usb is about 5.2 or 5.3 volts that way the regulator is lower and power doesnt go back into the PC.

these regulators and transistor are cooled with a thick heatsink from a computer PSU and a small 1.5" fan PWM'd automatically when it detects it heating up, the thermistor isnt calibrated to any form of degrees just the ADC values directly, it will speed up the fan when it sees the ADC value lower (thermistor getting hotter) and it will set the fan to max (70 because there is no need to go any higher) if it goes below a certain value (hot enough to hurt when touched) it will turn off the regulators and will also turn off the transistor when it gets hot it says so in the serial and turns the light to orange (more about the dual led in a bit).

the button board is from a direct tv cable box with 11 buttons and SMT pullup resistors so all i have to do is plug the pins in and write the code. the board also has an ir demodulator so that my teensy can recieve commands from a remote, though i havent needed to use the remote much so i have just left the code there incase i do (wich means you wont see alot of the new functions controlled by it).

it has a red+green led for power status (both on for orange) and the blue led on the button board connected to the pin i originally used to control a computer PSU but am no longer using it. it also has a led on each of the regulators rail and i tried to put one on the transistor transformer but it isnt working currently.

the switch mode power supply is from a wii rated 12v@3.7A it has short protection and a nice clean output.

i hope you all can understand this as it sure is a lot to say in words :) im sure there are alot of areas for improvement and i would love it if anybody had some cool ideas i could add in! i am currently working on making a computer interface for it but i am having trouble with the serial communication among other things.

in 0_5 i have updated the code to make more sense on the serial monitor, and am showing it charging an 18650 battery it works fine when i have it limited to 4.1v as it will go over 4.2v which is bad for a li-ion, it isnt the most accurate and jumps around alot which i think is from the internal reference portion so i will have to see what i can do. it can also receive a float which goes to the voltage limit so i dont have to wait for it to get there.

incase i dont put pics here i have them here http://postimg.org/gallery/6q30jf8u/

2 projects • 2 followers
your above the norm white guy who loves to experiment and try new things, especially interested in SMPS or DC to DC converters.
ContactContact