How to control a 12 volt fan from a raspberry Pi using a TIP120 transistor.

How to control a 12 volt fan from a raspberry Pi using a TIP120 transistor. 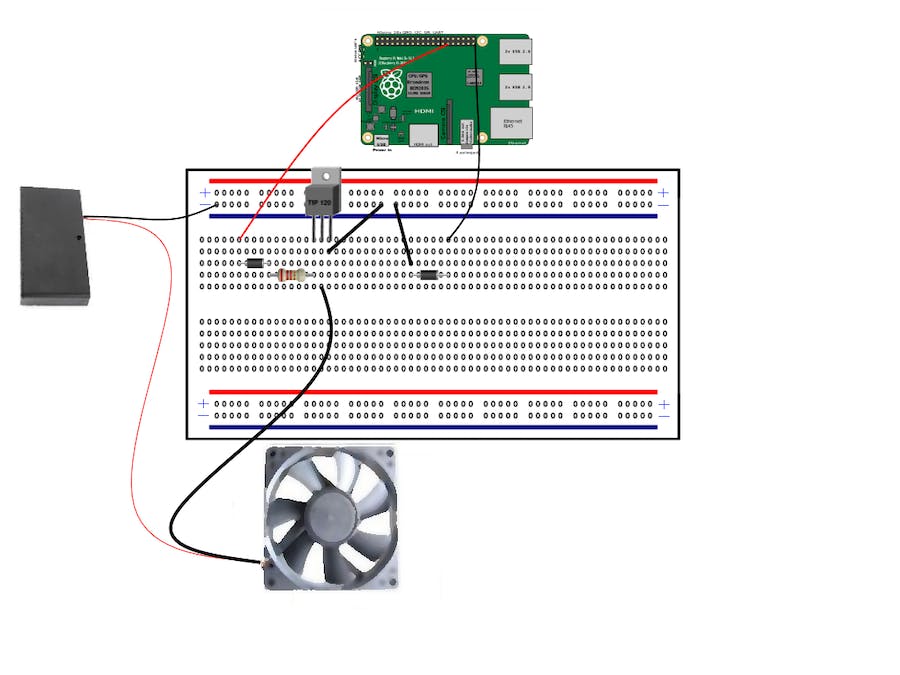 I wanted to be able to control a 12 volt fan or other apparatus from a Raspberry Pi and was not sure how to do this. I do not have an electrical engineering background. In college, many years ago, I took a course on assembly and  some physics classes, but even with this experience,  I did not really know where to start. So I started researching and hacking.

The Raspberry PIs 5th GPIO pin is attached up to a diode, which is then connected to a resistor that is  connected to the base of the transistor. If the 5th GPIO pin transmits a positive current the fan turns on.

The B or Base is the application that applies a small current to turn on a larger one, the collector is for the larger current. For a tip 120 transistor this can be up 120 volts. Then finally there is the emitter which needs to be connected to a common ground. Yes, the Raspberry Pi and the fan must have the same ground… this would be intuitive to someone with background in circuitry but to me, the Apprentice to the Apprentice of the electrical engineer not so much.

Warning: Make sure to use diodes when using transistors or the Raspberry Pi will be short lived.

Next part of the circuitry is using a diode. A diode is a one-way street for electrons, when using transistors we need to use diodes to block reverse current from coming back from the high voltage appliance/fan back to our controller, in this case a Raspberry Pi. If a 12 volt current was applied to the Raspberry Pi, it would short it out.

Changing the battery back to output 12 volts instead of 18.

If all the batteries are inserted into the battery pack it will output close to 18 volts, The fan that  is being used, is designed to run on 12 volts. To meet the requirements of the fan, two of the batteries were remove and replaced with two bread board wires. Once this was implemented, the battery packed outputted 12 volts of current.

All the Source Code for this project can be found on