We had an very hot summer this year in Belgium. Can the heat-recovery ventilation unit help to reduce the temperature in the house?

We had an very hot summer this year in Belgium. Can the heat-recovery ventilation unit help to reduce the temperature in the house? 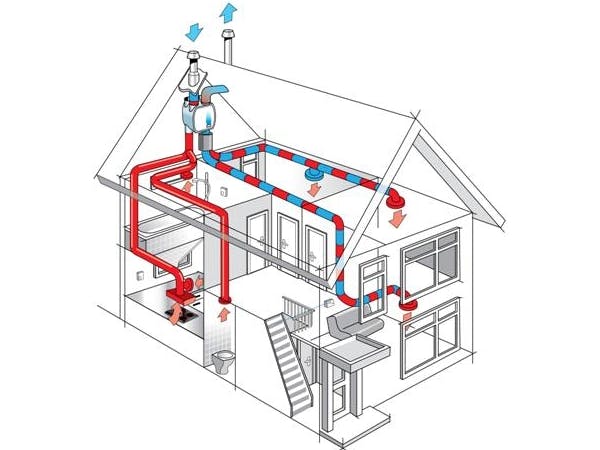 We had very hot summers in Belgium this and last year. When we returned from vacation, the house had heated up and it was impossible to cool it down as the hot weather continued.

This made me wonder if the heat-recovery ventilation unit's bypass system that should inject cold air into the house during the night is working properly and if it can be made to work better.

The ventilation unit generates and controls two air flows : the indoor-to-outside flow carrying moisture and CO2 and the outside-to-indoor fresh air flow. In normal working conditions the unit will extract thermal energy from the indoor-to-outdoor air stream and inject that energy back into the outdoor-to-indoor air stream, like illustrated below.

The system has 3 working levels. At present it is always at level two because it generates too much noise at level 3 for my family members to be able to fall asleep and because the cabling and the control algorithm to switch the working level are not in place

The unit has a bypass system that allows it to inactivate the heat exchanger during summer nights when the outside air is cooler than the inside of the house and when the house needs to be cooled down.

These are the things I have to evaluate/monitor in order to get answers to my main question :

To get answers to my questions, I need to monitor temperature and humidity both before and after the heat exchanger on the two air streams, monitor the status of the bypass and have the ability to set the working level depending on temperature conditions and time.

I used Si7021 sensor chips before, these would be ideal to monitor the temperature and humidity of the air flows.

After some testing with an old Gertboard, I found that the working level of the ventilation unit can be controlled with the ULM2803 open collector driver chip of the Gertboard.

That leaves the detection of the bypass operation to be tackled. The bypass is commanded with a 230V ac signal. After some Googling, I found some circuit examples for detecting 230V with a 3.3V controller, but none of them were satisfactory. As I didn't want to spend too much time on this challenge, I decided to go low-tech and use a simple relay to do the level conversion.

In Comes an Arduino

A mayor challenge in this setup is that the i²c address of the Si7021's is fixed. It is easy enough to read out one sensor directly from the rPi (Raspberry Pi), but more than one causes an i²c address collision and the rPi has only one i²c bus. There's a number of workarounds for this

I decided to go with the last option because I have a number of Arduino's laying around and wanted to avoid buying more kit.

An Arduino can have any number of i²c busses thanks to the (many) soft-i²c libraries. The downside of this option is that it requires communication between the rPi and the Arduino. The options for this are : i2c, SPI, UART,... I decided to go for UART communication.

UART serial communication has a reputation for being tricky in essence because there's no protocol stack that cares for error correction like there is in the TCP/IP stack.

I decided not to use any helper libraries like Firmata (which add their own level of complexity), but to take some precautions to avoid the common pitfalls

Here's how I designed the communication protocol between the two devices:

The Arduino will cycle through 6 steps (4 temperature sensors, set working level feedback and digital inputs) every few seconds and outputs.

I only need 1 measurement of each sensor every five minutes, so there's plenty of room for errors in the communication. As long as there is a CR symbol once in a while, the communication will automatically align. The CR symbol will appear regularly, so there's ample time for things to settle down after an error.

This one is even simpler as there is only the working level to be sent over: the rPi will send 1, 2 or 3 + CR to indicate which working level must be activated.

After initial tests with a breadboard and jumper wires, I decided this is not the way to go for the final product, so I needed to design a PCB.

Breadboard setup for the Arduino + 4 sensors

I used Fritzing before but while trying to design the board, I came to the conclusion that Fritzing would fall short for this one. I used KiCad instead.

The schematics is attached as a file, below is a snapshot of the PCB design.

I scambled to get the order out before our holiday and the day after we returned, the PCB was in the letterbox. What a great era to live in!

This is how it looks after soldering the components

Here's a picture of both device "installed" on top of the ventilation unit. I know, cable management is not my strongest point :-)

Great! Now we can move on to the interesting part: developing software

Thanks to SparkFun's software i²c library, the Arduino firmware turns out to be compact and simple. Nothing complicated, just cycle through the 6 steps, collect measurements and format as decided in the protocol design. The .ino file is attached.

I use minicom to test the board with the Raspberry Pi. Thanks to the simple protocol, all I need to do is watch the measurement values come in and hit 1, 2 or 3 + <Enter> to change the working level of the ventilation unit.

I got into the habit of using nodejs for this type of code. As usual with nodejs, the code is compact for what it's doing. Basically it monitors the serial port, disregards anything that doesn't look familiar, parses everything else and temporary stores the received measurements. Every five minutes, the last received measurements are pushed out to an MQTT broker and stored into an InfluxDb database.

Here's how one of the event handlers works (extract from app.js)

The callback function in parser.on('data', callBack) is called whenever a \n symbol is received on the serial port. The sensorRegex regular expression will match any string that starts with a capital 'S' followed immediately by a one-digit number and followed by two floating point numbers. Any part of the regular expression between round brackets (called capture groups) is extracted from the string and returned in the sensorMatch[i] statements.

I use PM2 to deamonize node.js apps. It's a super tool, check it out.

The working level of the unit can now be controlled by sending MQTT packets to the Raspberry Pi. This will have to be done by an algorithm running on the NAS in the future, but can be tested by using a program like mqtt-spy as shown below.

The heat wave is gone now so I'll have to wait till next summer to make final conclusions, but here are some preliminary ones:

The above graph is produced with Grafana on top of an Influx database running on my Synology NAS. The colours are purple: outside temperature (measured with a sensor outside the house), light-green: air extracted from the house, dark green: extracted air after the heat exchanger, light-blue: fresh outside air entering the unit, dark blue: fresh air behind the heat exchanger.

The activation and deactivation of the bypass can be observed in the dark green and dark blue lines.

Before 11:30 the bypass is active: the dark blue line is relatively close to the light green line as there is not much energy extracted from the extracted/expelled air flow. Between 11:30 and 14:00 the bypass switched off and on three times, When turned off, the dark green line jumps up and the dark blue line goes down because energy is exchanged between the fresh and the extracted air.

During the night, the incoming fresh air is about 3° hotter than the outside air (light blue vs light green line). This must be because of the accumulated heat in the piping system between the air intake register and the ventilation unit and it is not a good thing. I'll have to make this piping shorter and add insulation.

This one is quite baffling. I have no idea why it is there. There was not heating in the house when the measurement was taken. I suspected the water boiler, but turning it off did not make the wobbly line go flat. Next suspects are the refrigerator or the freezer but these are not so easy to turn off.

The difference between the two temperatures is only a few tenths of degrees but it is very remarkable as it is... a direct violation of thermodynamics laws : heat will never travel from a colder to a hotter object by itself - the heat exchanger is a passive device. The only explanation I can come up with is measurement error. The Si7021's are accurate to within 0.5° so the few tenths of degrees fall within the combined measurement error for the two sensors.