In this project, I'lI show you how to model and simulate a traffic intersection with cross-walk signals and walk request buttons. I built this using the Arduino Uno, some LEDS (red, yellow, green, orange and white), resistors, buttons and ProtoStax Enclosures to house everything. I used a couple of programming tricks to handle the more complex timing requirements of this intersection, using State Machines, and bitmaps to manage the LEDS.

A Traffic Light project is a great and fun way for a beginner to get started with Arduino. You usually start with learning how to turn on and off individual LEDs and have a set delay between them, thereby simulating a traffic light turning from GREEN to YELLOW to RED and back again, endlessly. Here is a simple example:

However, in practice, the science of traffic lights can be quite complex! There can be two or more streams of traffic, pedestrian lights, protected left turns, and much more.

You need to ensure that there is a perfect song and dance between the various lights. The timing between them needs to be carefully coordinated, and is usually determined by studying the traffic flow over time for a given intersection. Based on changing traffic conditions, the timing may also need to be updated/changed over time.

One can also add sensors to the mix to trigger traffic light changes - for example, using an inductive loop embedded in the road, or an ultrasonic sensor, or a video camera to detect the presence of cars to trigger a State change based on current traffic conditions, and not just on a time based approach alone. These are called Actuated Signal Controls.

The science of Traffic Intersections and signals is a fascinating one, and one that offers a lot of interesting project opportunities for Arduino (and other MCU) enthusiasts. I've included a few interesting links at the bottom for you to check out if you would like to learn more about the art and science behind traffic intersections and lights, and to give you inspiration for future projects.

What this Project handles

Traffic Intersection we will model

We use only one set of lights for each stream for the purpose of brevity. You can quite easily add the additional sets (one for each direction of a stream), and have them all coordinated.

So we will model two sets of traffic lights with pedestrian walk signs (one for each stream), as shown below (RED, YELLOW and GREEN for vehicular traffic, and ORANGE and WHITE for pedestrians):

We will also add two buttons - a "walk request" button for each set of pedestrian lights.

Here is the Fritzing diagram for the circuitry:

Thus, you can see that from a hardware perspective, this project has gotten a little bit more complex, with more LEDs and more switches. The lights are not just timed, but also need to handle walk requests. Handling all of these with digitalWrite and delay like the simple example is not going to work for us!

We'll use a Finite State Machine programming concept, and some other programming tricks (like bitmaps to manage the state of the LEDs)

The beginner can get started easily by using the provided code sample and making small tweaks (such as for changing cycle and phase times) but without worrying too much about the intricacies of the code. The intermediate and advanced users can start to modify the code to add more states to the State Machine. Once you understand the concepts, you will find that it will become a lot easier to add more states to your traffic light system - such as actuation based on ultrasonic sensors, protected left-turn turn signals, etc. We will talk more about this below.

I start off with mounting the Arduino and a half-sized breadboard to the base plate of ProtoStax Enclosures. This allows for easy prototyping, while preparing everything to be closed up later.

Arduino and Breadboard mounted on ProtoStax base plates in Platform Configuration

I first populate my breadboard as per my Fritzing diagram, as follows:

1 / 2 • Populate the Breadboard as per the Fritzing diagram above

When I have populated the breadboard appropriately, the next step is to hook up the connections from the Arduino. At this point I have three choices.

I can hook up the Arduino and the Breadboard side-by-side, and finish the wiring, as shown below:

Or I can stack the Breadboard on top of the Arduino. This helps to organize the mess of wires and makes the Breadboard on top more presentable. This will be useful, say, in a science fair or competition where you would like your prototype to look as nice as possible to get maximize marks for presentation! 😊It also puts the focus on the LEDs and buttons (the User Interface) as you explain the concepts and workings of the Traffic Light.

[Note:It is possible to add side walls to the bottom enclosure with the Arduino. I've chosen to keep the side walls out for more open access. I'm also using the side wall slots to help organize my mess of wires! 😊]

Next up, upload the sketch to the Arduino and run it! You can find the sketch on GitHub - find the link to the repository below and follow the instructions on the README.

The traffic lights go on a cycle of green for 5 seconds, yellow for 2.5 seconds, followed by a red of 7.5 seconds (Green 5 + Yellow 2.5 seconds of the other stream). The individual state transition times are easily adjustable, which allows you to experiment with different timings for different phases.

[Note:In real life, the cycle time and phase times are dependent on factors like historic data of flow of traffic, peak vs. non-peak times, and so on. For the purpose of my demo, I chose phase times to be able to demonstrate the concepts quickly! 😊]

Currently, both streams have the same phase and cycle times, but you can easily change that. You could make one of the streams a main stream of traffic (meaning that it has a longer green and yellow cycle) and the other a secondary stream with a shorter cycle, for example.

The logic is implemented by means of a State Machine - the lights transition from one state to another and there are a finite number of such states that we transition through. We can identify the different states of the traffic lights as follows :

Thus we see that there are 4 distinct States to transition through before going back to the first and repeating the process. I have named these states MS_GREEN_STATE, MS_YELLOW_STATE, MS_RED_STATE and SS_YELLOW_STATE. We can see that adding the second stream of traffic has increased the number of states by 1 (where the yellow happens on the secondary stream, the primary stream continues to stay red).

I have also modeled the pedestrian walk signs as sub-states that operate within the context of the same 4 main states (i.e. either staying orange the entire time, or when a walk request is received, to transition between ORANGE, FLASHING ORANGE and WHITE that corresponds with one of the 4 states). You can implement it as a secondary state machine that has its own timing between ORANGE, WHITE and FLASHING ORANGE if you like.

The State Machine approach allows you to reason about the various states and the transitions to the states in an intuitive manner, which allows for easier debugging of any issues and fixing them. For example, I found that I had mistakenly tied the Pedestrian Walk signals to the opposite stream of traffic - it was fairly easy to find and correct the issue.

It also allows you to add more States (for example, if you choose to add a protected Left-Turn signal in one or more streams. Or if you want to model a very complex 6-way intersection with protected left turns! Once you model the various States and their transitions, you can update the logic to handle the new states and the transitions between them.

You can also add sensors to the mix to make Actuated Signal Controls - instead of the timing based state transitions, the states can change in response to a sensor input (which reflects current traffic conditions) while keeping in mind certain minimum times, for example, a yellow light needs to be on for a certain length of time in order to give time for vehicles to clear the intersection, before the opposite stream is allowed through.

The Pedestrian Walk Request buttons can also be used to influence/speed-up any Pedestrian Walk cycles, as opposed to only being activated by the press of the button as is done currently.

Optional Resources to learn more about Traffic Lights and Intersections

I hope you have enjoyed this project. As you can see, traffic lights are an area where you can go as simple or as complex as you like! I also hope you have learnt a few neat tricks by using the State Machine approach to modeling the traffic light transitions! The code sample also uses bitmaps to enable specifying which of the entire set of LEDs to light up, in a compact manner.

Feel free to write back with questions or comments! 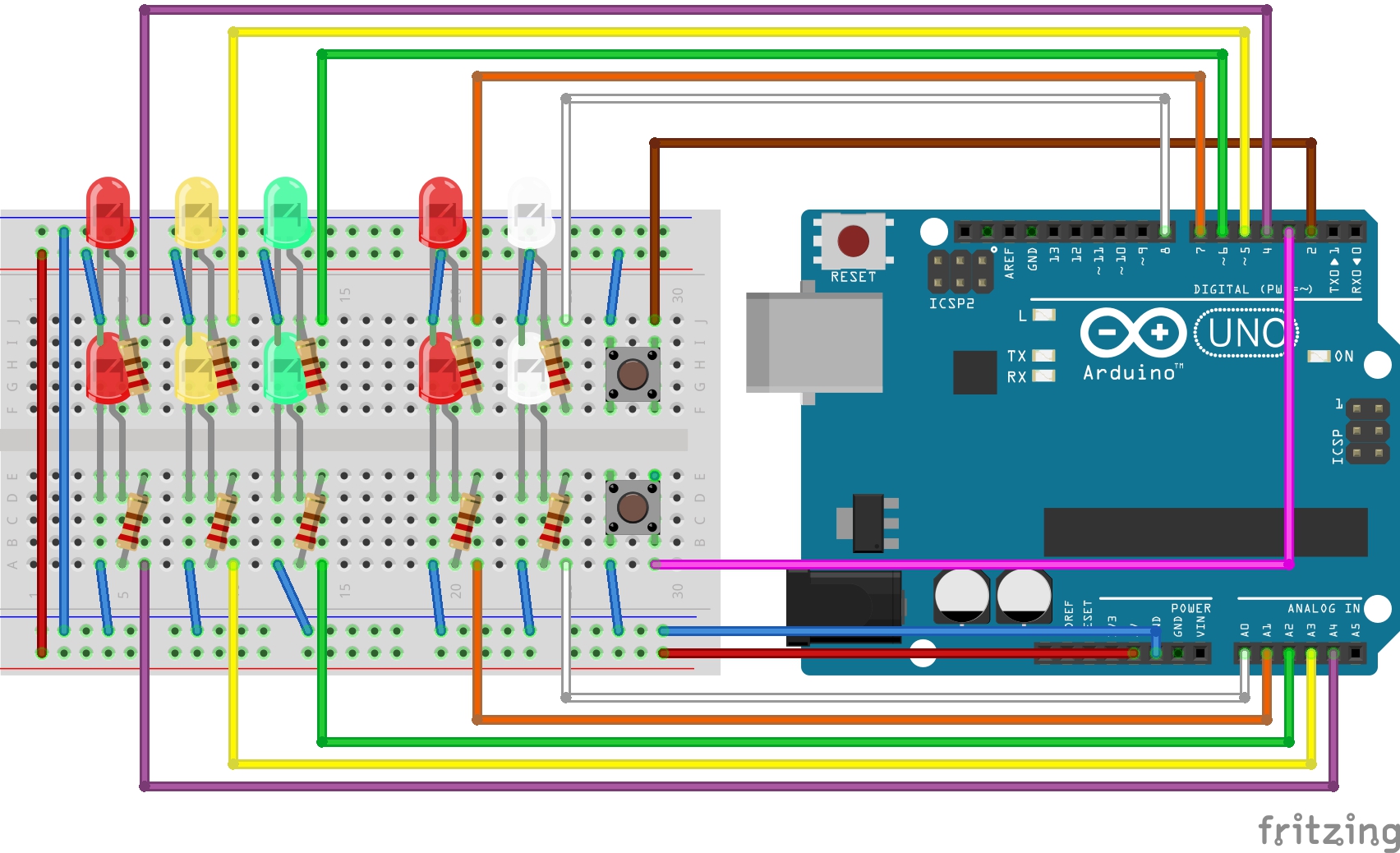