Waste segregation is essential for garbage to be recycled. This is a dangerous and costly task. This project aims to automate that process.

Waste segregation is essential for garbage to be recycled. This is a dangerous and costly task. This project aims to automate that process. 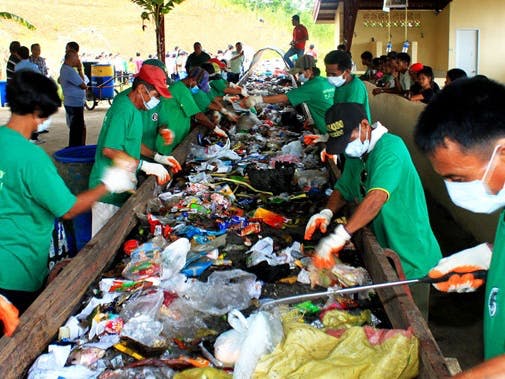 Motivation for this Project

Being able to sort trash according to different materials is very important for recycling. However, sorting trash is one of the toughest tasks to do. While it is easy to sort metals and non-metals, it is very difficult to sort paper, glass, plastic and cardboard.

For many countries segregating trash is a tedious and expensive task. This is why they simply refuse to do it and dump all wastes in to a single waste field. This has been shown to cause more ecological damage and also increases the time it takes for waste to decompose. If this process can be automated and made cheaper, then it can make it easy for countries to implement better waste disposal practices.

Currently, waste segregation is done by people. It is not a good job and workers are often at danger of being exposed to harmful chemicals, medical wastes and be exposed to diseases. If instead we can use a neural network that can do the classification then we can make the process faster, safer and more accurate.

This project attempts to use a convolutional neural network to do just that.

It is not always possible to run a machine learning model on a GPU as there can be cost and space restrictions. And always making an API call can have latencies and internet might not always be available.

In these cases using small, cheap devices at the edge (where the data is generated) is the best solution.

The problem with running models on the edge is that we are limited by the amount of computation power that we have. There are many ways to overcome this. You could use a hardware accelerator like a Neural Computer Stick. Or you could use some models that are built specifically to not be computationally expensive and run on the edge.

In this project we use the UP Embedded Vision Kit to run inference on the edge. We use the mobilenet model which is computationally less expensive.

The Neural Compute Stick (NCS) acts as a hardware accelerator that increases the speed of the neural network computation. As you may know, neural networks are computationally expensive and it takes a long time to load the model into memory and to perform predictions using it. The NCS converts the model into a NCS graph that is optimised for it and can load and run predictions very quickly. To

The connections needed to make this project is very easy.

If you are using the Raspberry Pi then connect the Pi Cam to it. You can connect the Neural Compute Stick if you have it, or not. The script script for performing prediction will work either way.

If you are using the UP Board kit, then please attach the Basler Camera to it. Since the UP board uses an Intel processor, it is comparatively fast and you do not need to use the NCS for performing predictions.

Set Up with the UP Kit

The data for this project was collected from the trashnet project.

The project can be found here. The project is structured in the following way:

Sample bash script for starting the training of the model

Sample code for performing classification with the saved model:

Note: This script is for running prediction using the UP embedded kit

For running predictions using the RPi you can use the following script:

This project requires python3.6 and opencv. Other requirements are present in the requirements.txt file.