In this project we want to make an automatic irrigation system with Arduino.

In this project we want to make an automatic irrigation system with Arduino. 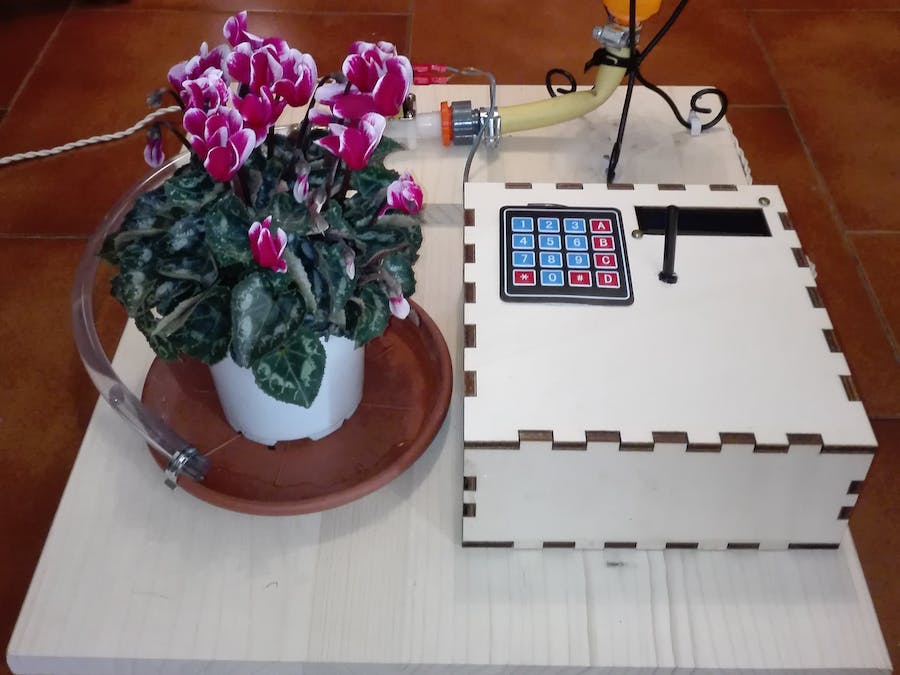 Have you ever wanted beautiful plants in your garden?

L’A.I.S, acronym for Arduino Irrigation System, can irrigate the plants in your home to a defined environmental condition, because you mustn’t irrigate them whenever you want.

When the environmental conditions are correct, and it's the correct hour, l’A.I.S will irrigate.

How We Made It

We made it in two distinct parts: the “brain”, that control the system, and the irrigation part, that irrigate the plants.

The brain was made with the school’s laser cutter and 6 mm plywood.

First, we thought about how we could make the tank for Arduino and the sensors. We decided to make it with a dovetail. After we drew it with AutoCAD Mechanical, we exported the file and we cut it.

We assembled it and we pasted with Vinavil, after that we made all the electric parts.

The irrigation part was made with a slab of laminated timber, cut with a copping saw.

First, we thought about the structure and we decided to screw the parts without any kind of glue. We increased the height of a part because the water needed to climb down from the tank to the plant’s vase.

We stick “the brain” on the structure and we tested it.

We used the temperature sensor because we want to restrict the ambient conditions that could damage the plant, like irrigation with elevated temperature.

If the temperature is over the limit that you chose, the system will not irrigate.

The DS3231 is a low-cost, highly accurate Real Time Clock which can maintain hours, minutes and seconds, as well as day, month and year information.

When the hours and the minutes are the same, you will choose when the system starts.

The LCD monitor allows you to know what system variable that you can change with the keypad.

The potentiometer is used to change the visibility of the LCD display.