Personal record of the project to achieve robotic arm recognition and tracking.

Personal record of the project to achieve robotic arm recognition and tracking. 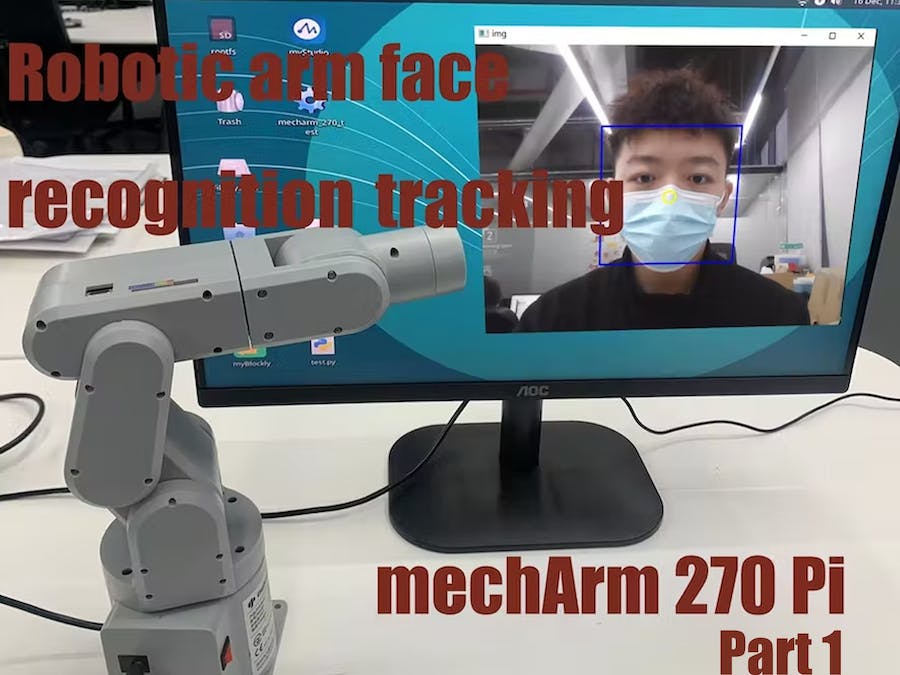 Hi guys, welcome to see the process of documenting the projects I have done.

Anyone who has seen Iron Man knows that Jarvis is a super-powerful artificial intelligence system.With the help of Jarvis, Tony Stark's efficiency in building equipment has been dramatically improved, especially with the recurring intelligent robotic arm. An idea came to my mind to achieve recognition and tracking functions on the robotic arm.

The equipment required for this project is in the table below.

This is a small six-axis robotic arm from Elephant Robotics with a Raspberry Pi 4B microprocessor and ESP32 as auxiliary control in a centrosymmetric structure (imitating an industrial structure).With a body weight of 1 kg, a load of 250 g, and a working radius of 270 mm, the mechArm 270-Pi is compact and portable, small but mighty, easy to operate, and can work safely with people.

Here are its specifications

mechArm is very informative and provides multiple python API interfaces that can be easily provided to me for use.The specifications for the interface at the end of it are available from the official website, and a suitable device can be designed using 3d printing technology.

Here are the specifications of the camera. It is mainly used for face recognition functions.

Introduction to the project

The flow of this project is shown in the diagram below. The main issue is to solve the face recognition function of OpenCV and whether to choose eye in hand or eye to hand for robotic arm calibration.

I will briefly describe these two functions do in the project.

The full name of OpenCV is Open Source Computer Vision Library, which is a cross-platform computer vision library. It is consisted of a collection of C functions and a handful of C++ classes while providing interfaces to languages such as Python, Ruby, MATLAB, and others. It implements many common algorithms for image processing and computer vision.

Face recognition means that the program discriminates whether a face is present in the input image and identifies the person corresponding to the image with the face. What we often refer to as face recognition generally consists of two parts: face detection and face recognition.

I use OpenCV because the OpenCV face recognition library is open source and supports the python interface, which can be called directly.

There are two ways.

The eye is outside the hand, which means that the camera is fixed to the outside of the robotic arm.

The eye in hand is where camera is fixed to the end of the robotic arm.

The position of the camera coordinate and tool system are relatively constant. Therefore, the relationship between the cam and tool coordinate systems is calibrated.

pymycobot is a library that controls mechArm in python and allows me to call the methods inside directly.

Let me test the results of the code

It is easy to use such a robotic arm like mechArm Pi with good manoeuvrability.

Next, let's see how to implement the face recognition.

Earlier I introduced the classifier and I drew a rough flowchart.

I have written the code based on the flowchart, let's execute the code to see the effect.

Honestly, the classifier trained by Opencv is very powerful! Very quickly the faces were recognised.

I completed the first two techniques in question.

One is the basic operation of the robotic arm and the other is the face recognition function.

When I was solving the problem of hand-eye calibration, I encountered difficulties in converting the coordinates in eye in hand and had no way to solve it in a short time.

This concludes this project of record. For several technical reasons, hand-eye calibration involves extensive knowledge and requires a great deal of searching and seeking help from various sources.