Braibox is a tangible control interface based on the use of Braille macro-cells, an accessory for the inclusive robot Kusibot.

Braibox is a tangible control interface based on the use of Braille macro-cells, an accessory for the inclusive robot Kusibot. 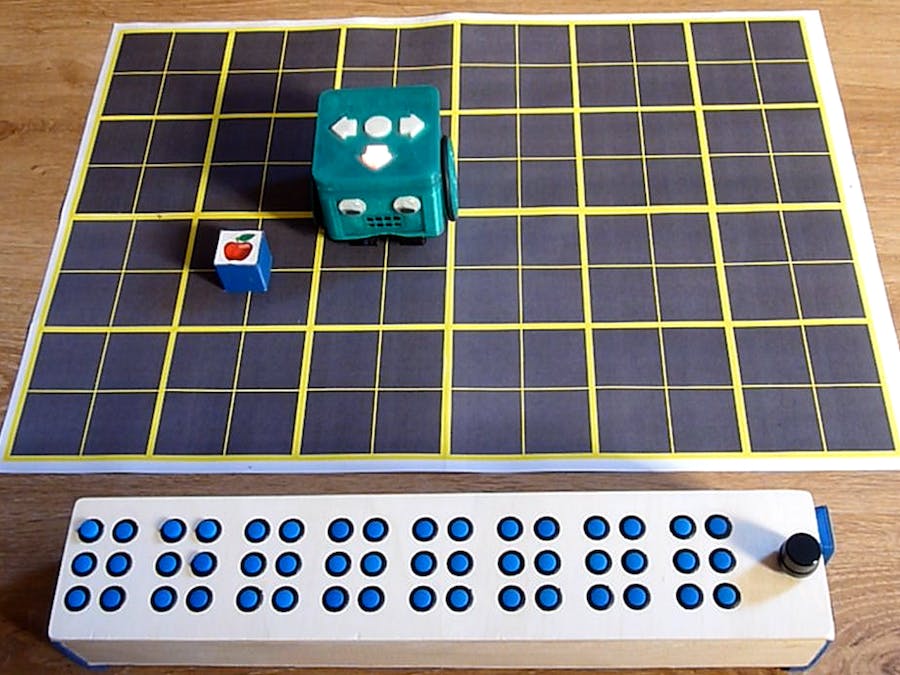 This is an experimental work to add to the Kusibot inclusive robotic platform, and make possible use the robot to visually impaired children, in a playful way to play with Braille. Braibox is a tangible control interface based on the use of braille macro-cells, which is larger than normal, big braille cell is used at an early age to introduce the blind child through games to practice reading.

The Braille input interface consists of 8 cells of 6 Braille points, using 60 switches with interlocking, that allow by touch to know if the button is raised or not. Due to the large number of connections necessary 8x6 = 48 pins to connect to Arduino and to be able to read the status of each of the switches, a port expander, matrix-type distribution and diodes are used, which reduces the necessary pins of Arduino, releasing the rest of pins for other uses.

Arduino reads the port expander using I2C bus, and if it detects that the large button has been pressed, it sends the commands represented by braille characters already encoded in ASCII using a bluetooth HC-05 module. The robot Kusibot receives the commands formed by the initials of the action to be performed (in Spanish language).

The first use I am giving is the control of a robot but you can implement different types of games in which you must enter braille text, and you can directly write to a tablet or pc using a Leonardo Arduino with the HID keyboard profile or connect directly by I2C pins to a Raspberry Pi.

3 projects • 35 followers
Creator of Kusibot & founder of Singular Devices , a project inspired for my passion for accessibility devices and robotics
ContactContact