The internet is full of tutorials on how to read digital and analog sensors, now it is time to do something useful with this data.

The internet is full of tutorials on how to read digital and analog sensors, now it is time to do something useful with this data. 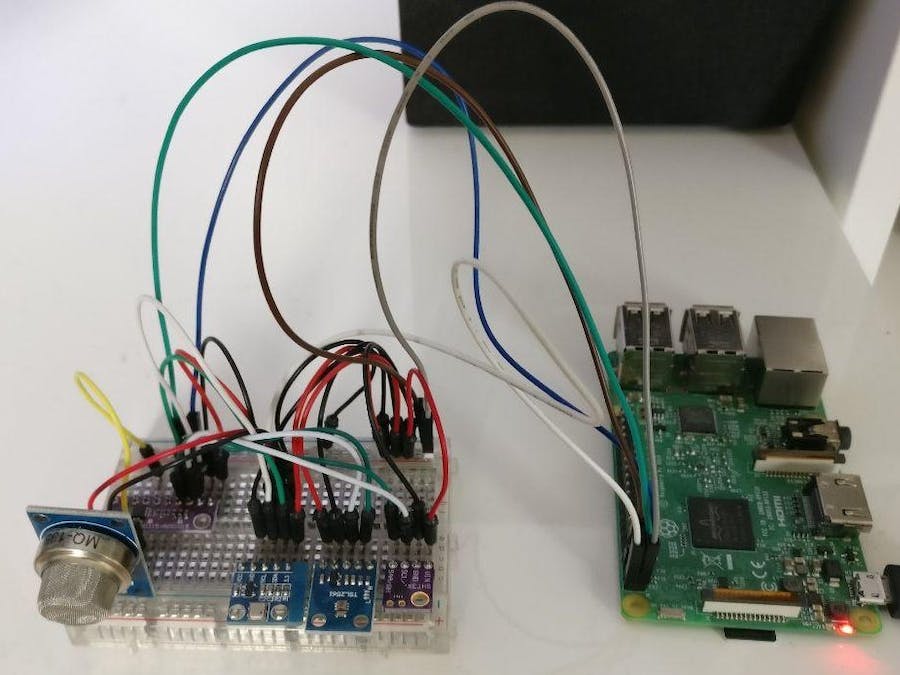 While working very concentrated on projects (like this one) it happens quite often to me that I forget about my environment. Suddenly sitting in the dark or not recognizing that fresh air is needed is not uncommon. Previously, I purchased a well known branded fancy Smart Sensing Weather Station, and I really loved how packed it was with sensors. I loved how much data they provided. But tinkering with it, I realized, I didn’t have local access to my personal data on a bloody device that is literally sitting next to me. The device only works with an internet connection, and all of my data is stored on their servers.

Having a sensor/device connected to the internet does not make it smart!

As a tinkerer I thought I can do that as well and maybe even better, get the same sensor data, add notifications and statistics to it all, but with the slight difference that my data and logic will be stored and processed locally.

So here’s what I did: I took my Raspberry Pi and attached sensors to it for temperature, humidity, air quality, ambient light and a barometric pressure. I decided to use nymea, my favorite IoT middle-ware, and wrote plug-ins for the sensors. Nymea provides a bunch of stuff out of the box, such as logging, statistics, notifications and rules, so that would easily allow me to add some actual smart behavior in my environment.

I used several I²C sensors, which I got from Amazon. I was looking for a I²C air quality sensors, but I wasn’t able to find any for a reasonable price, so I hooked a cheap analog air quality sensor to an Analog to Digital Converter (ADC for short). I used a Raspberry Pi 3B+, but a similar hardware platform, that supports the I²C interface would do just fine.

Since I²C is a parallel bus and each I²C device has a different default register address, there was no need to change the address and all devices can be connected directly. The air quality sensor has an analog output, therefore an ADC was needed. For this I used the ADS1115 ADC, also connected to the I²C bus allowing me to read the analog value as digital representation. There are still three free inputs, I'll probably extend the station with additional sensors in the future. I placed the temperature sensor as far away from the air quality sensor as possible, since the air quality sensor contains a heating element which gets hot.

Once connected, I checked with i2c-detect if all devices show up correctly according to the appropriate datasheets on the Raspberry Pi.

As a base operating system for my Raspberry Pi I used the latest Raspbian. After flashing the image to the micro SD card using etcher I went directly to the wiring and development.

The plug-in for the sensor station is not suitable for the main repository, since this is a DIY project, but you can get the source code from my github account and build it for your system:

In my setup I have the Philips Hue lights, the Kodi media center, an LG Smart Tv, the weather information from where I live and some other devices and services integrated. I also enabled the remote connection in order to have the push notification service on my phone (the data will remain locally, I only use the cloud connection to connect remotely and to receive push notifications). These are the devices I want to control, based on the data I get from my new sensor station.

And now it also contains my new sensor station!

Once the plugin development was done, I installed the plugin on my system and added the sensor station as a "thing" by using nymea:app as system client.

While developing the I²C sensor reading mechanism (starting a thread constantly to read the data in the loop) I realized that each sensor generates a lot of data, and has also some noise in the signal. To prevent a huge amount of data being dumped on the log database, rule engine and overall system performance I had to do some filtering. At the point of writing this article, the reading interval of the system is 5 minutes. This seems to be a good interval for reading slow changing sensors like temperature, humidity, and pressure. When it comes to quick changing sensor data, such as light intensity or air quality sensors, the system reacts slowly. For example: I switch on my lights, and in the worst case scenario, the system will recognize the light increase 5 minutes later. Not great. The current light measurement works perfect for the slow daylight changes, but it’s not the best in handling rapid changes. The problem is the huge noise in the data, which makes a classic low-/high-pass filtering or PID regulators useless, since you have to filter so strong, that you loose the quick responding effect.

Maybe a reader of this article has a solution for this problem? Is there a filter model/method for having smooth nice data changes on noisy signals, but quick response time on strong changes like switching on the light?

Interpretation of the data

In the app overview I see the current values of my station.

In the morning, when I start my day, I open my blinds and windows since my flat is isolated very well. The data from my new sensor station represents my “getting up” routine nicely, as you can see in the following diagrams (screenshots straight from the app). I opened my window at 8:30 in the morning for 20 minutes.

In the afternoon when it was getting darker outside I checked the sensor data again with following results (I have not opened a window, was alone here and my wife came home at ~16:30 from work).

After getting a good feeling about the sensor values it was time to define some rules and actions depending on those data. For my "problem" I defined two rules.

The first rule which I called Air quality notification should inform me if the air quality is bad, so I can open a window and my mind remains fresh and awake. According to the data gathered during the day I realized, that a ppm value above 2000 ppm is where I can sense that fresh air is needed (coming back into the room after a walk). If this value would represent only CO2, I would probably be dead with 2000 ppm, but the sensor is detecting multiple gases, so there's a lot of space for interpretation. For a precise measurement I definitely would choose another sensor, but for my needs, it does the job.

The rule sends a notification to my phone and to my media center, once the value goes above 2000 ppm.

The second rule which I called Light sensor rule should switch on my couch background lights, but only if the TV is currently on. I could do this in 2 ways, either check if Kodi is currently playing (I watch TV using Kodi PVR plugin for Mythtv) or using the Smart TV plugin by detecting if the TV is reachable. Both cases would do the job for me. I could also use the presence sensor plugin, which checks the presence of a network device in the LAN. If my phone or the phone of my wife is in the network, switch on the light, if the light intensity goes below 80 lux.

Light sensor rule under the condition that the TV is reachable

It works! After using the indoor sensor station for more than 2 weeks now I am aware that I'm opening the window more often, and I was never suddenly sitting in the dark since I use it. To me, it was surprising which daily actions of mine I recognized in the sensor data. Since the data is stored locally and mine, I have no bad feelings regarding the data gathered. The functionality (besides the phone notification) does not depend on my internet connectivity.

There are several things I want to do with my new sensor station. A few ideas: 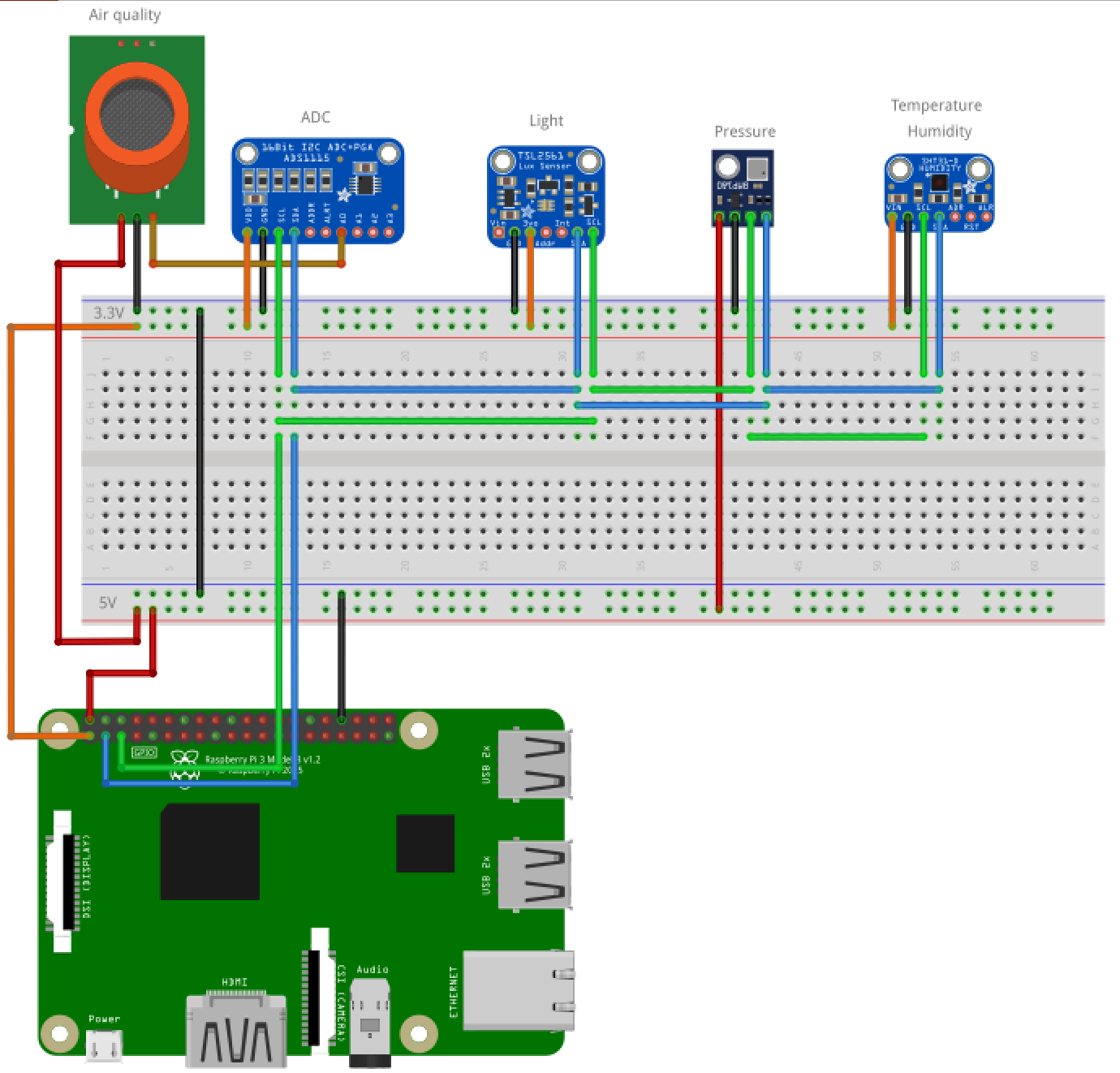