A pedal board to send MIDI Program Change to my old guitar multieffect that has a MIDI IN port.

A pedal board to send MIDI Program Change to my old guitar multieffect that has a MIDI IN port. 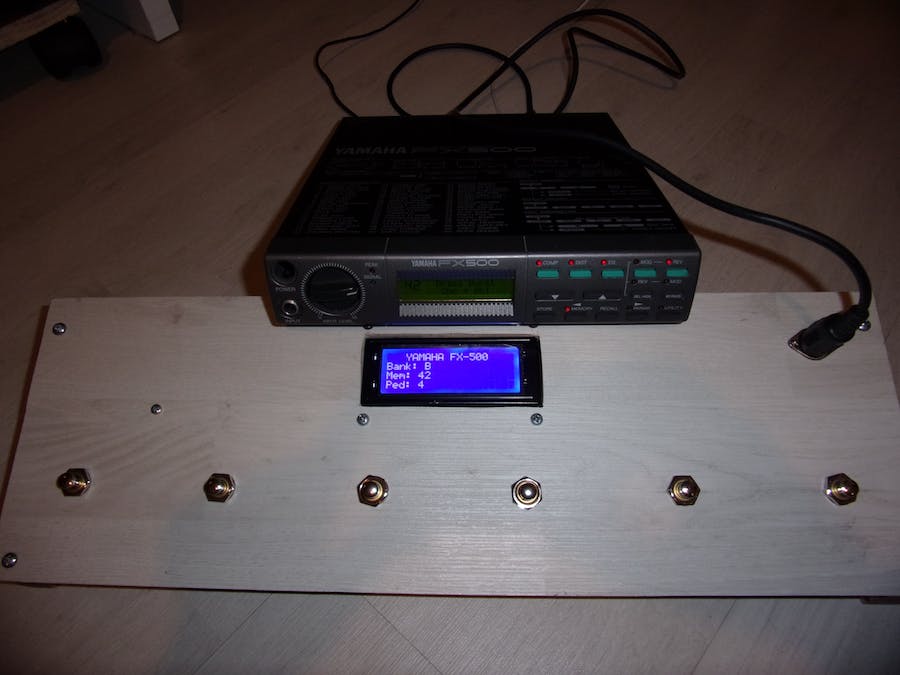 I have an old guitar multieffect Yamaha FX-500.

To change the presets (90 in total), I must press up/down buttons and confirm it with another one. It is not useful while playing guitar.

So I decided to create a pedalboard to change the presets quickly.

In the back of the multieffect there is a MIDI IN port that can receive MIDI instructions (or for connecting the original pedalboard).

So, using an Arduino Micro and the MIDI.h library I create the prototype.

I want a 5x2 memory slot. Each single pedal button can memorize two preset. There is a sixth pedal button (called Bank A/B) that is used to switch between the two presets associated to each button.

At first I create a prototype with two buttons (one pedal and the bank A/B), to test the first code version and the MIDI messages.

The second step is to create the elettric diagram with the six buttons and how to place the components on the board. I decide to use the screw connectors for pedals, LCD and MIDI port, so I can leave an open door when I'll decide how create the case.

After this I start soldering all the components and the wires.

Pay attention to the welds so as not to create false contacts (I had some).

I have connected all the buttons, LCD, midi port wires and I have used an old box to test it.

It works fine, but it needs a beteer case for a real use! (done! go ahead)

Button 1 to 5 from the left, button bank A/B on the right

I think that the Arduino code could be optimized, contributes are welcome!

Ok. I have built the pedal board.

And this is the result:

pedal board with FX-500
Rear

I've modified the software because I want to use the pedal board with three different guitars.

Now I have ten (2x5) banks of memory for each guitar.

Pressing for a while button one and six simultaneously, it is possible to change the guitar.

With button six (on the right) you can switch between bank A and B.

If you press button six, the pedal board doesn't switch to a new memory immediatly, but it waits that you press a button. In this state the display shows the new bank and the message "ARMED". When a button is pressed the memory change and the message changes in "in use".

I think that the project is completed. 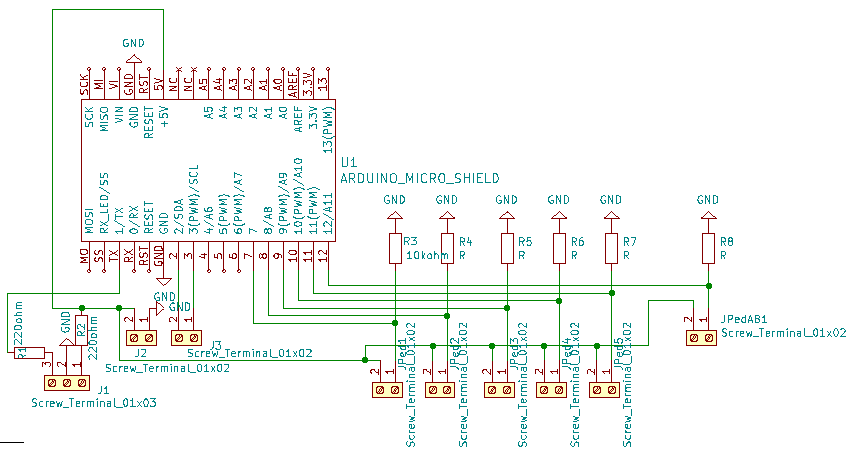