Install Ubuntu 18.04.4 LTS on your Raspberry Pi board

Install Ubuntu 18.04.4 LTS on your Raspberry Pi board 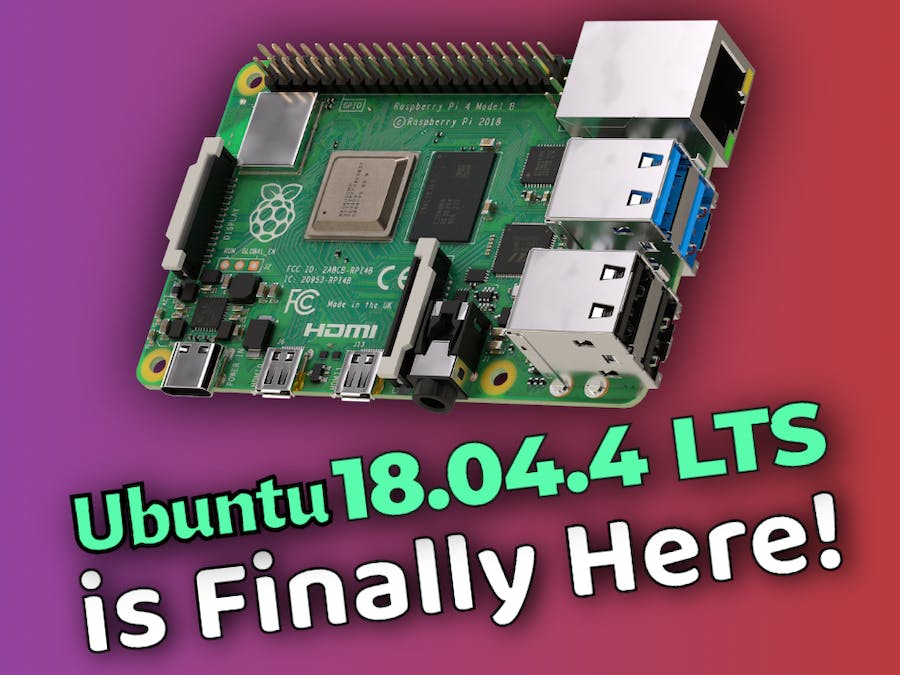 As we know, Raspbian is based on Debian distro, which is the official operating system for the Raspberry Pi. It is lightweight and remains a top choice, and one of the most popular Raspberry Pi Linux distros. However, there are plenty of additional Raspberry Pi desktop options.

Installing Raspbian is easy as well but the problem with Debian is its slow upgrade cycles and older packages.

Running Ubuntu on the Raspberry Pi gives you a richer experience and up to date software. Also, if you work with ROS (Robot Operating System), you know that the main supported OS is Ubuntu.

We have two options when it comes to running Ubuntu on your Raspbian Pi.

The first option is the easiest and the quickest to set up while the second option gives you the freedom to install the desktop environment of your choice.

In December 2019, Canonical published a support roadmap for the latest Raspberry Pi 4 single-board computer on their Ubuntu Server operating system and pledged to fully support Ubuntu on all Raspberry Pi boards.

In this tutorial I will show you how to install Ubuntu 18.04.4 on a Raspberry Pi 4 B board.

You can flash Ubuntu image on your microSD card very easily on Windows, Linux and macOS operating system using Etcher. Etcher is a really easy to use software for flashing microSD cards for Raspberry Pi devices. You can download Etcher from the official website of Etcher.

Launch Etcher and select the image file and your SD card.

The process will take a few minutes, so be patient. When Etcher is done, you can remove your card from the computer.

Step 3: Setting Up the Raspberry Pi

You probably already know that you need a few things to get started with Raspberry Pi such as a mouse, keyboard, HDMI cable etc. You can also install Raspberry Pi headlessly without keyboard and mouse but this tutorial is not about that.

When everything else is set up, power it on your Raspberry Pi by plugging the power cable.

After powering on your Raspberry Pi, wait for the boot process to complete and you should see the following message on window.

Login with the default user. The default credentials are:

After changing the default password, you should be greeted by a message confirming that you’re now on Bionic Beaver:

To be able to setup Wifi on Raspberry Pi, you first need to get the name of the wifi card by showing physical components using the following command:

In my case it was wlan0. Then navigate to /etc/netplan/ using the cd command

Add your WiFi access information. Make sure not to use tab for space, use the spacebar to create the blank.

Change the SSID-NAME and the YOUR-NETWORK-PASSWORD with your information. Close and save the file using ctrl+x and press yes.

Now, check whether there’s any error in the configuration file with the following command:

If any error encounters then you can check with this command for detailed error information.

Apply the configuration file with the following command:

Step 6: Updating and upgrading Linux software on your Pi

To make sure all dependencies are up to date, run the following command

If you want to get the latest versions of software you installed already, run

This command upgrades all the software on your Pi to the latest version. It can take a while to run, so you don’t need to do it often. You have to press Y and Enter to confirm.

Step 7: Install the Desktop Components (GUI) on an Ubuntu Server

Ubuntu server is designed to use minimal resources. A GUI will lead to high resource usage, however if you still want a GUI, you can install only what's required. Sometimes you need the GUI on your Ubuntu server to handle simple day-to-day tasks that need quick interaction without going deep into the server settings. You also do have the option of installing a desktop environment. Install the default Unity desktop environment with the following command:

To install the Unity desktop environment without addons like (Email, OpenOffice):

and you are done. Congratulations. You successfully installed Ubuntu desktop on Ubuntu Linux server.

Ubuntu 18.04.4 for Raspberry Pi is a great general-purpose OS with a full desktop environment and a large community filled with resources. It also comes with the added bonus of being available in a 64-bit version to use the Pi to its full potential.

You’re officially ready to use Ubuntu on your Raspberry Pi. Keep an eye on the developer’s website for future builds.

46 projects • 79 followers
I am a hardcore robotics and IoT enthusiast. A Research Assistant at Nazarbayev University. Email: shakhizat.nurgaliyev@nu.edu.kz
ContactContact