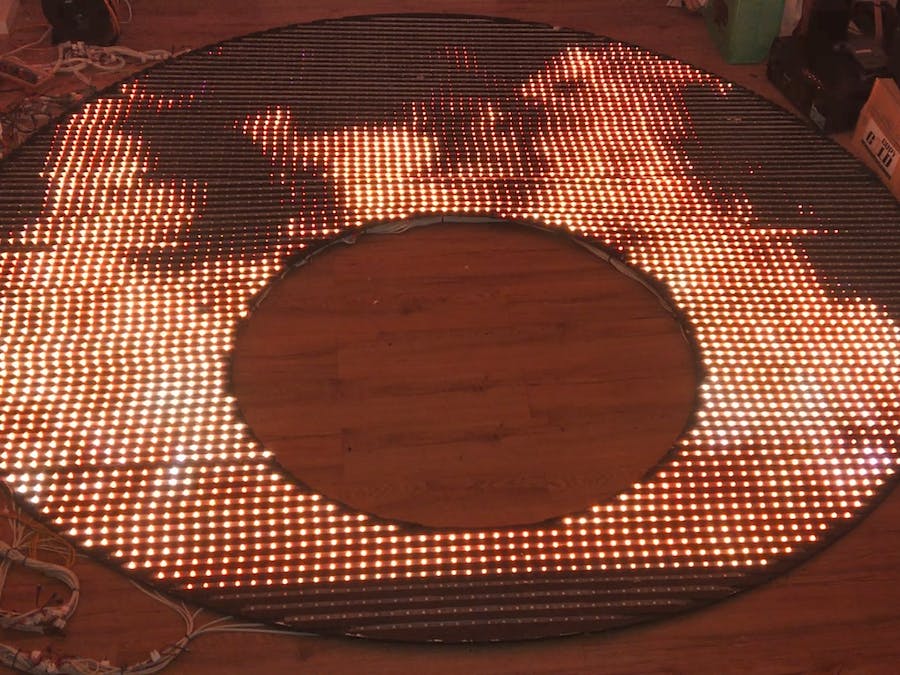 This project consists of a ceiling mount consisting of 4,661 NeoPixel LEDs powered by a multiple 5V power supply, 10 Fadecandy NeoPixel driver boards and a Raspberry Pi 3 Model B+. This LED ceiling mount is capable of playing videos, and displaying colors as selected on the color picker. A web-based mobile application is developed, so that the users can select the videos or the color, that is to be displayed in the ceiling mount display. The data is sent from the users browser to the the LED ceiling mount over WiFi to the Raspberry pi hosting ROSWWW server. We’ve used ROS framework on this project, to manage multiple nodes and establish communication between Raspberry Pi and the web application.

Our project included a polywood frame, in a circular shape with a hollow circle close to the bottom of the frame. The frame was designed in such a way it fits into the Plaster of Paris layer on the ceiling. The fitting is done using large mounting screws directly into the concrete layer.

We used flexible NeoPixel strips of 30 LEDs/m. Since, the shape of the frame is circular, placing a whole strip of LED is not a feasible option. We applied some simple mathematical formula to generate a file that would help us determine the amount of LED required in each strip cut.

To find the solution to these problems, it is important to understand the layout of the frame (fig 1).

Consider a graph of 85x85, the centre of circle lies on the grid (0, 42.5). To fit the LED in circular pattern of the frame, we have to add and remove LED at certain edges, this is the first challenge we faced.

To solve this problem. We designed a text file using python. This text file consisted of (x, y) coordinates, that helped in placement of LEDs. To map the LED for video playing and color picking purpose, we used the same text file to generate tuples using (x, y) coordinates and store those value in a pickle file.

The starting point of LED strip varied at different places in our project, because of its unique design. So, we generated a file as tagging system, for us to keep to track of the points at which we will pull power line and data line for the LED.

The File Will Be Attached Below….

Since, we were using 4,661 LEDs in this project. Powering them up was particularly a challenging aspect. There are chances of LED deteriorating during power fluctuations, low voltage, hence we had to be careful and take precautions while powering the LEDs. We used 5, 5V 60A power supplies. Our goal, was to have around 950 LEDs supported by each power supply. The more information about this will be given in brief at power topology section.

In our project, we connected 10 Fadecandy drivers to the Raspberry PI 3 B+, using 2 multi TT USB. Each Multi-TT can support upto 4 Fadecandy drivers, and the other 2 Fadecandy drivers were directly connected to Raspberry PI. Turbo - 4 Port USB Hub is specially designed for high efficient connectivity between multiple devices. It uses mtt (multiple transaction translator technology) which guarantees 12 mbps speed for each port. This enables all 4 devices to operate at 100% efficiency simultaneously. It is vital for Fadecandy to have transfer 12mbps in each port, since we are playing videos in Fadecandy,, high transfer rate was important for us.

In the Raspberry PI we used ROS framework’s ROSWWWW to host the server in local network. We created a responsive HTML page, to give it a mobile web application UX. We used ROSJS library in the webpage to communicate to the ROS server in the Raspberry Pi. Since, ROSJS is capable of sending message through socket protocol. We used this to our advantage to send messages from the Webpage (Browser) to Raspberry pi. Based on the socket messages sent, raspberry pi sends Fadecandy instruction to perform. The snippets of the codes used to perform Fadecandy operations will be explained below.

We also created a common ground to connect the grounds of Fadecandy and power supply.

The above diagram, accurately show how the power lines, Fadecandy data lines, and ground are connected to each other. 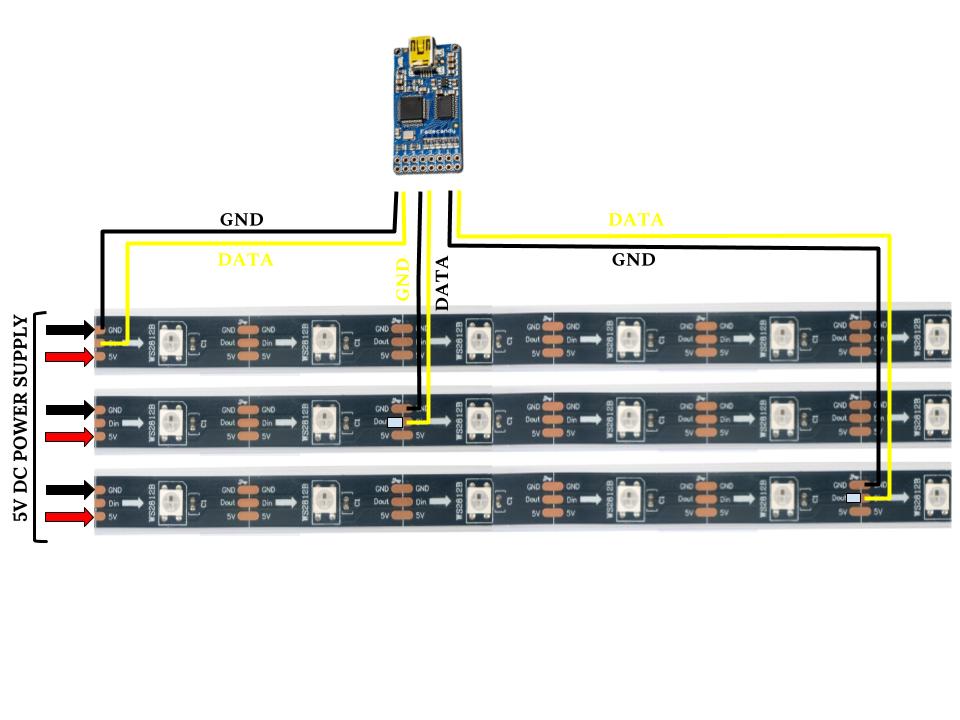 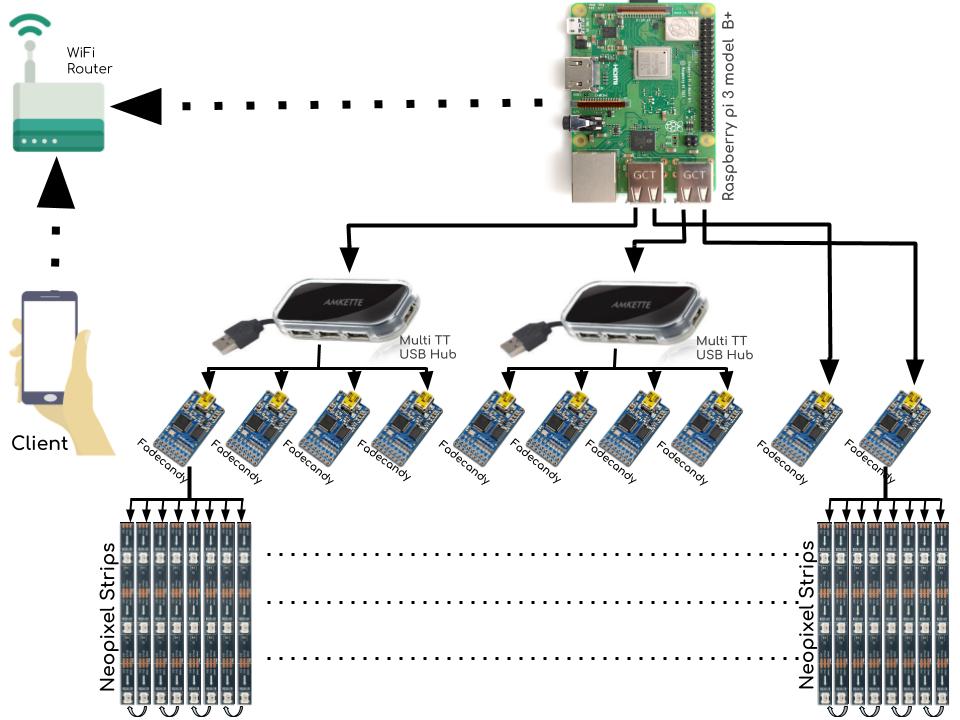 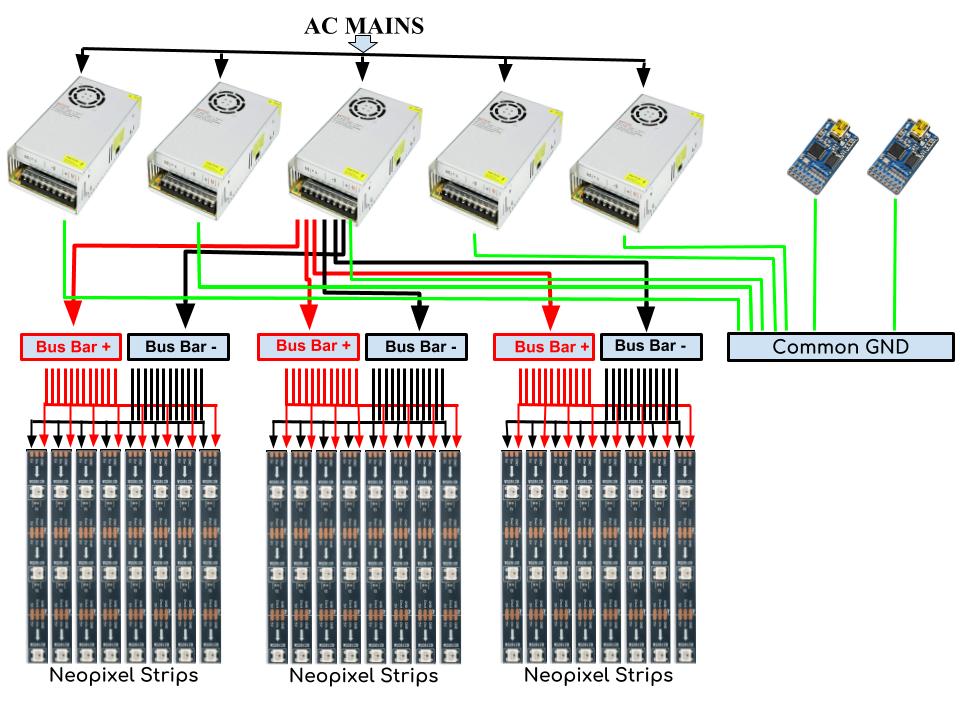 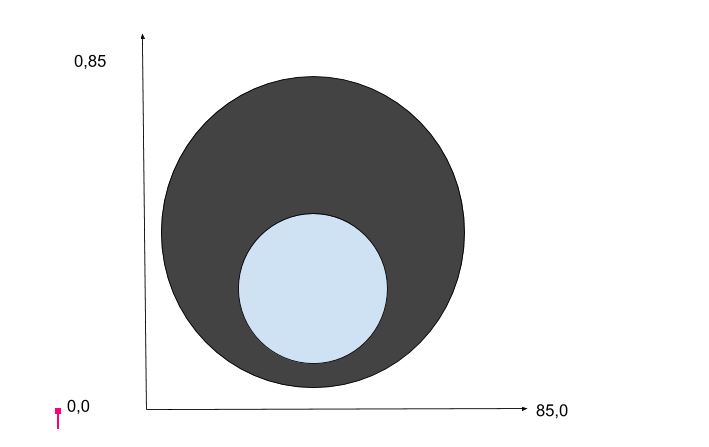