This is a GPS enabled audio player for a friend's new hilarious project where comedy meets tourism. This is a fake walkie-talkie.

This is a GPS enabled audio player for a friend's new hilarious project where comedy meets tourism. This is a fake walkie-talkie. 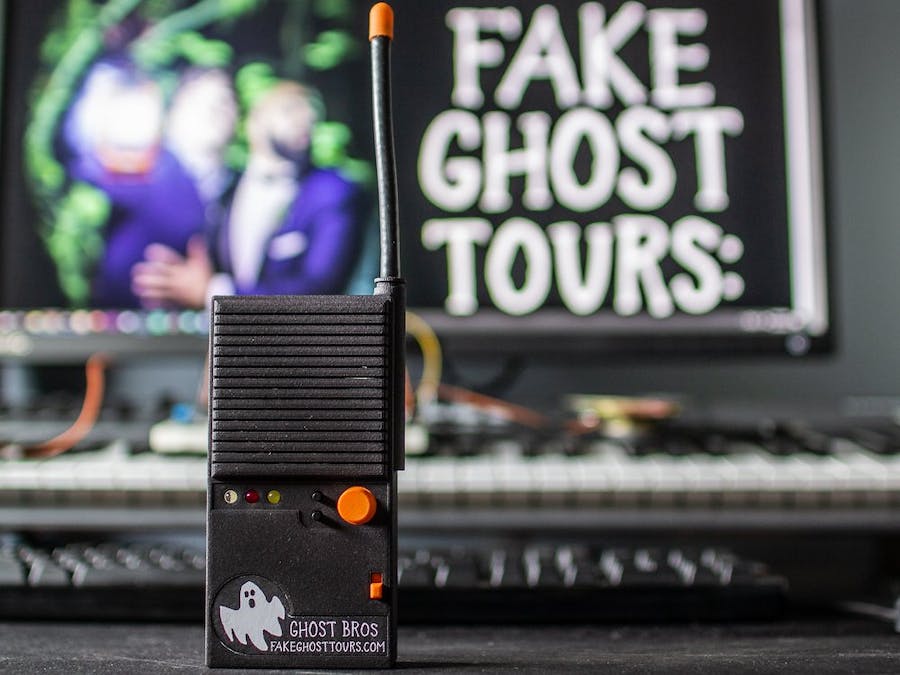 Sometimes its really easy to recognize a good idea because you feel so inclined to just be a part of it. This is the reason the "fake" walkie-talkie exists. Not because it was a super great idea, but because its in collaboration of a much better one. My best friend (literally) lives on the other side of the country from me, about 3000km away, so we rarely get to work on projects together. We're both creative people and have a ton of ideas and things to work on, but it can be difficult to collaborate or assist each other because of the distance. So, when I learned about their new project, the "Ghost Bros" (fakeghosttours.com), I thought it was really creative, and I had to be a part of it, at least in some way, even its just a small, unnecessary part.

This project was designed to be a prop for the new Fake Ghost Tours that my friends have created. The Fake Ghost Tours are basically a comedy skit that meets tourism. The tour itself can be done solely on a phone (and eventually an app), but the idea of a real tangible object that can be used for the tour was too good to pass up, and I knew I could make it. But I only had two weeks.

I started to slam together a design. I first discovered a picture of these 80s Ghostbusters walkie-talkies and I figured it would be the perfect design; very nostalgic, classic, fun, easily recognizable. The design was quickly put together and sent off to Shapeways(Body and the Accessories).

Once I had the general shape done, I had to figure out how I was going to get GPS to play some audio files in specific locations. I always have a pretty good idea of what I'm going to do before I agree to make something, and I have used GPS before in other projects so that was no issue, but I haven't really done any audio stuff. I wasn't too worried, there are lots of resources online on what components to use, what works, and what is available. I can do it. Two weeks? No problem.

A great place to reference designs from is Adafruit. They are very reliable to use without too much information missing; plus its easy to get their components delivered next day. It also gives me an excuse to buy new toys. I knew I was going to have to design a circuit board, and while waiting for them to come in the mail, work on the firmware, it was the only way I was going to get it done in time for their launch of the tour. I ordered a few Adafruit boards: feather MP3 player(VS1053), Feather GPS, a Feather M0, some speakers, a separate Mono amp(PAM8302A), a bunch of other stuff to test and started working with those designs.

Generally, I don't like to rush work, it normally causes more mistakes than spare time. In this case, I didn't have a choice. I got the schematic all laid out, taking reference from the Adafruit boards I would be testing soon(they had not arrived yet at this point). This is risky since I like to test the pin-outs I would be using before actually sending them off for fab, you never know! Luckily I used my HCC Module, which simplifies things a lot and saves a lot of design time and components(self plug!).

The design was done, but I couldn't order it yet. I have this thing about ordering a single project from overseas, that thing is, I don't do it. Having the layout done was a bit of a relief though. That way when the Adafruit parts arrive, I could just make small modifications. I was definitely testing my luck with all of the new audio circuits I have never tried before. Once I had a few more boards ready to order I did some last minute checks to the walkie-talkie board, and away they went! Off to my go-to fab house, PCBWay.

The boards arrived with a few days to spare which is always good. Working on a board on the day it needs to be done is never fun(and I've done it a few times). There really wasn't much time to have any issues or debugging, it just had to work. So I plugged it in and...!

It worked, uneventful! Everything worked. The audio worked, the speaker, amp, GPS, SD card, the speaker even turns off when you plug the headphones in(this is trivial but it really makes it seem like a real product!). The audio required the batteries to be installed, it won't play over USB. Once I tested everything it was time to do some real tests to the firmware and figure out the bugs. Its not a super critical program, just needs to, at most, work.

The program is designed so that you can input 11(or however many you need) GPS coordinates. These are your center points. When the person holding the fake walkie-talkie get within a certain distance of these points, the walkie-talkie allows a specific audio file to be played. You place these audio files on the SD card and label them accordingly. The are only accessible when they are in that location. The effect of the audio files is really great. It really feel like these two geeky ghost hunters are talking into the other end of an 80s walkie-talkie. I was surprised at how cool it was. There are also some other tricks that can be included(and might be if I have time) like random talking when you're in between points, and menus and such. You can, of course, put your own locations and audio files and design your own things. That is the fun of open source hardware, change what you want!

I assembled the remaining parts, threw in some batteries, added the other 3D printed parts and it was done! Time to take it outside.

I set a location near by that wasn't able to be triggered from my office, but not so far that I had to venture out into the real world (scary). As I approached the radius around the location the red LED flicked on and gave an audible BEEP! This lets you know you have a new file you can play. Having just the basic function means that this project is pretty much done - its not overly complicated. I had a lot of other things on my plate but when your friend needs to you do something, you find time. This was a really fun project and I hope it turns into something real, I think something may be in the works.

I'm really excited for the Fake Ghost Tours. I know its going to be a fun, hilarious adventure. Unfortunately I live so far away(Ontario vs. BC) I won't be able to go on the actual Tour. Luckily you don't actually need to be there to enjoy it. If you go to FakeGhostTours.com, you can easily download the files into your favourite podcast app. As fun as it would be to be on the actual streets listening to these guys, its just as good to listen to on its own. I recommend it.

If you feel like building your own Fake Walkie-Talkie, whether it be for the actual Fake Ghost Tours, just like the idea of GPS enabled audio player, or even just want to make a cool looking MP3 player. I have the resources available throughout the story. If anything is missing let me know. If you want the awesome "80s walkie-talkie" look that I have designed, I have provided a Shapeways link to the parts.

If you enjoy my open source projects, I would love it if you would subscribe to my YouTube channel. I'm sure there are plenty of other projects you will enjoy. Lastly, if you want to become a contributor to these project(so I can make even more!), consider becoming a patron on Patreon: http://patreon.com/seanhodgins. My patrons help me purchase components, 3D prints, tools, all of the things needed to make these possible. I can't thank them enough.

One last thing, if you're an individual or a company that has an idea for something that you would like built, but have no idea where to start. Please feel free to contact me. I can provide both consultation on projects, or even design and build a real prototype. Visit my website www.idlehandsdev.com for more info.