A hot air popcorn popper triggered via the Internet! (Built for the Bellingham Codes May event.)

A hot air popcorn popper triggered via the Internet! (Built for the Bellingham Codes May event.) 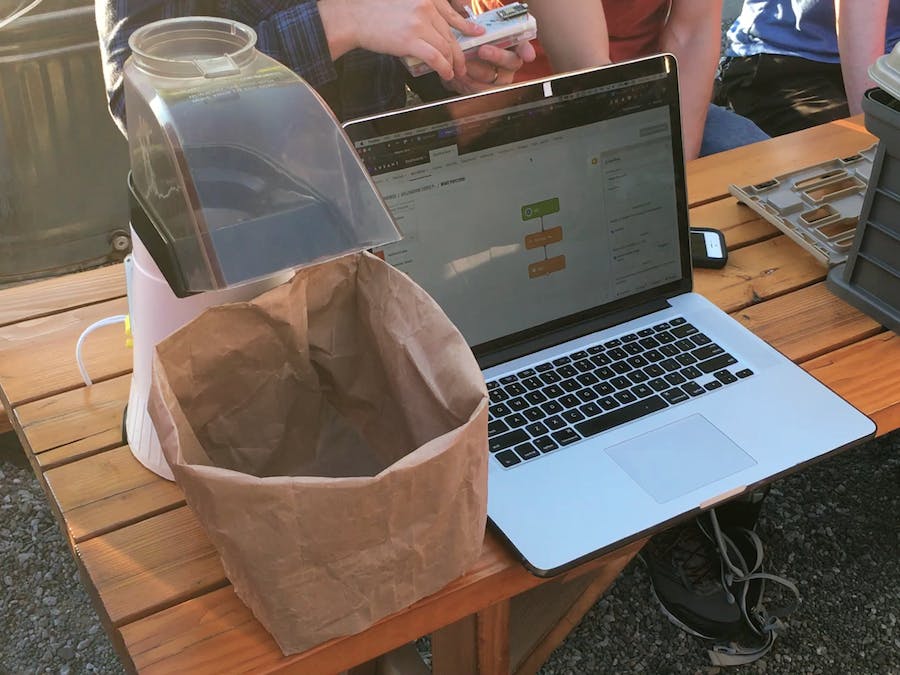 I co-organize Bellingham.Codes, a monthly meetup of software and hardware developers in Bellingham, WA. For our May 2017 event, we partnered with Particle to run a workshop around Photon devices and an earlier version of their excellent Relay Shield.

At my house every Friday night, my family and I make finger-friendly food (usually pancakes or pizza) and throw on a movie. It seemed only natural that I would wind up on a popcorn kick as a result, making my own stove-top popcorn from scratch. Since I knew we would have access to high-powered relays, I decided to rig up a hot air popcorn popper.

Serendipitously, a local church had a huge rummage sale were I bought not one, but _two_ hot air poppers. After a quick head-to-head test, the larger—and more powerful—Poplite popper earned the role of primary popper. (The other popper would later be sacrificed for its motor.)

Growing up in rural Pennsylvania, a certain "old man" (as he asked to be called) really wanted me to develop skills in electronics; try as I might, those skills never materialized. Though the hard parts of circuit design and fabrication were done, I decided to call that old man up and work with him on dissecting the popcorn popper and planning out the integration.

After much puzzling and scratching of chins adorned and unadorned with facial hair, we decided the internal mechanisms were too risky to mess with. Instead, we decided it was best to hook into the main power cable.

Wiring up the popper

To replicate this yourself (and this works for more than just popcorn poppers!):

Now that your device is built, you'll need to program it. Assuming you use the same version of relay shield, the attached code will work. If you are using the latest (version 3), you should use their RelayShield library instead. To set this up for your device:

If you look closely at the code, you'll notice there is a "cloud function" called make_popcorn . This is the function we want to call to, well, make popcorn.

Making popcorn with a WYSIWYG

When I planned the event for Bellingham Codes and Particle, I surveyed the attendees to get an idea of how comfortable everyone would be with hardware and with programming. Since some of the attendees weren't software developers, I decided to show off how you could get this device working using nothing but web tools. To trigger this Photon function, then, I chose Losant.

Here's how to configure Losant for yourself:

1. One way or the other, create an Application in Losant.

2. In that Application, create a Workflow. [If you're using Losant Go, the Application and Workflow may already exist.]

3. Edit the workflow, adding at least one Trigger and one HTTP Output.

4. We need two pieces of information from the Particle Web IDE:

5. Back in Losant, edit the settings for the HTTP Output you created:

At this point, you're ready to test everything! Once you trigger your Losant workflow, it will make an HTTP POST request to the Particle Cloud API, which will call that make_popcorn function on your Photon, starting the hot air popper.

What about that motor?

Good question. I went back to the "old man", and we talked at length about how to automatically reload the popcorn. I built a couple of prototypes, and it proved to be a much harder problem than I anticipated. Nevertheless, I built a basic version of what I think is the best design: using an auger.

Unfortunately, the first version didn't work at all. The motor was way too powerful without gearing it down, I could not get it to work with the Photon's PWM capabilities to otherwise slow it down, and I ran out of both time and ideas. This is what that auger looked like after a day of testing (and videotaping for hilarious posterity):

Though my attempts at automatically reloading may have been foiled, controlling the popper itself with a Photon was still a delicious, delicious success.

Thanks again to Particle for being awesome and sponsoring our event. We had a great time, and the Bellingham folks learned a lot. [One of the attendees was a 12-year-old, and he made an IKEA lamp blink S-O-S. It was awesome.] Stay tuned for more ridiculous devices from our labs.