Vision: A Torch For The Visually Impaired

Vision: A Torch For The Visually Impaired 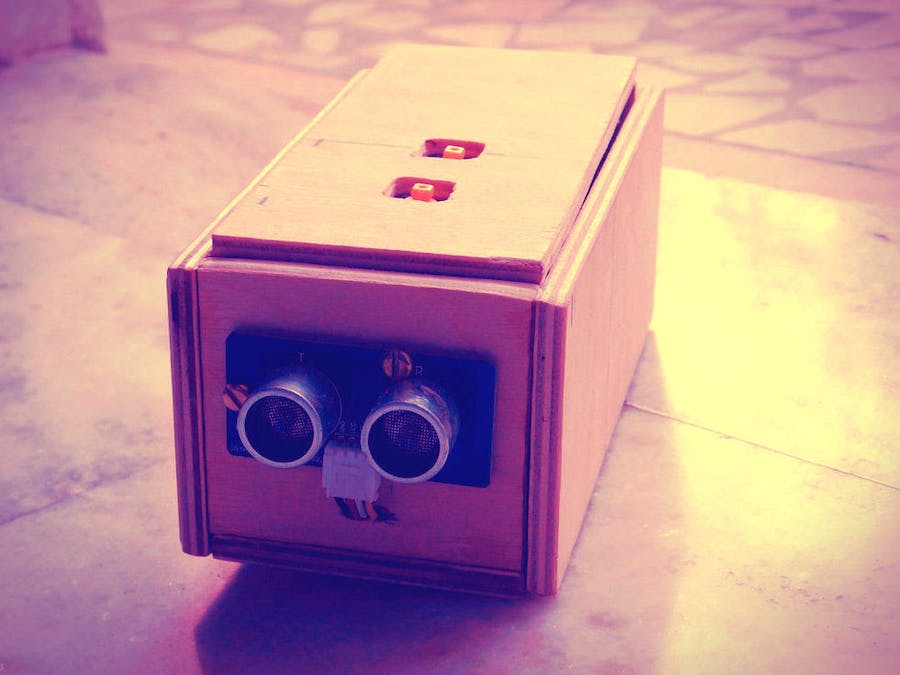 Vision is a torch shaped device to help blind people navigate with greater comfort, speed and confidence, whilst making use of ultrasonic waves to detect nearby obstacles and to notify the user through vibrations and beeps of a buzzer. The idea was inspired from bats, who also use sound waves of high frequency to move.According to an estimate, there are 285 million visually impaired people in the world. The loss of one the most important human senses causes them a lot of hardships in daily life. The affected ones have been using the traditional white cane since many years which although being effective, still has a lot of disadvantages. Another way has been a pet animal such as a dog which is not very common for being comparatively expensive. So the aim of this project is to develop a cheap, yet more efficient way to help the visually impaired navigate with more speed and confidence. As seen in the picture, the device is lightweight and handy with the fact that it does not emit light. Instead, it uses ultrasonic waves to detect obstacles and notify the user through vibrations and sound beeps. This overcomes the problem of not being very flexible as in the case of white cane.

Practically talking, this device will help the blind to navigate without holding a stick which is a bit annoying for them. When used on a large scale, with improvements in the prototype, it will drastically benefit the community.

Here's a video of the project in action. Sorry for the bad quality, it was made in a hurry..

I would love to have questions/suggestions for this project. Post them in the comment section below or leave a message at agrawalsanyam946@gmail.com

What is a White Cane?It is basically a stick made of certain material used by people who are visually impaired as a mobility tool. The trick is to touch the stick at various objects around you and sense them to detect your path. It was first introduced about 100 years ago and since then, it has been the most common way for navigation by the visually impaired. So they are sub-divided into 3 basic types:

Problems Faced By The Visually Impaired (With The White Cane):As described by Cristina Hartman on a question asked on Quora.com: What is it like to be blind?"As simple as the white cane may be, it still requires training. There are different holds, arcs and contacts. You hold and move it different ways depending on how many people are around you, familiarity of the area; among other factors. The white cane gives you a lot of information, but there are a few things that get me: Chairs and Tables (my cane simply slips underneath), overhanging brush (again, my cane isn't high enough), and cracks (sometimes my cane will bounce back, which is annoying)." Common Disadvantages of White Cane:

According to WHO, 285 million people are estimated to be visually impaired worldwide, out of which: 39 million are completely blind while 246 million have low vision.15 million people out of the total are from India alone. 75% cases were of avoidable blindness, the major cause being Poverty, Illiteracy, and lack of medical facilities in villages. Out of the major daily activities, walking becomes the most difficult task. So for the past few months, I have been trying to make a much effective technique to beat the wooden stick. Question: Is it possible to invent a simple device, much smaller than the white cane to help the visually impaired move with greater confidence and speed? Is is possible to make that device as small as to be held by one’s hand? Aim:

Step 3: The Concept Of SONAR / Use Of Ultrasonic Sensors

SONAR (Sound Navigation and Ranging) is a technique that uses sound propagation to navigate, communicate with or detect objects. Ultrasonic sounds (frequency > 20Khz) when emitted from a transmitter on hitting an object, get reflected and are detected by the receiver. The time interval between sending and receiving the waves is counted and thus, the distance of obstacle can be calculated. Ping ultrasonic sensors are the most widely used distance sensors by hobbyists, being relatively cheap and accurate as compared to other sensor types. They work on the principle of SONAR. As seen in the picture, it has two drum shaped objects, one of them is the transmitter while the other one is the receiver. It has a maximum detecting range of 450-500cm, thus will easily serve the purpose of this project. Why Ultrasonic Sensors?

Why NOT Infra-red Sensors?One of the major reasons being that infra-red sensors are not very accurate as compared to ultrasonic ones, I didn't use them for the purpose of detecting obstacles. Moreover, it also doesn't work well in bright sunlight conditions/outdoors and will also pass through transparent objects.

Following are the parts and tools that were used for this project:

Step 5: Making An Enclosure For The Project

So the very first step in the building process was to cut wood for making an appropriate enclosure. Wood, being cheap, durable and easy to work with was thus the first choice.

Initially, I wanted to make the torch as small as possible, but it was made a little bigger so that all the parts can accommodate easily. The dimensions are as given below (or in the image above).Using a sheet of plywood, cut all the parts with a hacksaw. If needed, sand them at the edges. The ultrasonic sensor is then to be mounted on front part as shown above.

Stick three of the cuttings mutually perpendicular to each other as shown in the image above. The rest of them will be added after all the wiring is done.

One of the most important and tedious steps, all the wiring work has to be done here. The entire process has been briefly described below:

Making a shield for Arduino: This makes the connection part more easy and allows the arduino to be plugged in and out any time. Using a piece of perforated board, solder some female headers each for a pin on the pro mini. Then solder male headers adjacent to all the female ones. Check, by plugging the board in if it's all done correctly.

The Schematic: The picture above describes the schematic diagram of the entire project. Arduino pro mini in the middle, acting as the processing unit and all the components are then connected to it. A BC547 NPN transistor was used each for the buzzer and vibrator because the output pins on arduino aren't able to provide enough current, this the transistor acts as a amplifier. 10K represents a 10 kilo-ohm resistor which is necessary to ground the buttons. The pins marked with an 'A' represent analog pins which are mostly used for input while the pins marked with a 'D' represent digital ones which are used for digital output.

The Sensor: Has to be connected as per the following-

The Motor: Vibrates when the distance of obstacle goes less than 60cm. Since the output of arduino isn't enough to directly drive a motor, a BC547 transistor was used. Pin no. used was D10 (for connections, refer to the schematic)

The Micro-Buzzer: Beeps when distance < 100cm and rate of beeping increases with decrease in distance. As done in the case of motor, a transistor was used here as well. Pin no. used was D11 (for connections, refer to the schematic)

The Trigger Buttons: 2 buttons were added to this project, pressing one of them would trigger the buzzer mode while the other would trigger vibration mode. Pin nos. used were A1 and A2 (for connections, refer to the schematic)

Some of the parts were connected using jumper wires while others were directly soldered to the shield.

Since Pro mini lacks an in-built programmer, you will need a working UNO or Nano to program the board (an FTDI board would also work).

Arduino, here would act as an in-system programmer which means that only the programmer part of the board will be used.

Then, you will need to make the following connections. Do so by plugging in your pro mini to a breadboard.

Now download the ino file given below, set Tools>Boards to 'Pro mini', Tools>Programmer to 'Arduino as ISP', then go to files and click on 'Upload Using Programmer' (NOT Upload).

Remove all connections and repeat the above process if an error occurs. If it still doesn't upload, you may need to re-burn the bootloader. Full instructions here: https://www.arduino.cc/en/Tutorial/ArduinoToBreadboard

The rest of the wooden attachments now have to be placed. Three of them were first stuck together with instant glue, then were mounted using a clamp. It could have directly been stuck, but I didn't, for making it openable and for performing any changes in connections.

Rest of the changes depend upon you..

For powering this project, I chose a 3.7V, 1050mah Lithium ion batter, as described before. It always has the advantage of being small in size and extremely light-weight, proving good power at the same time (lasts for roughly 2 hours). However, you can also use AA or AAA batteries.

For convenience, I also added an on/off switch and an indicator LED to prevent the device from being unnecessarily on.

So this brings another project to an end. Any questions/suggestions can be posted in the comment section below. 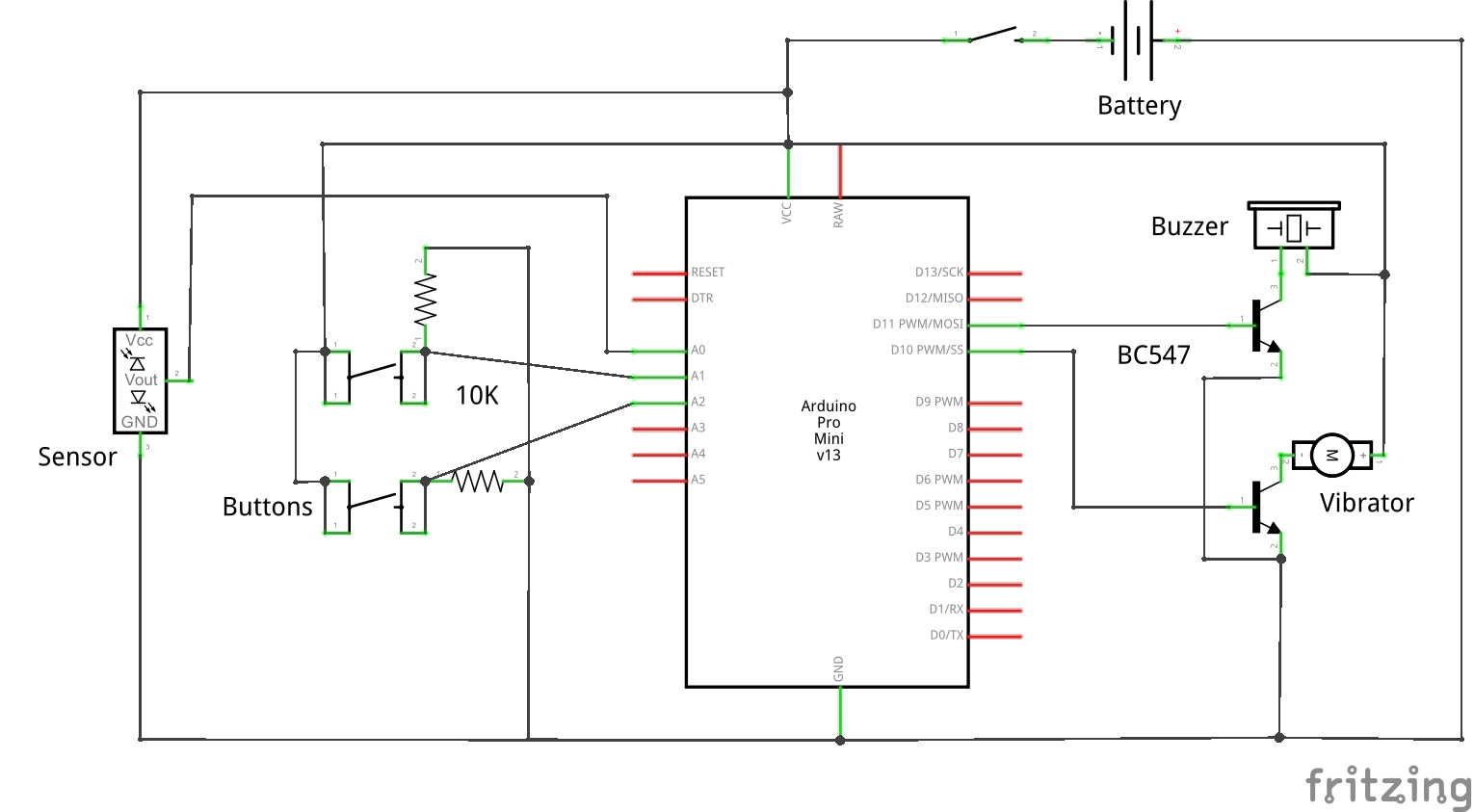 1 project • 3 followers
Currently a student (11th std.), I like to make random DIY projects when free. It's more fun when you learn rather than study things.
ContactContact