This project shows how I automatically capture and classify images of birds visiting my bird feeder.

This project shows how I automatically capture and classify images of birds visiting my bird feeder. 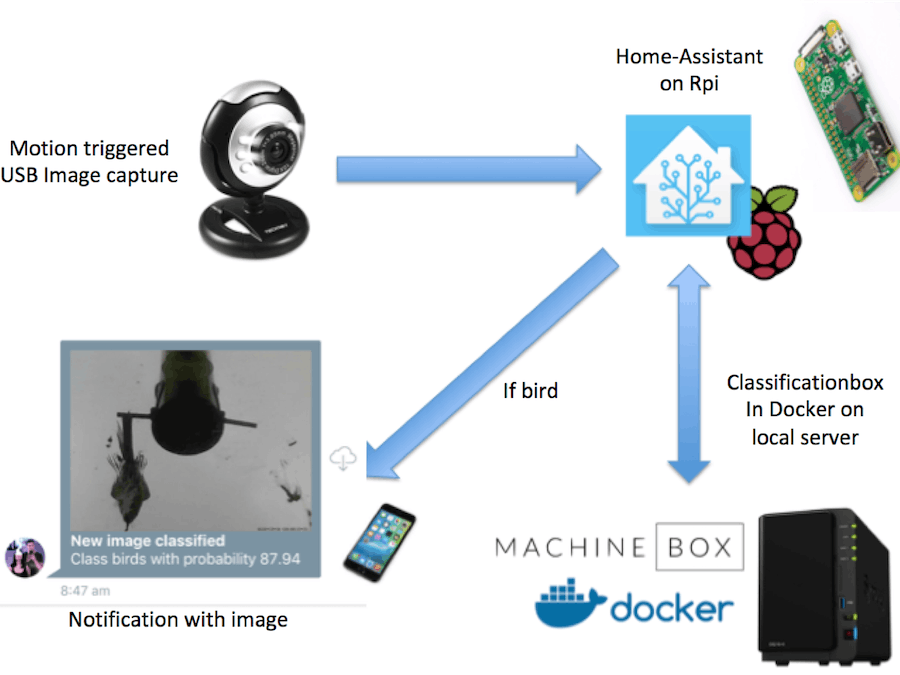 Being interested in bird watching, I attached a bird feeder to a window of my flat and within a few days various species of bird started visiting the feeder. I decided it would be fun to rig up a motion triggered camera to capture images of the birds, and I used Home-Assistant and a £10 USB webcam to capture images via motion trigger, and set up Home-Assistant to send an image notification to my phone when an image was captured. This setup is shown below:

However I quickly discovered that all kinds of motion could trigger an image capture. The result was hundreds of images of all kinds of motion, such as planes flying in the distance or even funky light effects. Approximately less than half the images actually contained a bird, so I decided it was necessary to filter out the non-bird images. I have been interested in image classification for a while, and whilst searching online I came across this article on Classificationbox, which looked ideal for this project. This write-up will first present the image classification work using Classificationbox, then describe the practical implementation within an automated system. Tools used:

Classificationbox provides a ready-to-train deep-learning classifier, deployed in a Docker container and exposed via a REST API. It uses online learning to train a classifier that can be used to automatically classify various types of data, such as text, images, structured and unstructured data. The publishers of Classificationbox are a company called Machinebox, based in London, UK. Their docs advise that the accuracy of a Classificationbox classifier improves with the number and quality of images supplied, where accuracy is the percentage of images correctly classified. If you have less than 30 images of each class (bird/not-bird in this case, so 60 images total), you may achieve better accuracy using their alternative product called Tagbox, which uses one-shot learning. I initially experimented with Tagbox but found that in many cases it could not identify a bird in the images since the illumination in the images is poor and often the bird appears as a colourless silhouette. After a few weeks of image captures I had over 1000 images of bird/not-bird so could proceed to use Classificationbox. I have uploaded the image dataset to Quilt.

Assuming you have Docker installed, first download Classificationbox from Dockerhub by entering in the terminal:

Then run the Classificationbox container and expose it on port 8080 with:

You should see a response similar to:

The if you don't get "success": true investigate the issue, otherwise you can proceed to training.

This article explains the training of Classificationbox, and links to a GO script which can be used to perform training. However if you have difficulty getting GO installed on your system (it took me a few tries!) I've also published a training script in python called teach_classificationbox.py and included the code in this article. However one advantage of the GO script is that it will both create a model for you and print out the accuracy of your trained model, which are features I will add to the python script in time. Whichever script you use, the first step is to decide on the classes you want to identify, and create a model. If you aren't using the GO script, you can create a model using CURL:

For this project I wanted two classes, bird/not-bird images, with examples shown below. So in the above CURL the classes are bird/not-bird.

The two classes of image I wish to classify

I had a total of over 1000 images that I manually sorted in two folders of bird/not-bird images, with each folder containing 500 images (this number may well be excessive, and in future work on this project I will experiment on reducing this number). Make sure that the images you use for training are representative of all the situations Classificationbox will encounter in use. For example, if you are capturing images at day and night, you want your teaching image set to also include images at day and night. With the images sorted into the two folders, I ran the GO script mentioned earlier and calculated that the model achieved 92% accuracy, pretty respectable! For 1000 images, teaching took about 30 minutes on my Macbook Pro with 8 GB RAM, but this will vary depending on you image set and hardware.

Classificationbox is capable of hosting multiple models, and you will want to know the model ID of the model you just created. You can use cURL to check the ID:

Now that the model is created we can use another cURL command to perform a classification on an test image `bird.jpg`. I enter:

You will want to replace my model ID (5b0ce5d8023d4e35) with your own. Note that just heading to the URL above in your browser will also download the file. The downloaded file is 60 kb, so small enough to be shared on Github and elsewhere online. This is useful if you want others to be able to reproduce your work.

To post the model file to Classificationbox use the cURL:

Home-Assistant is an open source, python 3 home automation hub, and if you are reading this article then I assume you are familiar with it. If not I refer you to the documents online. Note that there are a couple of different ways to run Home-Assistant. In this project I am using the Hassio approach which you should read about here, running on a Raspberry Pi 3, and a home-Assistant version newer than 0.70. However it doesn't matter how you have Home-Assistant running, this project should work with all common approaches.

I connected the USB webcam to the Raspberry Pi running Home-Assistant and pointed the webcam at the birdfeeder. There are a number of options for viewing the camera feed in Home-Assistant, but since I am using Hassio and want motion detection, I decided to try out an approach which uses the Motion software deployed as a Hassio addon. Hassio addons are straightforward way to extend the functionality of Home-Assistant, and are installed via a page on the Home-Assistant interface, shown below:

The addon I am using is called Motion, available at https://github.com/lovejoy777/hassio-addons. You will need to add his repository as a location accessible to Hassio (search for the box that states Add new repository by URL). The addon will both continually capture still images, and capture timestamped images when motion is detected. I experimented with the addon settings but settled on the configuration below. The addon is configured by the Hassio tab for the addon:

The addon captures an image every second, saved as latest.jpg, and this image is continually over-written. On motion detection a timestamped image is captured with format %v-%Y_%m_%d_%H_%M_%S-motion-capture.jpg. All images are saved to the /share/motion folder on the Raspberry Pi. The above configuration should work regardless of the USB camera you are using, but if you have several USB cameras attached to your Pi you may need to use the terminal to check the camera interface (here /dev/video0). If you want to download the saved images install the SSH addon, configure it to use a password, then install FileZilla and connect via SFTP. You can then browse and download images via the FileZilla UI, shown below:

Note that the image files (here latest.jpg and dummy.jpg) must be present when Home-Assistant starts as the component makes a check that the file exists, and therefore if running for the first time just copy some appropriately named images into the /share/motion folder.

The final view of the camera feed in Home-Assistant is shown below:

Note that by default the image will be classified every 10 seconds, but by setting a long scan_interval I am ensuring that image classification will only be performed when I trigger it using the image_processing.scan service described later. Note that the image source is camera.dummy, which will be the motion triggered image. The Classificationbox component fires an Home-Assistant image_processing.image_classificationevent when an image is classified with a probability greater than a threshold confidence of 80%, and we use this later to trigger a notification.

Tying it all together

Now that image capture is configured and Classificationbox is available to use, we must link them together using a sequence of automations in Home-Assistant. The sequence that we setup is illustrated in the diagram below, where the blue arrows represent automations:

The folder_watcher component fires an event every time a new timestamped image is saved in /share/motion when the file name matches the pattern *capture.jpg (as the timestamped image file names do). The event data includes the file name and path to the added image, and I use an automation to display the new image on camera.dummy using the camera.update_file_path service. The configuration for the automation is shown below, added to automations.yaml:

Finally I use the image_processing.image_classification event fired by the Classificationbox component to trigger an automation to send me any images of birds as a Pushbullet notification:

The notification is shown below.

So finally we have achieved the aim of this project, and receive a notification when a bird image is captured by the motion triggered camera.

Now that I have basic recognition of when a bird image is captured, the next step for this project is to train the classifier to recognise particular species of birds. I have a range of species visiting the birdfeeder including Blue Tits, Robins, Dunnocks, Magpis and even Parakeets. However the vast majority of the visitors are Blue Tits, and I have so far captured relatively few images of the other species, which will make training a classifier on these species more tricky. I may have to use photos of these species from the internet, but another idea is to curate a dataset of user contributed images which will be used to create a 'community' classifier that can be shared. This would allow local studies such as this one to be reproduced at a large scale. I will also investigate ways to capture the statistics on visiting birds using counters, and create a custom component to allow people to automatically submit their bird data to studies such as the RSPB annual Birdwatch survey.

In summary this article has described how to create an image classifier using Classificationbox, and how to deploy it for use within an automated system using Home-Assistant. A cheap USB webcam is used to capture motion triggered images, and these are posted to Classificationbox for classification. If there is a successful classification of a bird then the image is sent to my phone as a notification. Future work on this project is to train the classifier to identify different species of birds, and investigate ways to create a community classifier. One slight issue I have is that a Magpi has recently been trying to rip the feeder off the window (shown below), so I need to do some work to make it Magpi proof (Magpi destruction efforts shown below)! Additionally, now that it is Summer, this seasons crop of baby birds have fledged and my bird feeder has very few visitors as there is now abundant food in nature. However I will continue to refine the system and aim to deploy it next Spring. I hope this project inspires you to try out using deep-learning classifiers in your projects.

A Magpi either intentionally or unintentionally almost rips the bird feeder off the window. The arriving Blue Tit is unable to feed normally owing to the position of the feeder, but finds another way to feed via a hole in the top of the feeder! 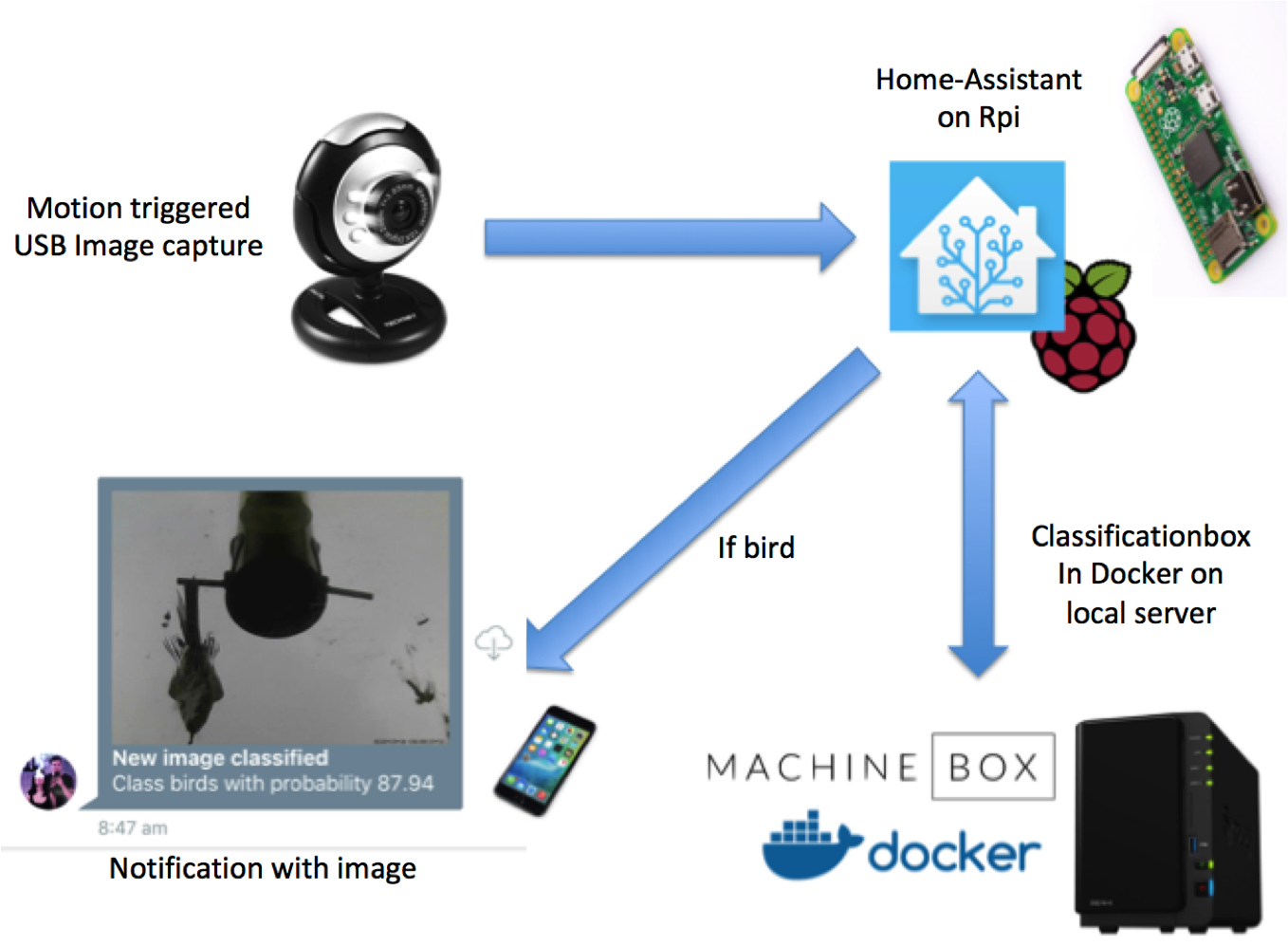