Making a simple quadruped which can move in a straight under static stability.

Making a simple quadruped which can move in a straight under static stability. 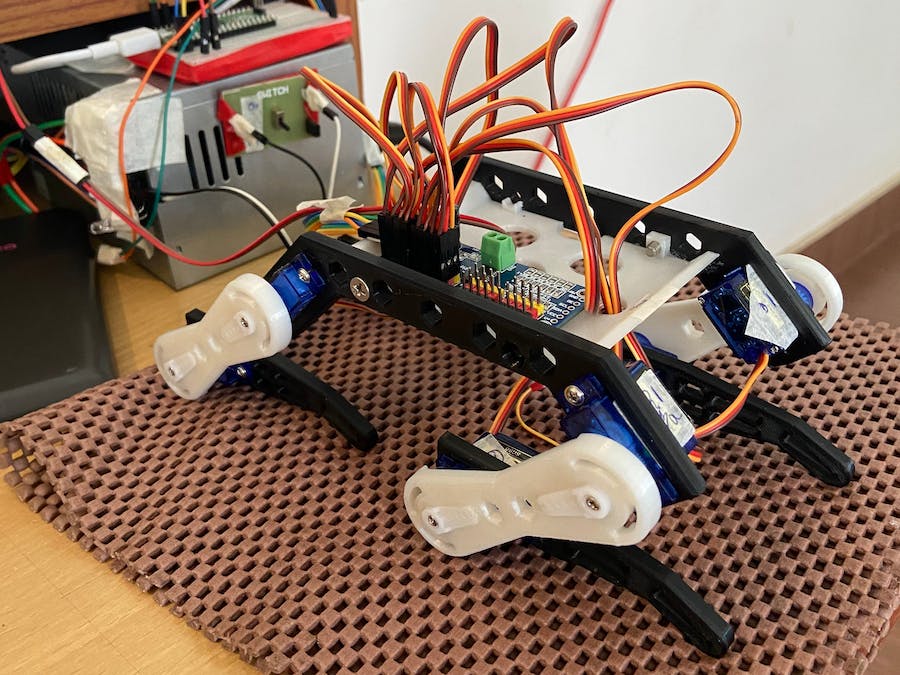 This robot was built from scratch and I had to reiterate on the core concepts a couple times. It was built under tight time constraints. The final product here is not a 100% working model (yet) due to some software and hardware kinks ( I'll list the ones I found below). The codes have been put on my GitHub repository and any and all suggestions to improve upon it is most welcome.

There are obviously better and more efficient ways to go about making it. But this is the method I followed and I would recommend reading the whole thing instead of blindly jumping into the build, as this is more of an explainer rather than a project that gives you a solid working model in the end.

An ideal quadruped should have 3 dof on each leg, allowing it to have the full range of motions, i.e. it can move forwards, backwards, sideways, rotate etc. But as this was my first project of this type, I decided to give the legs only 2 dof. This means it can only move forwards and backwards. The robot is statically stable, meaning at any given time at-least 3 legs are on the ground and it will maintain its balance at any point of its motion.

Before going into the movement and inverse kinematics, I would like to jump forward a bit and show my initial two models, and point out the shortcomings of each.

Yea.... so this was made with scrap acrylic strips and attaching the servos directly by screwing the servo horns onto the strips. The major issue with this was the servos weren't sturdy enough to keep the legs straight and it was a wobbly mess.

Too heavy to hold its own

To fix the wobbliness, I attached the legs (still acrylic, just black) to a sturdy support and then used a hinge mechanism to connect the servos to the legs. The inverse kinematics were arguably more harder to solve and it sort of moved to complex number fields and I had to use Matlab and curve fitting to make it into a manageable form.... there must've been easier ways but that was the only one I could think of, it worked nonetheless and the legs did move how I wanted them to. But this model was too big and heavy for the servos I had to handle and it kept slipping. Maybe if I had used stronger servos this could've worked....

Now that I've shown you how not to go about making the robot, let's jump back and see some basics on the components and theory.

Servos are motors that you can rotate and set to a specific degree. Inside a servo you have a motor, a potentiometer, an IC and a gear assembly. The motor turns the gear assembly, and the rotation is measured with a potentiometer which then informs it to the IC, which then rotates the motor as needed till the specific angle is reached. We specify the angle to be set using PWM (Pulse Width Modulation) which are pulsations of DC voltage, the length of which is used to set the angle of the servo. More info on Servos and PWM can be found here.

The Servos I used were the smallest and cheapest I could find. They're a bit too fragile and I burnt through quite a few over the course of the project. But there are higher quality metal gear servos available that last longer and provide more power if you need it.

So the robot is made to move in such a way that for any point in its movement if I were to freeze it, the robot would still be stable. This is done by ensuring that at any given moment at least three of its feet are touching the ground, and the center of mass of the robot is approximately over inside the triangle made by the three points.

This is an ineffective way to go about it for anything more than a basic robot that walks forward and backwards. More complicated robots make use of sensors to check if they're tilting too much and make real time adjustments to maintain balance.

The robot motion is such that it will start in a position with two diagonally opposite legs placed one step forward. Then:

Also, from now on the point of interest are the ends of the legs, and I will be referring to their positions, assuming the point of attachment of legs to body as origin and facing from the side of the leg in question. Hence if the leg is behind, under or in front of the body hinge, it'll be in back, middle or front position respectively.

It can be seen that the movements are a combination of a few fundamental movements on each legs, namely:

There are variations within each movement type, such as whether Beta movement is from back to middle or middle to back or Gamma does nothing while at back, middle or forward position. I have suffixed them with according to their points of interest with -1, 0, 1, corresponding to back, middle and front positions.

Now we must define functions for each type of movement and then cut and string together the combination of movements for each leg. Both X and Y functions must be made for each movement. Some parameters must be defined for the movement to make it easier to change as needed when coding. These are:

Using these factors and using simple sine, and linear functions we can define functions on both X and Y wrt time for each movement. Then we can use code to join these functions together and make the complete move set of each leg.

I personally used Simulink to prototype the leg motions and join the functions together. I then just translated what I did to code using while loops to switch each function wrt time.

Put together, the X (Blue) and Y (Yellow) functions for each leg looks like this:

Please note the axes values in this case correspond to millimeters, and are calculated using the parameters of stride, ride height etc, I have given. Step time is.5 sec, and remember that there are 6 steps in each cycle, hence each function is repeated every 3 seconds.

Breakdown of different phases of movement of L1

The legs of the robot will be controlled using servos and we can only tell the servos what angles to move into. Hence we must find a formula that tells us what angles to set the servos so that we can get the leg to be a specific point in the Cartesian plane.

Now that we have found out the pattern to move the legs and the formulae to do so, all that's left is building the robot and the programming.

I drew the inspiration for the body from some models I found while looking around the internet. I made the models in Autodesk and 3D printed it. The one problem I ran into with my model was that the robot wasn't wide enough, and therefore it wasn't as stable as I hoped it would have been. Hopefully this can be fixed by increasing the width of the main body plate. I had provisions to screw the main plate to the side rails, but it broke as soon as I tightened the screw, so I just used superglue, and that gave me a very strong, sturdy bond.

There are provisions to glue the servo horns onto the legs, but the horns aren't a standard size and you may need to tinker with the dimensions in the 3d model. I used a narrow awl to make small holes to screw the servos onto the arms and rails. It holds fine, but if you want a more sturdier fit, you can always glue them together.

I would also recommend making a sort of cover to sit on top of the main plate, to hide the circuit boards and batteries, if you plan to use onboard power. The way I set it up, the servo driver is powered using a big-ass Power supply and the Pi not placed on the robot. The wires are free, so maybe some provision can be made into the chassis to route the wires for a more cleaner look.

I'll upload my CAD models, but I should warn you it is far from perfect, and it requires some tinkering, or even a complete overhaul for optimal functioning.

The code I used for this can be found on my GitHub repository here.

There isn't much to the wiring. Just a few pointers:

So the Servo sets its angles according to the duty cycle of the PWM. Using code, we send the board values that typically range from 1000-9000. But the exact value for the angles vary between each individual motor, and must be calibrated for each.

First start by finding the limits of the motor, send duty_cycle values below and above 1000 and 8000 till the servos wont move. Whether or not the zero degree corresponds to the higher or lower limits depends on the side on which the servo is placed, and must be noted, here lower limit means that limit which corresponds to 0 degrees and vice versa. The formulas were derived under the assumption that the position corresponding to zero degrees for the upper limb is parallel to the chassis and for lower limb is parallel to upper limb. First mount the servos onto the chassis and lower limbs. It will be useful to number each servo so as to avoid confusion.

Take the upper and lower limits and get its average. Set the servo duty cycle to the average value obtained. Now place the upper limb such that it is almost perpendicular to the chassis, it needn't be accurate. Now try varying the duty_cycles such that the limb is as parallel as possible to the chassis, for both 0 degrees and 180 degrees. Note down these value, and repeat for the other three limbs.

Similar to the upper limbs, find the average, set the servos to the middle value, and place the limb almost perpendicular to the upper limb. Find the limits corresponding to 0 and 180 degrees and note them down. Repeat for the other three lower limbs.

These values are to be inputted into the code in the corresponding data array.

So now that we've built the robot, and downloaded the code onto the micro controller, all that's left is to run it, test it and troubleshoot it. I'll list a couple of kinks to be noted and be on the lookout for:

The entire project was a very awesome learning experience for me. I knew little to nothing about micro controllers, servos and 3D printing. I had to even learn Matlab & Simulink and brush up on my Autodesk skills. I am very glad that I attempted this and, even though it isn't totally how I wanted my final product to be, it did exceed my expectations of what it would turn out to be. I hope that this helps you at least get started with building your own quadruped robot.