A complete DIY weather station that submits its data to the "THINGSPEAK" website, where it can be viewed from any browser.

A complete DIY weather station that submits its data to the "THINGSPEAK" website, where it can be viewed from any browser. 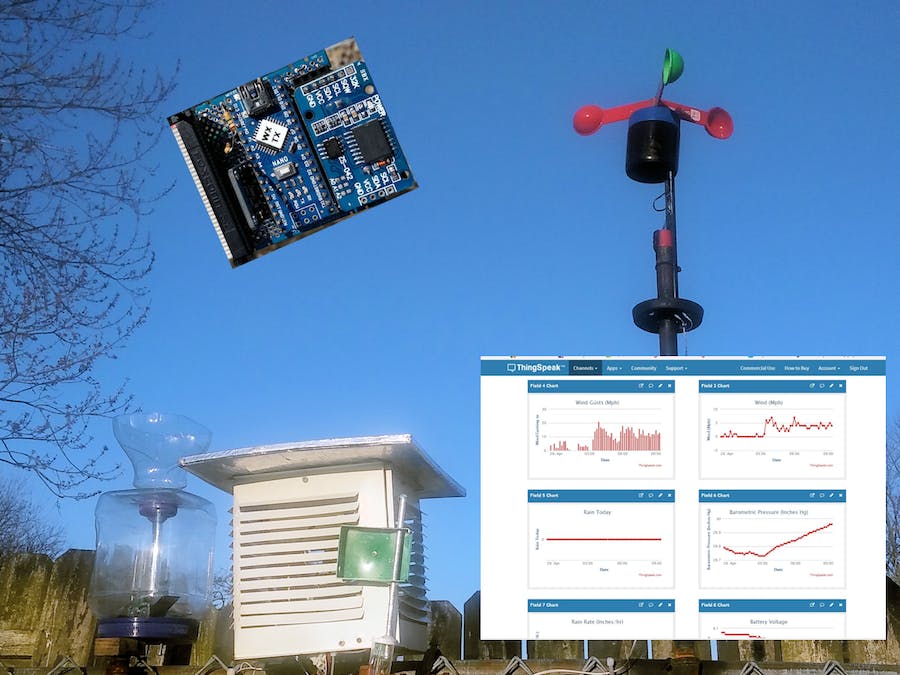 This project began shortly after I put my buddy in the crawlspace. Now before you start freaking out and calling law enforcement, my "Crawlspace Buddy" is 4 temperature sensors-1 outdoors, and 3 in the crawlspace at critical locations. Readings from these are used to control a supplemental heater when temps get too cold, preventing frozen pipes in my 110 year old house. There is also an ultrasonic distance sensor mounted to a joist that measures the water level if flooding occurs. That project reignited a long term dream of building my own weather station. It has now become rather complex system, with 3 separate microcontrollers communicating, and finally sending the data to the internet.

I started with a DHT22 temp/humidity sensor that I already had on hand, and an Arduino Nano.(For the record, I am not a big fan of the DHT sensors, and will eventually be upgrading.) I then built a "Tipping Bucket" rain gauge, immediately followed by an anemometer. Both the anemometer and the rain gauge use Hall effect sensors and magnets for detection. I also added a barometric pressure module and real-time clock. Next, I built a vented box to house the DHT and the weather station circuitry, and mounted all on a fence about 100 feet from my house. All data was only sent by bluetooth to my phone at this stage, so I also added a RF transmitter (433Mhz).

I then built the data receiver. I took a Superheterodyne RF Receiver module, built a parabolic antenna for it, and connected it to to the Arduino MEGA type board that was already on my desk, monitoring my "Crawlspace Buddy", and parsing/processing the data. I decided at that point that the MEGA would become the data/control center for several of my planned home monitoring projects. The MEGA is in the photo below, buried under a MEGA proto shield, and a LCD which is mounted on a UNO shield.

The MEGA with display showing Crawlspace Buddy Temps-Outdoor, Furnace, Utility Room and Kitchen
The Parabolic Antenna-Board shown is NOT the Superheterodyne RF receiver I am currently using

Finally, I needed to implement the last link in the chain of the project-connecting it to the internet, so I could monitor the weather at my house from anywhere in the world, because... well, who doesn't need that capability? After several futile hours with an ESP8266 module and breakout board, I consulted the Arduino Forums, and decided I should seek out a separate ESP8266 based Development board. Based upon several posts I had read, I decided a board by NodeMCU sounded like my best choice, and a search on Amazon found a "Weather Station Kit" that included a NodeMCU ESP8266 board, a DHT11 temp/humidity sensor, and a.96" OLED Display. It would retrieve weather and forecast data from "Weather Underground", correct time from a time server. It would then send temperature and humidity reading from the DHT to the "Thingspeak" website, where it would display on graphs. ("Thingspeak" is a site that allows you to track data over time, and display it on graphs. It is free for up to 3 MILLION data points per month. It also has tools you can use to visualize/analyse your data.) The time/weather data retrieved by the NodeMCU are displayed on a series of 4 scrolling screens on the OLED. This was perfect, as at this point, I did not know how/where I was going to use the data, and this kit showed me much of what I needed to know to get it going. I liked the little weather station kit so well, I decided to just use it as a network interface for the Ardino MEGA, and otherwise keep it doing it's original job as a nifty little weather IOT device. So I established a serial connection between it and the MEGA, mounted it in a little box, and added the necessary code to the NodeMCU program. Once every 10 minutes, it receives a data summary from the MEGA, and submits it to the "Thingspeak" website. Here is a link to my public channel with my live weather data. https://thingspeak.com/channels/463187

Issues to be addressed

As is typical of any complex project, there were/are issues that must be addressed during development. For this project project, power for the outdoor station is a main issue. I am using 3.7v 18650 type batteries (2) to supply power to the monitoring station. I eventually want to incorporate solar charging, but that will come later. For now, I just monitor the voltage, and change the batteries when needed. I have several sets so I always keep a set charged. These batteries have proved to have a mostly linear operating range for my application of 8.4 volts at full charge, to discharged at 7.4v, the point at which the voltage begins dropping at a much quicker rate. I use a buck converter to drop that to a regulated 5v for the system, and this 5 volts is also connected through an OptoMOS relay to the input of a boost regulator to output 9.6v to the transmitter. This supply is only switched on during actual transmission of data packets once every minute. (Each data packet is sent 2 times to help prevent data loss, as this is only a one way RF link.) To maximize battery life, I also implemented sleep/power saving, disconnected the resistors to the LEDs on the Nano, and eliminated the on board regulator, since I am delivering a regulated 5 to the board. This has my power consumption down to about 11 mA when in power save mode, 16 mA during normal operation, and about 24 mA during RF transmission. Since both wind speed and rain readings are generated by interrupts, to keep wind measurement accurate, the Nano only goes into power save when there are no input pulses from the anemometer for a 10 full seconds. With this current setup, I get about 48-60 hours on a set of fully charged batteries before I must change them out. Wind makes a significant difference in the potential battery life, thus the wide range.

This project has already taken about 3 months of my spare time, and will probably take several more to fully implement. I want to add a weather vane to monitor wind direction. Schematics and code to be posted when time allows. Oh, and the reason for the "Rube Goldberg" title? My son called the weather station a "crazy contraption", and it really is a hodge-podge of circuits/devices, so the name just seemed to fit. One other "feature" that it has, although I rarely turn it on due to massive current draw, is a set of Ultraviolet LEDs. They shine on the anemometer, and one cup of the anemometer is painted with green fluorescent paint. When this is turned on at night, you see a little green ball of light floating back and forth. The purpose of this is to give neighbors and passers-by something to think about!