An incredible and simple project that allows the user to detect the UV radiation levels and share them with the community.

An incredible and simple project that allows the user to detect the UV radiation levels and share them with the community. 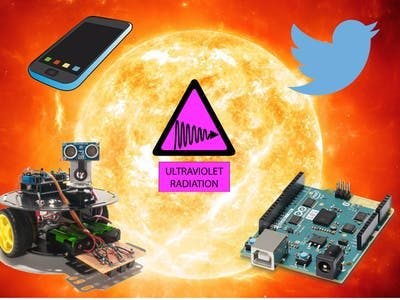 The Sun is responsible for warming Earth’s atmosphere and its oceans and for providing with the necessary light energy for plants to transform it into chemical energy during the process of photosynthesis. Long story short, life as we know it would not be the same without it. However, the Sun also emits Ultraviolet radiation, which has harmful effects on living organisms after prolonged exposure. Although small amounts are beneficial, being under the sunlight for too long may cause sunburns, degenerative changes in skin cells, and in the most severe cases, skin cancer. Therefore, it is very important to raise awareness, so that people can take the proper precautions if the UV radiation levels in a certain place are too high.

“Hyperion” is not only the name of the god of watchfulness, wisdom and light in Greek mythology, but also the title of my idea. Hyperion is a small station that will be able to monitor the UV radiation present in sunlight. Due to unforeseen events, I was unable to implement all of my ideas on the project. Nevertheless, Hyperion will be able to determine if the radiation is harmful, and send a short tweet that contains information regarding its levels, remainders to use sunscreen, sunglasses and prevent a long exposure if the readings fall on the UVB (burning rays) spectrum.

By using the Arduino 101 Board, Hyperion will be controlled by a phone app and will be able to send tweets thanks to its Bluetooth LE capabilities. . With a ML8511 sensor and 3D-printed parts, this monitoring station will use social media to raise awareness and improve the health of the inhabitants of a city, beach, farm or any place where it is located.

In the meantime, I will submit part of the project in the hopes that the hackster community will be able to contribute with improvements for the code and for my idea. The Arduino 101 interprets the information received from the ML8511 sensor, and it displays the readings on the Grove-LCD.