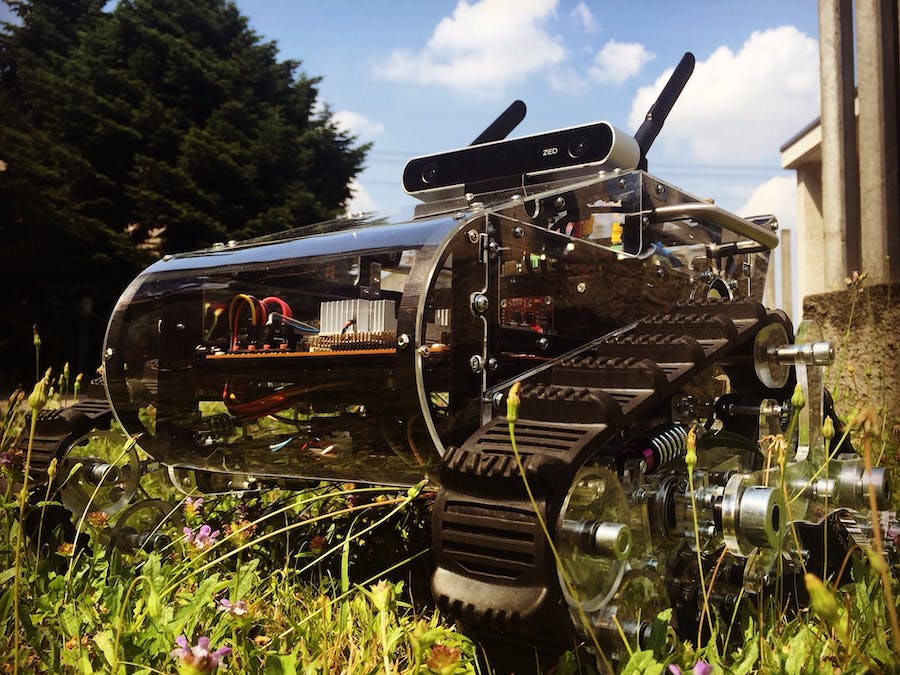 Panther is an outdoor tracked robot, with a ZED2 stereocamera and an NVIDIA Jetson AGX Xavier, this robot can interact with all objects around it.

A robot to explore the world.

This robot can climb little rocks and little bumps. It has a weight of 9kg and with size of 42cm width, 40cm deep and 30cm height, have a ground clearance of 7cm. The tracks have a particular damping system, with three different dampers to absorb all vibration when the robot drift on the grass. This robot is integrated on ROS and all code is available on Github. Panther is built with different materials that plexiglass, aluminium, plastic.

Panther with NVIDIA Jetson TX2 and ROS the Robot Operative System can be moved outdoors. In this video you can see how it can work the damping system inside the tracks.  To recognize and interact in the world, Panther use a ZED stereocamera, and to control the two DC brushed motors, use the unav board, a little board for motor control.

Simultaneous Localization And Mapping (SLAM) is used for Panther robot to localize and map an unknown area. With a 3D slam reconstruct the world near it. This process consists of a number of steps, filtering the information from different sensors, estimating the position with cameras, reobserving the environment, the robot moves around and updating where the robot thinks it is based on these features.

Components - A detailed guide to all robot parts

A new type of Tracks with an internal damping system to climb over all little bumps. Each Track have three parts that move on an axis. The tracks are built with plexiglass and aluminium.

The heartbeat is inside on this chassis. All components are detailed deals in this page. From the motor control board to the high level control board with an NVIDIA Jetson TX2.