Use a 120VAC Pilot Light and a photoresistor to create a simple inexpensive AC voltage sensor based on opto-isolation.

Use a 120VAC Pilot Light and a photoresistor to create a simple inexpensive AC voltage sensor based on opto-isolation. 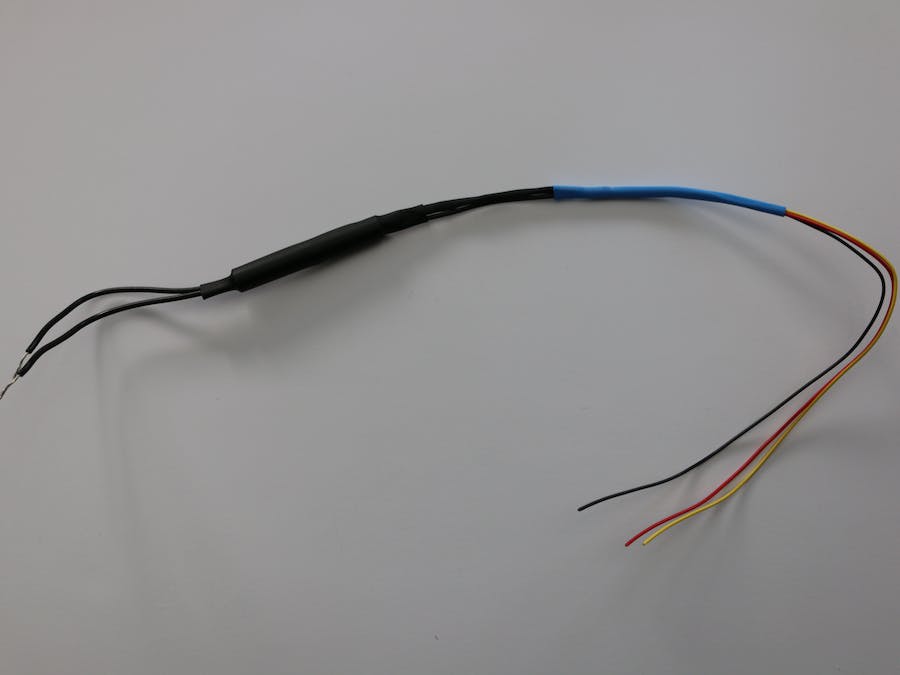 In an effort to keep the other project from becoming over-complicated I decided to share the details of building this simple device in a separate project.

A big advantage of this design, other than the low cost, is that the AC circuit is completely isolated from your IoT device. This protects your Raspberry Pi and other circuit components from a power surge.

The circuit design is based on a voltage divider circuit which consists of two resistors in series between the power source and ground (or any higher and lower voltage potential). The voltage is measure from the point between the two resistors and the lower of the two voltage potential points (ground in this case). Usually, in a voltage divider circuit, both resistors are fixed. In this circuit one of the resistors changes its value when the intensity of the light changes allowing the device to alter the output voltage based on the light source.

Shows the typical voltage divider with R2 replaced by a photoresistor

This device is intended as a two state device, meaning, I only want to detect if the AC input circuit is on or off. The output of the circuit needs to be detected by the GPIO pin as high or low. To accomplish this the value for the fixed resistor must be chosen carefully.

The key to the circuit is to determine the right resistor for R1 in the above diagram. The resistance of photoresistor varies by the amount of light. When it is completely dark, the resistance is 90K to 100K Ω. With a fully bright light source it drops to about 200 Ω.

Calculating the correct resistor value for R1 depends on the amount of light available. The light source may not be bright enough to drop the resistance to the lowest measured value. With this in mind I measured the resistance value using the amber pilot light. I performed this measurement by placing the light source inside a black heat shrink tube with the photoresistor press against the light and then measured the resistance with a volt/ohm meter while the light was on. The black tube is necessary in order to simulate the conditions I would have when the device is fully constructed

The tube was not heated for this measurement

The experiment yielded a measurement of 941 Ω. Using the standard formula for the voltage divider (shown in the images below) and targeting low voltage of .75v I determined that the value for R1 needrf to be 3.2K Ω.

In the circuit design, to get 3.2K Ω I decided to use a standard 1K Ω and standard a 2.2K Ω resistor in series (both the 1K Ω and the 2.2K Ω are standard sizes that you will most likely have in your toolbox).

Load Effect When a device such as Raspberry Pi is connected between Vout and ground the device is referred to as the load  This load has an effective input impedance that alters the behavior of the circuit which may warrant a design change to counter the effect. To help understand this effect think of the load as a new resistor added across the Vout and ground on the circuit diagram. In this device, when used with the Raspberry Pi, the load effect can be ignored because the output current is stable and it is a small percentage of the divider's input current. For this reason I was able to design this as a passive circuit to keep cost low. Devices that perform this function could cost significantly more if they contain regulator circuits to allow for varying loads on the output.

Building this device requires a soldering iron and a good place to solder the components together. There is no PCB board used, I simply connect the pieces together and then shrink wrap them for protection. Make sure you have a good surface to lay the components on.

Now that the device is completed it is time to run a test. I first located a cord I had previously cut from a failed portable air conditioning unit (I saved the cord because it has a built it circuit breaker). Any old two wire extension cord will work. The white and black wires from the extension cord should be connected to the wires of the pilot light using wire nuts. My cord has a third green ground wire which I just covered up with another wire nut. Make sure the connections are tight and do not come loose when moving the device around. Also make sure there are NO bare wires from the cord exposed.

DISCLAIMER: Working with high voltage AC current can be very dangerous if you do not know what you are doing. If you are uncomfortable or unsure about how to do this please consult with an expert. You are attempting these tests at your own risk!

Showing the device connected to a three-prong power cord

After connecting the extension cord I plugged the cord into a power strip with an on and off switch to make it easy to test the operation of the device.

Next I connected the red wire from the device to the Raspberry Pi's +3.3V pin, connected the black wire to the Ground pin and connected the yellow wire to one of the GPIO ports on the Pi (I use GPIO 5 in the source code).

The source code used is available in GitHub (see the link below).

The application is a simple view that shows the status of the GPIO pin as "High" or "Low". When connected turning the power strip off will result in the display showing "High". Turn the power on the status will change to "Low".

The XAMl for the main form is shown below.

The code behind for the main view is shown below.

To test the unit deploy the code to the Raspberry Pi and start it using F5. Once the application is running, switch the power on and off on the power strip and the display will change each time.

This device can also be used with a 5V logic device such as the Arduino.

Both well within the desired range for either a 3.3V or 5V logic circuit.

I gave some thought to adding a trimmer (a pot type potentiometer) to allow for calibration of the device. I didn't try it mainly for the reason that I didn't have one. Depending on the type of light source, it may be easier to build the circuit with one of these and then calibrate the device after it has been built. The size (ohm range) of the pot should be carefully chosen to fall within the range needed to get the correct voltage. 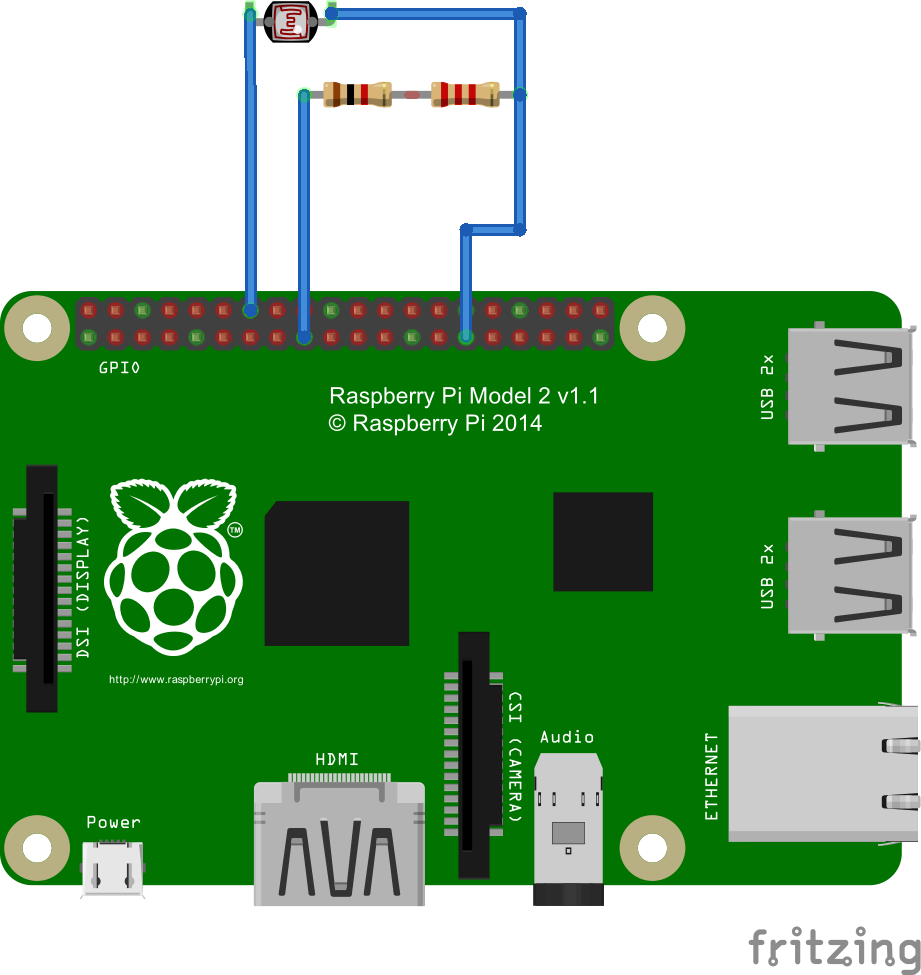 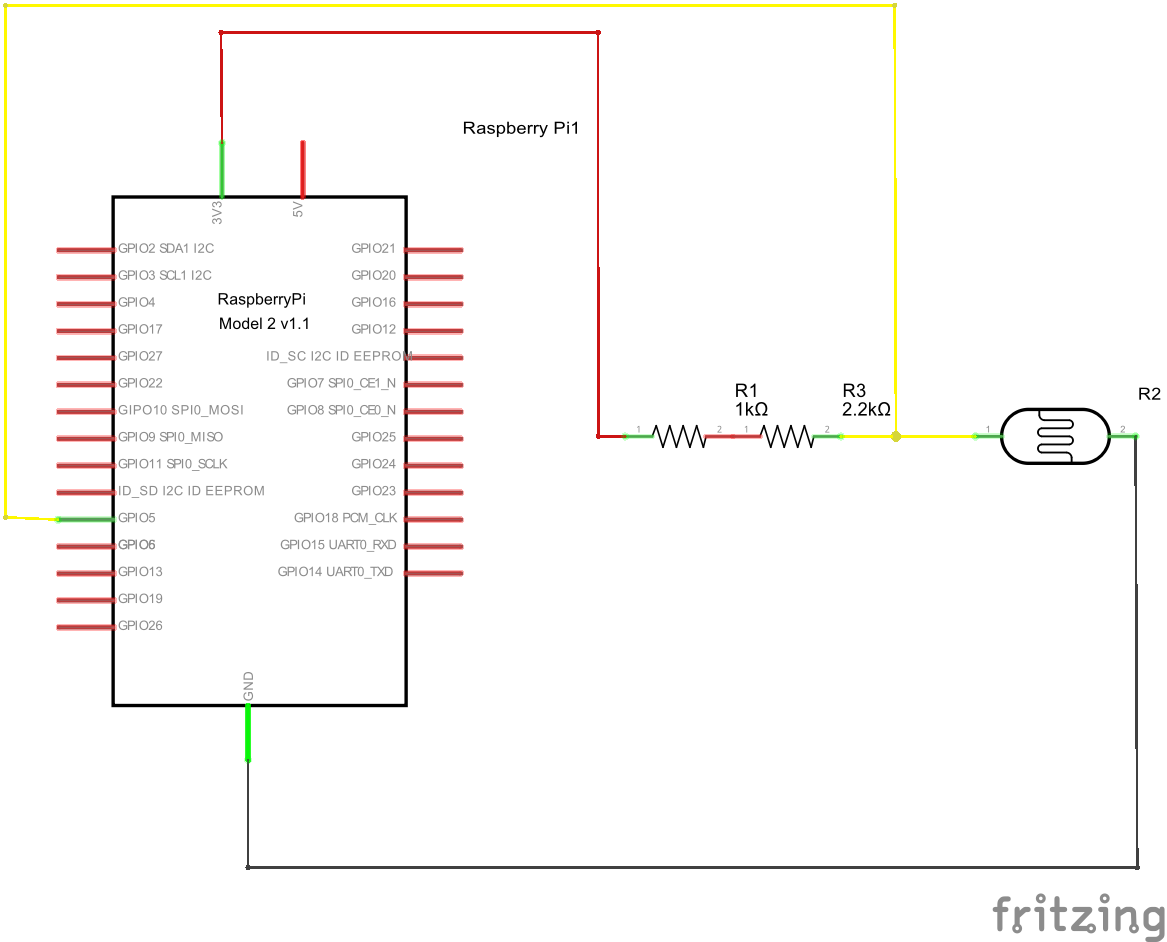 50 projects • 303 followers
I lead a software development team for a large Chicago based organization. I also develop applications personally.
ContactContact