This guide will allow you to control a robotic arm to pick up and move objects without having to touch anything! We will be using a Flick.

Raspberry Pi as a Robotic Arm Controller with Flick HAT

Raspberry Pi as a Robotic Arm Controller with Flick HAT

This guide will allow you to control a robotic arm to pick up and move objects without having to touch anything! We will be using a Flick. 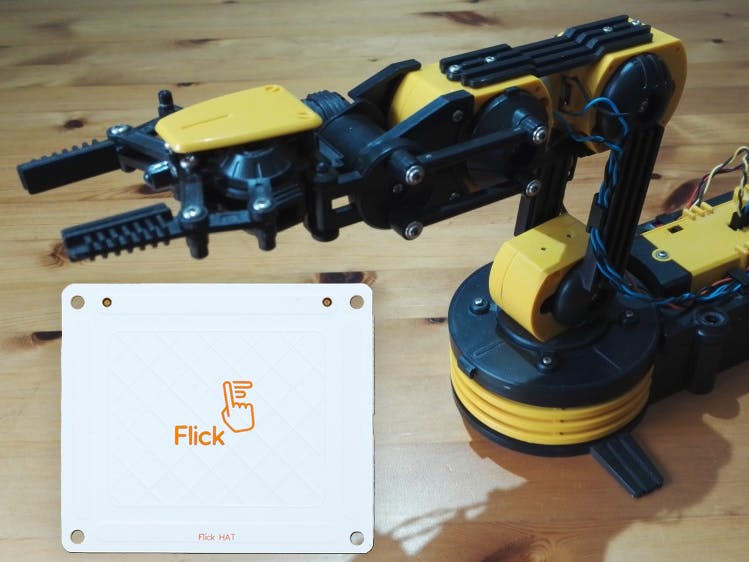 This guide will allow you to control a robotic arm to pick up and move objects without having to touch anything! We will be using a Flick Board combined with a Pi to command a motorised robotic arm. This should work with any Pi and Flick combo if the Flick board is compatible with the Pi, likewise the OS is not limited so any Linux OS that has a Terminal or console will work.

This guide was originally published here.

So now to get into setting up the project.

This project requires no soldering or electronic construction. The only mildly difficult part is the build of the Robotic Arm for which there is a guide that comes with the Arm and there are various tips and guides online.

Parts for this project:

Use these diagrams to wire up the kit taking extra care with fitting the Flick Board onto the GPIO pins.

I suggest setting up SSH on your Pi for convenience by running:

Choose interfacing options then SSH and enable SSH Server. Next we need to go through the basic updates and installations:

Run each of those and let them install. Then we need to get the Flick Board software via:

And to finish the installing section we need the various programs and software which allow the Pi to talk to the Arm. I would suggest, if possible, copy and pasting each of block of code rather than typing out each line separately.

This will install a library that allows the Pi to communicate to the Arm via USB.

Running this line should make the Arm test every motor and then return to its starting position.

Now to test the Flick Board from the demo program:

When this program is running you should be able to see inputs and values as you move your hand over the Flick.

Now the program which allows control of the Arm:

We need to use sudo with the armcontrol because of the RobotArm library which requires direct access to the serial interface.