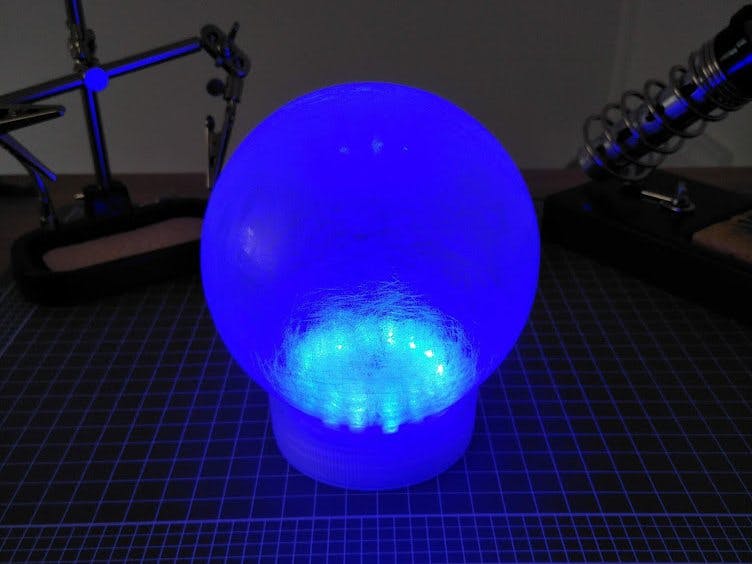 A while back I'd purchased a 5V/1A wireless charging kit without a particular project in mind and so ended up saving it for a rainy day. That rainy day recently came around when I spotted some cheap DIY snow globe kits and LED packs from Little Bird Electronics.

The snow globes are designed to be filled with liquid so come with a plug and screw cap. This plug turned out to be the perfect size to mount 16x5mm LEDs and the receiver coil and circuit of the wireless charging kit.

The coil floats freely and rests on the inside of the screw cap when it's the right side up.

The LED legs have been pushed through the top of the plug, bent over to the next set of legs and then soldered together to create a ring of LEDs in parallel. The wireless charging receiver circuit is secured to the plug with double-sided foam tape (normal double-sided tape doesn't stick to the plastic or the circuit board) and the leads soldered to the LED ring.

I've deliberately omitted a current limiting resistor so the LEDs are as bright as possible when wireless charging coils are a good distance apart. A 5-10mm gap works well.

The inside of the snow globe has been lightly sanded to allow the light to bounce around inside it. This creates a nice glowing effect, instead of just seeing a bright ring of LEDs inside a clear globe.

The lamp is powered from a recycled USB power cable plugged into a 5V/1.2A adapter. I was hoping that I could power the lamp through my workbench, but the coils aren't powerful enough to provide a decent amount of juice though the 15mm thick wood.

This was a fun weekend project which I can build on with some different colour or RGB LEDs, and maybe incorporate an Arduino Nano into the next version too.