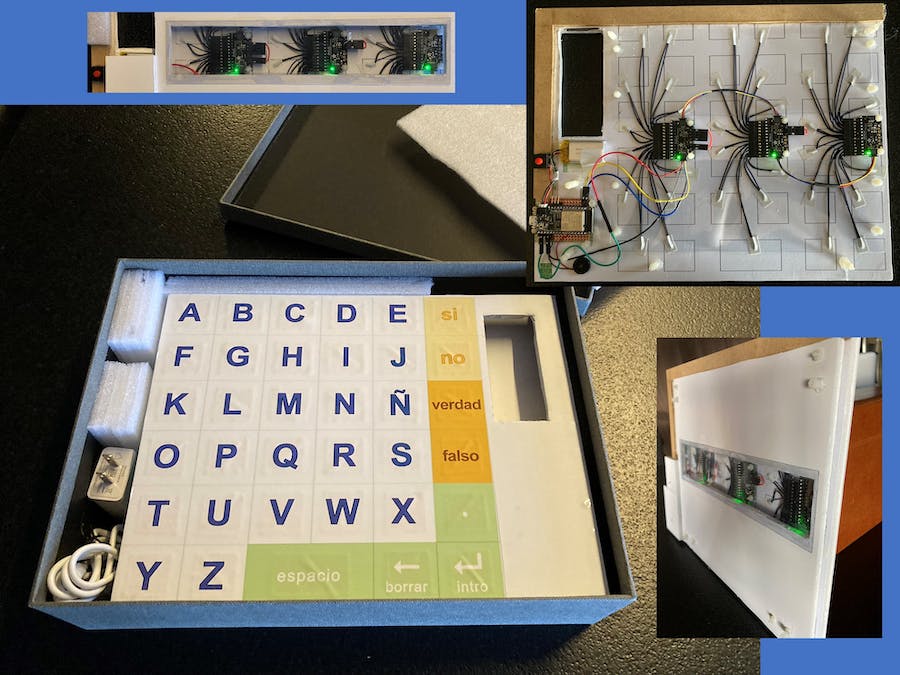 This is the first "production" version of my prototype (www.hackster.io/pedro-martin/bluetooth-rpm-letterboard-7f2ff4).

In a nutshell (full story in the prototype link): The Rapid Prompting Method (RPM) is a technique developed as a vehicle for non-verbal autistic children (and adults) to communicate, that, in effect, unlocks them from a silent isolation and can prove that they are intellectually intact. It can be life-changing for the autistic child and for the people who love them.

RPM uses a letterboard for the student to spell and communicate during the interaction with the facilitator. There are a lot of sensory variables involved. Practice, patience and consistency are only a small portion of what's required.

This letterboard that acts as a Bluetooth keyboard, sending its output to an iOS device that provides typing feedback through its text-to-speech functions.

A first requirement is to recognize the selected letter by a very soft touch, so capacitive touch sensing was chosen. This also allows for custom printed faceplates. Also, it has to be very light for comfortable use in one hour sessions (this version weighs in at 200 grams, similar to a small iPhone. Compare to 600 to 900 grams of a Bluetooth keyboard). Finally, it has to survive constant manipulation by the facilitator.

I chose an ESP32 as MCU because of its speed, BLE and Wi-Fi capabilities (plus a large community for support and libraries). To handle the capacitive touch functions of the letterboard, I chose the MPR121 breakout boards from Adafruit: they are relatively well documented, well developed, and, high quality (as is their HUZZAH ESP32 Feather board). Communication between the three MPR121's (for a total of 36 sensors) and the ESP32 is via I2C. I added a piezo buzzer to provide status feedback in conjunction with the HUZZAH32's built-in red LED. Finally, a 350mAh LiPO battery feeds the ESP32 via a simple On/Off mechanical switch.

The base of the board is made from 5mm foam board (rigid enough and lightweight). The front side has 1 sq. inch adhesive copper tape as the touch sensor for each letter (seen here in mid-assembly, with the wires coming in from the back side)

The back side has 28 gauge stranded wire leading each copper sensor to the corresponding MPR121 breakout board in which I soldered right angle headers to receive the female Dupont connector of each wire. The position of the MPR121´s allow for the shortest path to each sensor: this minimizes capacitive interference and maintains capacitive sensitivity (see Code Considerations and application note AN3863 in RESOURCES for more information on this topic). The I2C bus and VCC/GND connections are made with STEMMA QT cables.

The HUZZAH32 is soldered to a perfboard for better installation on the foam board. It also has right-angle headers to receive female Dupont terminals. Note that I added on the back side, a 1/2" MDF reinforcement at the top and left sides for better survival of daily manipulation.

In both cases (front & back), I designed the layout in PowerPoint and printed these layouts on adhesive vinyl which were then added to both sides of the foam board.

In order to isolate the I2C & VCC wires (STEMMA QT cables) from the 28 gauge stranded wires connecting the copper sensors to the MPR121's (to avoid noise on both), I added a transparent plastic layer, with the STEMMA QT wires on top and the sensor wires below the plastic layer and glued to the foam board.

Side View with Plastic Layer Detail

Finally, I added a back cover from the same foam board with a transparent plastic window to see the (green) status LEDs of the MPR121's. I also added a little foam where the hand will hold the board for enhanced comfortability.

To increase the capacitive sensitivity, I changed the CONFIG1 & CONFIG2 registers in Adafruit_MPR121.cpp. This alters the number of samples, the duration of each sample and other associated filtering parameters. The downside would be a reduced available typing speed, that, for this use case, is not a problem. (See the links for application notes AN3889 and AN3890 in "Additional Resources")

Any capacitive touch sensor can be affected by changing electromagnetic circumstances in the environment (i.e. humidity, relevant bodies nearby, etc.). Because of the heightened capacitive sensitivity programmed (previous point), these environmental circumstances can negatively impact the response of touch events. To mitigate this, I take advantage of the MPR121 reset function, which recalibrates the sensors for the then existing environmental conditions. So the first reset occurs at minute 3 and every 7 minutes thereafter.

After comparing with multimeter readings, the correct battery voltage is achieved applying a correction to the internal pin (A13) reading with this formula:

Available Memory on the MCU

Another option is to change the HUZZAH32's default memory partition, for example, choosing No OTA or Minimal SPIFFS

Releases of Espressif's Arduino Core for ESP32 prior to 2.0 have an issue with I2C. The Arduino IDE will operate with the latest stable version, but take caution that PlatformIO (as of this update) is still using 1.0.6.

These three application notes from Freescale Semiconductor (manufacturer of the MPR121 chip) are the most relevant for this use case.

There is no ESPRESSIF or ADAFRUIT implementation of a BLE Keyboard on ESP32 for Arduino IDE, but T-vK's development is extremely useful and stable

Some of the items I'm exploring to add. 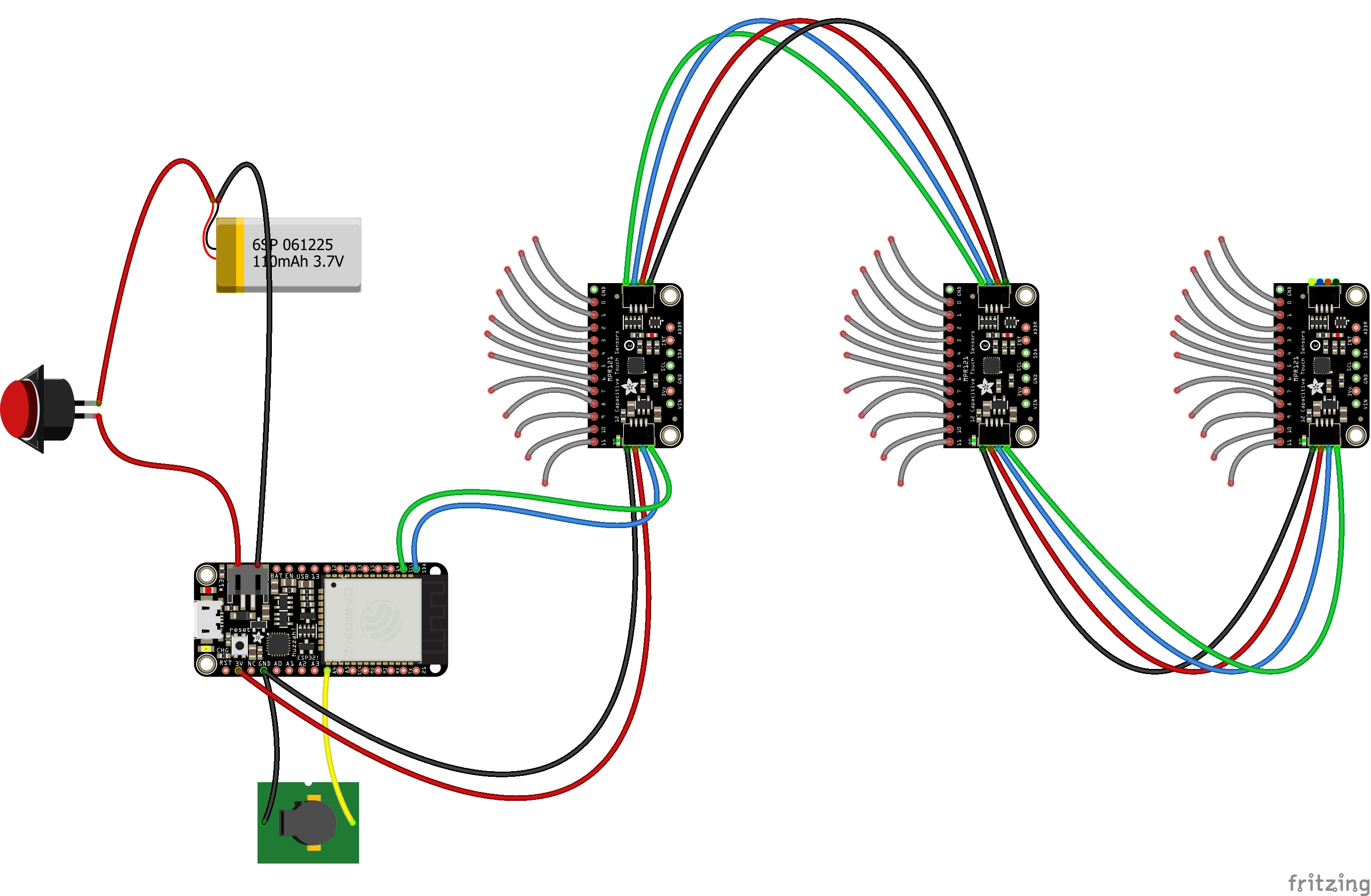