The Patriot Alexa Smart Home Skill and IoT library allow you to voice control your Photon quickly and easily with no Alexa coding at all.

The Patriot Alexa Smart Home Skill and IoT library allow you to voice control your Photon quickly and easily with no Alexa coding at all. 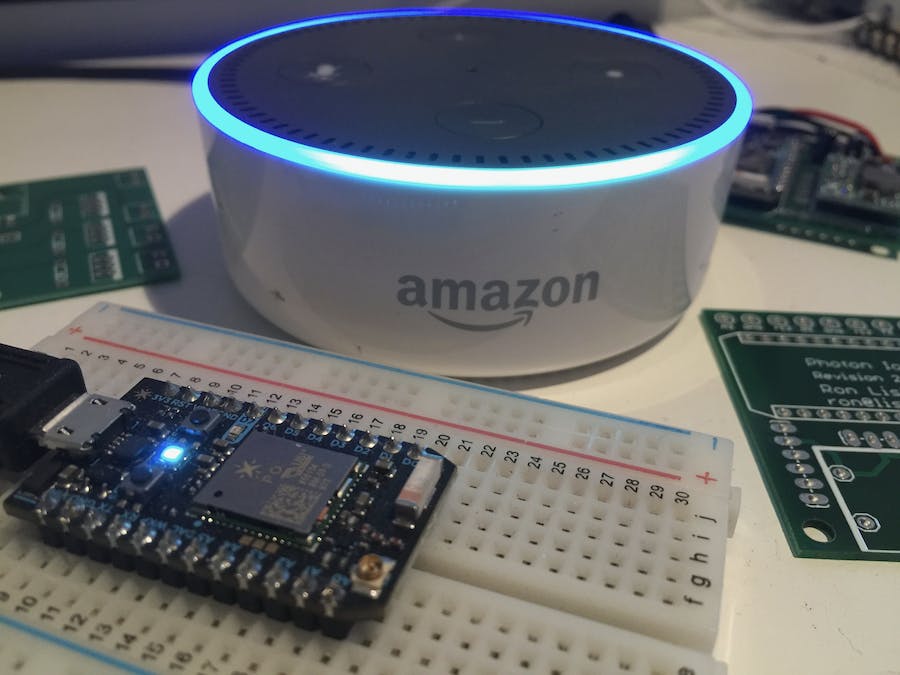 This is a fairly quick project, with a bit of a longer story. If you're anxious to jump into building something, you can skip the story and jump down to the next section below.

Let's begin with a story...

So there I was creating my 5th Photon controlled LED lighting project for my RV. This was getting really fun. I had several Photons controlling lights and fans, and an Alexa skill and iOS apps to control them. To add another device, all I needed to do was:

Being a professional programmer, it bothered me that every time I added another IoT project to my RV I had to repeat these same 4 steps, even if the new project was very similar to one of the others. So I started thinking about how to reorganize my Alexa skill, iOS apps, and Photon sketches to see if I could make this process quicker, easier, and less error prone. It turns out that it can indeed be a lot quicker and easier, as I'll show you in this article.

To start with, I took all the duplicated Photon code and put it into a library that can be used by each new project without any cutting and pasting each time. Then I published this library, named "IoTlib", using Particle's new v2 library format so that it can be used by anyone, using any of the available IDEs: Web, Atom, or CLI.

Next I thought about how to enable the Alexa skill and iOS apps to so that they could automatically detect new devices so that I wouldn’t have to keep updating them in order to support new devices. I realized that each device can expose its name, and the actions it supports, using a particle.io variable. So I updated the IoTlib code to do that, and updated the Alexa smart home skill to automatically "discover" those actions. So now when I add a new Photon device, all I have to do is program it using the features provided by the IoTlib, and within a few minutes I can start controlling it with my Alexa. I can also use the Alexa app tell it to "Discover new devices", and the new device will be discovered right away.

What you will need

This project will show you how you can easily control your Photon device with Alexa using the open source Patriot IoTlib library and the Patriot hobbyist smart home skill.

You will also need an Alexa device (Echo, Tap, or Dot) and a free Amazon account to login to the Alexa app or Alexa website.

So with Photon in hand and powered up, and an Alexa device nearby, let's begin.

If you are already familiar with how to program your Photon, and you know how to install an Alexa skill, here is all you need to know:

That's it. Feel free to explore the other examples in the Github repo, or be adventurous and explore the source. I welcome your feedback.

So with Photon in hand and powered up, and an Alexa device nearby, let's begin.

At this point you can say "Alexa, turn on photon" (or whatever words you used for the device name and/or in the behavior in the sketch) and the blue LED will come on. Say "Alexa, turn off photon" and it will go out..

I encourage you to experiment. Take a look at the other examples on the Github repo. Breadboard additional LED to PWM pins like D0 through D3 and see how the LEDs are slowly turned on and off.

Note that the Alexa app was recently updated (October 2017), and now allows control of smart home devices. So you will have the option of controlling your IoT devices using your Voice with Alexa, or with your phone with the Alexa app, or with another IoT device using for example the PatriotSwitch library.

In future articles I will demonstrate how to use the IoT library to add additional LED lights, switches, temperature sensors, and more.

Note: this article has been updated to reflect the newer version (2.0) of the IoT and plugin libraries. Refer to the code and examples on Github for the latest version numbers and examples.

0 projects • 27 followers
Lives in an RV, and is turning it into an IoT showcase using Alexa, iOS, and particle.io. Professional iOS, Alexa and IoT developer.
ContactContact