An open microbial bioreactor for growing cultures of about 1L.

An open microbial bioreactor for growing cultures of about 1L. 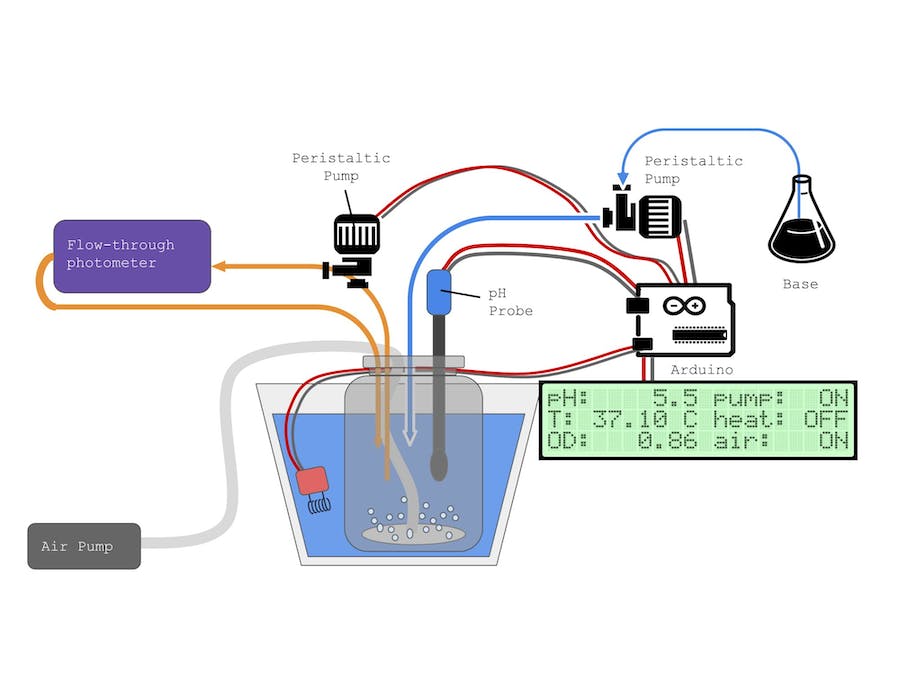 We are building an open source, benchtop, batch bioreactor to optimise yield of enzymes producing recombinant proteins for molecular biology such as Taq polymerase or for cell-free extract production. This built on existing open source projects to further reduce the cost of components and pay particular attention to their global accessibility. By generating a modular design with thorough and useful documentation of different options to suit budget and accuracy requirements, we will make these devices easier to build and maintain for a wider range of users in universities, companies and biomaker spaces: in particular those in resource-constrained contexts.

The problem to be addressed is reliable culturing of bacteria for expressing lab-scale quantities of recombinant bacteria or for making cell-free extracts. Such cultures are known to vary in growth rate and other parameters which affect final yield or viability, so continuous monitoring and optimisation of growth conditions can improve reproducibility and reliability of experiments. Existing commercial solutions are prohibitively expensive for low-resourced labs and do not allow for easy customisation and maintenance. Existing open source designs typically fall into two categories:

The EPFL/Univalle 1 L open source bioreactor is the most suitable starting point but there are several features that the current version is lacking to meet the design goals for our project and at an estimated cost of $1800, there is a need to more than halve the cost of the device to reach a budget of under £500 for the most feature-rich version of our bioreactor.

We will use the workhorse of molecular biology Escherichia coli bacteria. In this project we will eventually be expressing an off-patent Taq polymerase enzyme in an off-patent pTTQ18 vector that is readily available from Addgene. The goal is that the bioreactor is suitable for E. coli expressing other recombinant proteins and for other bacterial and yeast strains with parameter optimisation.

The project was split into different modules to be prototyped, tested and documented:

We selected a readily available glass vessel and a metal lid enabling us to drill holes to attach the tubes and connectors. We investigated possibilities for autoclavable adhesives,3D printing filaments and plastics and connectors to ensure that the unit is fully sterilisable.

We found 2L glass preserving jars that are widely available and can fit metal lids that would be autoclavable. We chose a Le Parfait Orange Top Jar, 2.0L with Familia Wiss lids but any products of similar size and made from glass and metal could be substituted.

We now have a very simple set of connectors but aim to standardise these further and speed up assembly with quick connect couplings in v2. Another improvement could be to design baffles for the vessel. These are panels on the walls of the vessel which are commonly used to prevent a vortex and to improve aeration efficiency

We have tested the pH control system that consists of a traditional pH probe and a peristaltic pump, both controlled by Arduino Uno through XOD software. The peristaltic pump was chosen over the syringe pump because we wanted to reuse it for our optical density sensor.

We started by building an existing pump designed by the Aachen iGEM 2015 team and came across several problems with the existing design. Firstly, the parts that form tubing enclosure, laser-cut from Plexiglas, are positioned in layers, and thus their sharp edges can break the silicone tube. Secondly, the existing enclosure is not easy to assemble, mainly due to the number of parts that need to be arranged on top of each other. This may present a problem because the enclosure has to be (dis)assembled before every run of bioreactor in order to put in new sterile tubing.

We propose an alternative enclosure, which is 3D-printable. It will consist of three parts and will not include layers or sharp edges. A pump with 3D-printed enclosure will not require an additional piece of equipment to make, i.e. the laser-cutter.

Since our bioreactor will at least require one more peristaltic pump (to measure the optic density), we aim to create pump design that can be easily adjusted to a different tubing size. Our pump size parameters can be quickly changed within the code we developed for OpenJSCAD.

You can view instructions for building the pump here: https://www.hackster.io/anna-kuroshenkova/parametric-peristaltic-pump-b78187

This module comprises the development of a flow-through photometer and temperature sensor unit for the determination of culture density and temperature.

The culture is constantly pumped (peristaltic pump) through a glass tube where the OD is constantly measured. The Photometer unit is based on a single module of the test tube photometer.

You can view the instructions for building this module in it's own Hackster project entry.

The device currently uses different boards for each module, we will integrate control systems in the coming months.

The benefits of the project will be increasing capacity in low-resourced contexts for reliably growing microorganisms for local production of enzymes or other proteins and for producing cell-free extracts. This is important i) to increase access to research reagents at lower cost and without reliance on supply chains which may have challenges including shipping times and cold chain; ii) given the growing importance of cell-free extracts for research and education, low-cost diagnostics and more but the documented need to harvest bacteria at an appropriate growth stage to produce extract.