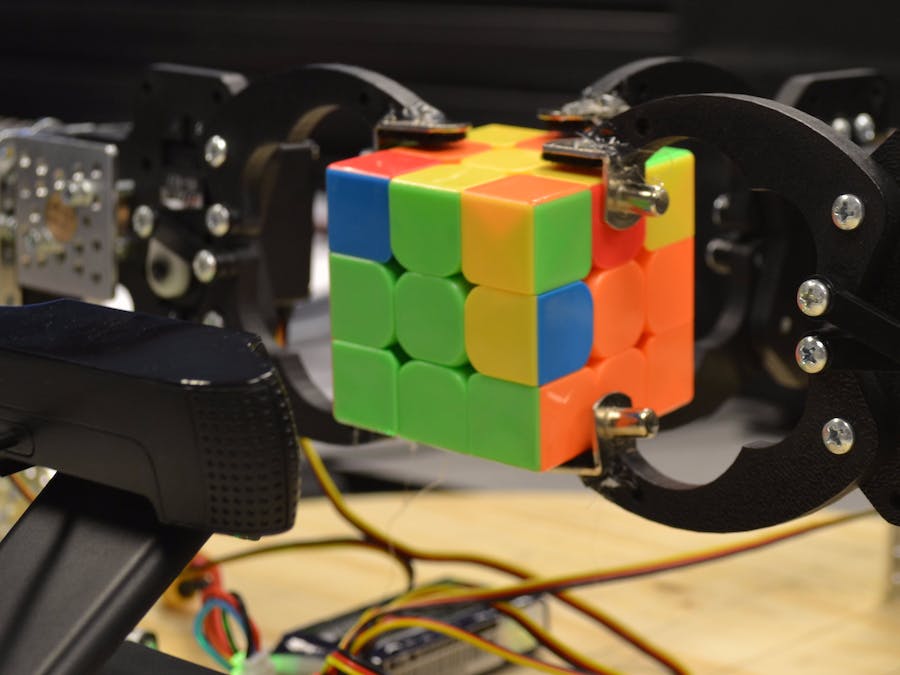 Our team was challenged to build a portable robot to demonstrate that the OSD335x System-In-Package can address the needs of industrial control, automation and robotics applications. For the full story and more information about the design go to our blog:

We chose BeagleBone® Blue from Beagleboard.org since it showcases the industrial robotic control features possible with the OSD335x System-In-Package.

We built three arms to execute all the movements. This also frees up one side of the cube so that a camera can easily capture the images.

Use the Actobotics building system for the arm construction. A wooden dowel added stability to the design.

Use a wooden base board to mount all the arms and the camera at fixed positions. While debugging, use a hot glue gun to experiment with the positioning of the arms.

We chose the Logitech C920 camera to capture and identify the colors on each side of the cube and will use OpenCV for Computer Vision tasks.

The following software packages were utilized in the design. For more information regarding the development of the software and decisions needed, please visit our blog:

Use SD card (> 8GB) for easy porting of demo from one board to another. Make sure the board is connected to the internet for the following instructions.

2. Re-install robotics cape library with a change in libraries/other/rc_pru.c

Run the code to solve the cube"

We hope you enjoyed building this Rubik's cube solving demo as much as we did in the lab at Octavo Systems.

The updated version of Rubik's cube solver code can be found in the attachments. It has the following additional functionlities:

Contact us to solve the puzzles in your Industrial Control Systems designs.

6 projects • 5 followers
Electrical Engineer by profession but love physics in general. I like to build stuff. Have been building electro-mechanical systems from 15y
ContactContact