FInd ants with a camera, track them and zap them with a laser.

How to Bug a Bug

How to Bug a Bug

FInd ants with a camera, track them and zap them with a laser. 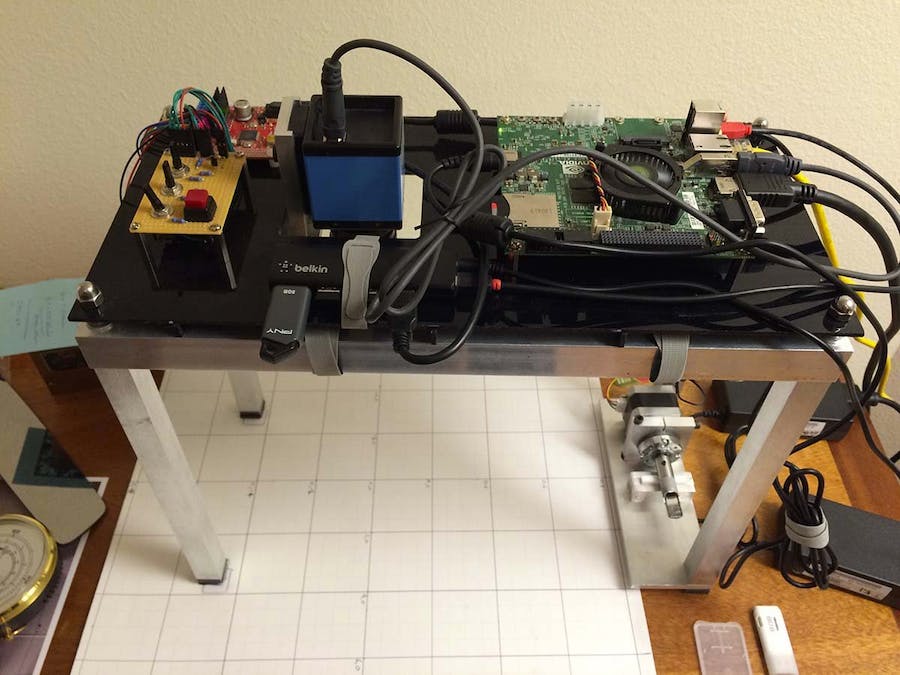 How To Bug A Bug

This project shows how to recognize ants with a camera, track them and zap them with a laser.

When I planned this project I considered buying a high-powered laser on EBay but the thought of my grandkids wearing safety glasses made me reconsider. No ants have been fried: the laser is just a 5mw laser diode like the ones in low-power laser pointers. Here are the initial questions and the current answers:

You can click on any of the images to see a bigger version. The project was not even practical before I got my hands on an Nvidia Jetson TK1 Developer Kit. Who wants to run a big, noisy PC for a project like this? The Jetson with its embedded gaming oriented GPU (graphics processing unit) has all the power you need for under $200.00. The other main components are a camera, a couple of mirrors, a couple of stepper motors, and a USB controlled stepper motor driver. I happened to have a nice USB camera that I use to take pictures of the sun, so it was pretty cheap to give it a try.

In the picture you can see the top of the unit. I bought the EIbotBoard from SparkFun but it looks like they have discontinued it. I did find a board that looks equivalent at Evil Mad Scientist The board is perfect for this project. It will simultaneously drive two steppers at about an amp apiece. It is powered by 12 volts and plugs into a USB port. It looks like an async serial port to Linux.

The board on the top left is a debug aid. The red button gracefully resets the unit. The toggle switch on the left turns the laser on and off manually. Normally the laser is under computer control. The other two switches can be used to drive the x and y stepper motors. The switches and the laser are connected to pins on the EIBotBoard and can be read (the switches) or written (the laser) via serial commands over the USB.

The camera is a DMK 41 industrial camera. It runs at 15 frames per second over USB and has a generous 1280x960 grey-scale frame. I had to talk OpenCV (see below) into accepting the camera's format tag but that's all it took to make it work with the Jetson. The lens is a 4mm - 12mm Tamron zoom lens. In the video at the top of the page it is set to about 8.8mm giving a field of view of about 7 x 9.3 inches. The camera is connected to the Jetson's mini B USB port.

On the left of the picture is a powered USB hub. It is connected to the other USB port on the Jetson and to a wireless keyboard, a wireless mouse, the EIbotBoard and usually a thumb drive for backup.

The laser is mounted in the small aluminum housing in the photo, attached with a camera swivel mounting to the frame. The Y axis stepper motor and the small mirror on the end of its shaft can be seen at the bottom of the photo. The X axis is the long thin mirror mounted under the circuit boards.

Light bounces from the laser to the Y axis to the X axis to the ant. The 200 steps per revolution motors have 5.2:1 reduction planetary gearheads. The EIBotBoard runs 16x microstepping so we have roughly millimeter resolution over most of the field of view of the camera. The gearheads add backlash that is hard to model; that seems to be the main source of errors positioning the laser.

The Jetson is shipped with Nvidia's L4T Ubuntu distribution. That proved to be a great platform for the project. Python is used for the motor control - it's easy to write and the timing is not critical. The image processing code was written in C++ using the OpenCV libraries. The libraries support Nvidia's GPU and the speedup made frame-rate image processing feasible. The camera frame processing is all done by the GPU. Once a candidate image is isolated, a neural network implemented in Caffe is used to classify an image, again by the GPU, into one of three classes - an ant, the laser or a background image.

The CPU produces a list of isolated blobs of pixels from the foreground mask. The camera image for each blob is passed to Caffe for classification. Each blob gets a score that says how likely it is to be an ant. Blobs that may be ants are passed to a class that maintains the current list of ants. Blobs that are in a position near the predicted position for the ant are "claimed" by the ant. Blobs that look like ants but don't match up with a current ant cause a new ant to be created. Ants that haven't matched up with a blob for a while are eventually removed.

The "best" ant is picked based on the total score and the distance from current laser position. The time to move the laser to the ant is estimated, and then the position of the ant at that time is estimated to provide a new estimated position. Then the motors are started. Once the motors finish the laser is fired for one frame time. Ant positions are tracked while the motors move.

I first wrote an ad-hoc algorithm to recognize the ants. It took into account the distance of he ants from the camera, the number of pixels set, the aspect ratio, and the average color of the pixels. It was easy to tune it to recognize one setup, but as soon as things changed the algorithm had to be retuned. So I turned to a neural net to recognize the ants. I used the ad-hoc algorithm to pick the ants and laser images out of movie. I added some background images selected from positions that ants had once occupied. That produced about 3500 28x28 pixel images that I checked by hand to make sure the ad-hoc code had not misclassified anything. I fed the images to the Caffe MNIST network trainer. Training took about 30 minutes on the Jetson.

The trained model was used as a classifier in the main project. It takes about 8 ms to classify an image. This is OK for a few ants. Given the simple nature of the images, network tuning should reduce these times. The nice thing about using a neural net is that new setups can be added to the set of images and the network can be retrained. Over time this will produce a general model.

The mapping from C2 to C3 involves a 180 degree rotation about the C2 center and calculating the rotation angles for the mirrors. Mathematica also helped with solving the equations for the mirror angles given an x and y coordinate on the C3 z = 0 plane.