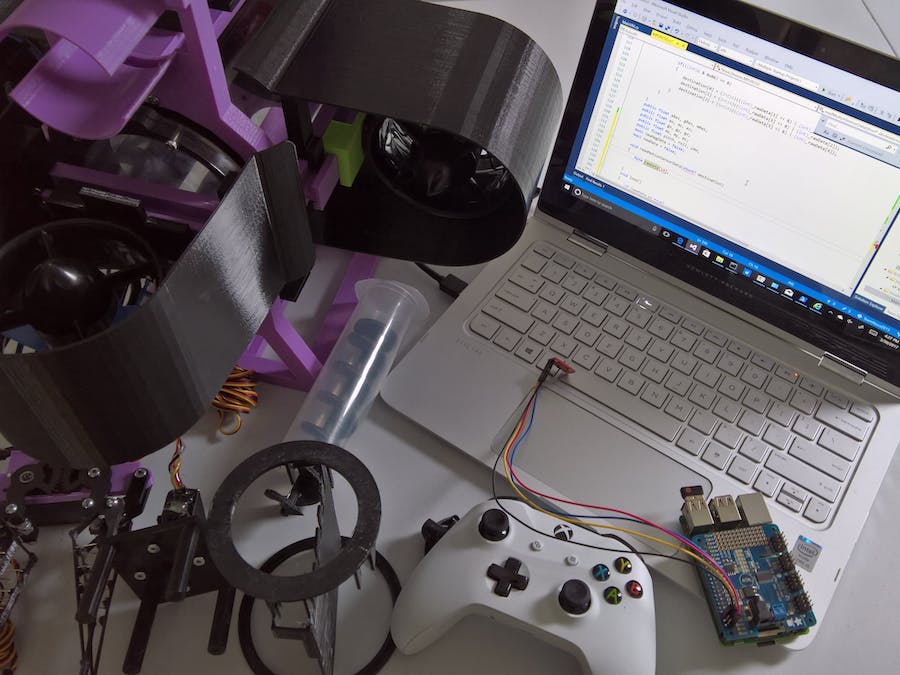 Thanks for everyone who voted for us in the first Windows Developer awards in the Core Maker of the Year category.  Voting has now closed and we are waiting for the results.

Nova Underwater Technologies (a team of 15-18 year-old high-school students in Halifax, Nova Scotia, Canada), hosted by Halifax Robotics, is creating an Underwater Water ROV (remotely operated vehicle) for its 2017 entry into the MATE competition in the Ranger class.

It's an underwater robot running on Windows 10 IoT Core controlling thrusters, cameras, and articulators with an Xbox controller!

Nova Underwater Technologies is the name of the students' team competing at the RANGER class, and also the name of their fictional company which, as part of participating in the MATE competition, responds to the fictional Request for Proposal (RFP) issued by MATE, asking teams to build robots to perform various underwater tasks.  In addition, teams must create a technical report, produce marketing materials for the robot product and make a business pitch presentation.  This involves building skills in the areas of business, design and fields of engineering including software, hardware, mechanical, structural, marine, electrical and electronics.

The team almost couldn't compete this year because it was previously hosted by a high school where a teachers' dispute shut down all extra-curricular teams and facilities for 2+ months.   To enable the students to keep learning and compete this year, Halifax Robotics was formed as a non-profit by the team's industry mentor (sponsored by Ace of Clouds, Inc, as well as other community sponsors) to host the team and provide the necessary facilities.

This year's robot consists of a custom-design 3D-printed frame with an electronics core at the centre and custom-designed articulators attached to the frame.

The electronics core includes a Raspberry PI 3 running Windows 10 IoT Core (with a custom UWP C# background task app) connected to motor controllers, servos and sensors.  There is also a network switch in the core which services the Raspberry PI 3 and cameras.  The robot is controlled via a power/network tether which runs through and out of the water to a control station on the surface.  The control station consists of a 12V/30A power supply and a laptop running Windows 10 (with a custom UWP application built up over the last 3 years) controlled by an Xbox Wireless controller.

Unlike many other robot projects, this one has to operate down to 4m under water.  Most basic waterproof components only work down to 1m.  It takes hours to seal in and test all the connections.

Breath-holding moment as cables are cut shorter prior to sealing

The robot has been successfully tested for water-seals and motion-control, in the team's test tank and in the Canada Games Centre.

Using the same custom-design twist-lock mounts, the robot also has 4 custom designed articulators that enable objects in the water to be manipulated.

One of the custom-design software-controlled ariculators - a spinning claw

The robot is currently having articulators and cameras attached, as well as having it's frame updated to the latest design, ready for the regional competition activities taking place from Sat Apr 29 to Thu May 4 2017.

For practicing, the team also had to put together PVC props which the robot must manipulate as part of the competition production demonstration tasks.

If the team wins the regional competition, and goes on to the international finals (Jun 23-25 in California), they have pledged to open source the robot frame models and code for other teams to use - a rising tide lifts all ships!

1 project • 5 followers
A new robotics club for students in Halifax, Nova Scotia, currently building underwater ROVs for the MATE competition.
ContactContact
Thanks to Halifax Robotics and Ace of Clouds, Inc..