The theme: PIRATES!! ARRR!!!!!! So of course we needed a pirate ship and sea monster.

Kraken Tentacles and a Ship for Them to Destroy!!!

Kraken Tentacles and a Ship for Them to Destroy!!!

The theme: PIRATES!! ARRR!!!!!! So of course we needed a pirate ship and sea monster. 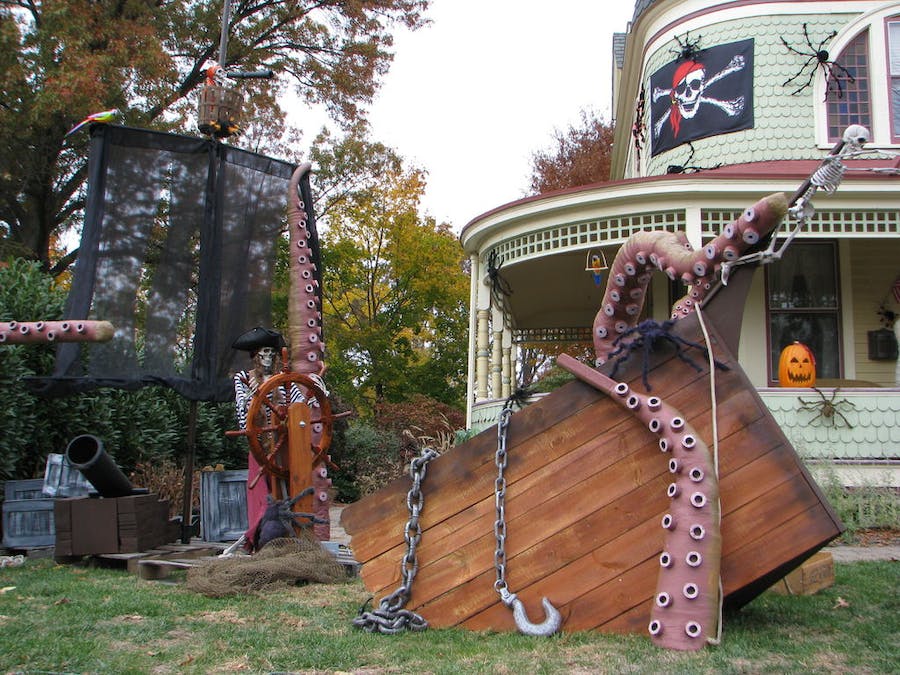 Halloween is awesome. Last year we had over 1300 trick or treaters from 3pm-9pm (town curfew). Last years theme: PIRATES!! ARRR!!!!!! So of course we needed a pirate ship and sea monster. Enjoy and please remember to vote if you like our project. Thanks

One of our local businesses was completely gutting their building during a remodel and were probably very surprised when we stopped by and asked if we could take stuff from their junk pile. The old air conditioning ducts had all been removed and as soon as we saw them we knew they would be perfect for the kraken tentacles. We covered as much of the exposed insulation as possible before we moved them.

Each duct had a 1 inch PVC pipe shoved into one end to give some support as well as a twisting/moving look. The PVC had been pre-bent with a propane torch so the tentacles were not all standing straight up. Pool noodles, corrugated drain pipe, copper wire and lots of tape(whatever kind we had extra of) was used to extend the tentacles that needed some extra length.

the first couple coats of paint was done with a concrete stain that actually worked really well. It did not flake off and covered nicely. Stella is working hard guarding the tentacles as they dry. while the paint was drying we were cutting out suckers. the white circles were foam tubes and pool noodles that had been sliced about an inch thick and given some white paint. After doing this, if I had to do it again I would definitely use a hot knife or a band saw instead of a hand saw but I didn't have either accessible at the time. Wear a Mask!!! Foam gets everywhere.

Step 4: A Forgotten Step and a Redo

we originally attached the suckers without painting the underside of the tentacle with the pinkish/burgandyish paint. fortunately we only did one so removing them and replacing with smaller suckers was not such a big deal. Originally we wanted to step down the size of the suckers from the base to the tip of the tentacle but the larger suckers were very flakey and not as easy to work with as the pool noodles so we scrapped them. Some nice dark pink underside paint and suckers attached with Tacky glue spray and we were back on track. A note on the glue; use something better than spray glue, it held through Halloween but as soon as the colder weather showed up and we tried to store the tentacles and they were bumping each other the suckers started falling off in greater numbers than I would want to have to reattach.

Step 5: A Ship on the Horizon

The Ship was pretty much built in place a week before Halloween and was made a simply as possible. Two cheap preassembled fence pieces were purchased at Home Depot and cut on an angle to match. The straight (bottom) sides were attached together with two hinges so they folded open and closed and a stabilizing triangle cut piece of plywood was added to secure the pieces open. Stain was applied to give it a darker look and some weathered details were painted on. Pallets, gotten for free from local hardware stores were laid behind to simulate the broken deck of the ship and a mast made from PVC pipe, an apple basket and old curtains(originally we used white but then replaced with black sheers) and was secured with rebar. The whole ship took less than 6 hours. The ships wheel was a separate project which unfortunately was not well documented during building, and was secured in place on halloween.

On Halloween day we go into crazy setup mode and all the things that can't be left out over night or in uncertain weather all have to be put out by 3 pm which is when the parade in our town starts, we start getting the littlest kids at that time who don't walk in the parade for whatever reason. Stella was not thrilled. The tentacles were arranged around the ship and next to the porch, they were decently secured with the rebar and we had fabulous weather so wind was not an issue, if it had been windy we might have had to find a way to better secure them. The captain was placed with the ship's wheel and odds and ends were added to finalize the scene. Stella dutifully manned her greeting post and once the light was low enough we turned on our water light. It was awesome. If you would like to see more picture please visit http://mapleavehalloween.weebly.com