A simple device that reflashes a bootloader via SWD on bricked SAM D21 boards (e.g. due to incorrect BOSSA settings).

A simple device that reflashes a bootloader via SWD on bricked SAM D21 boards (e.g. due to incorrect BOSSA settings). 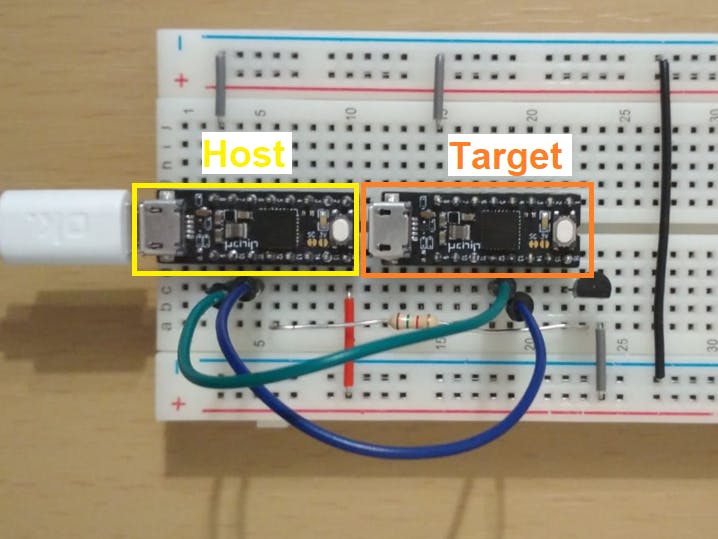 Well, it happens... you use BOSSA or other tools to upload a new program, or to update the bootloader (e.g. for CircuitPython) and something goes wrong... maybe a wrong setting, or a wrong option (in particular, the dangerous "erase all"!), or even a power failure during the upload and... damn it, the board is now bricked!

Bossa is an extremely powerful tool. However its wrong usage might lead to a bricked device!

What to do now?

This project aims restore the bootloader on SAM D21 boards (uChip, Arduino Zero, Feather M0, etc.), but with small modifications it can be adapted to other kinds of target boards that use SWD (serial wire debug).

For this project, we used uChip as host, which has the advantage of being extremely compact, allowing also to directly power the target board to be restored. Furthermore, in this example, we use the uChip bootloader, to restore bricked uChip boards. If you need to unbrick other boards (e.g. Arduino Zero) you must follow the procedure to include the correct bootloader (see below).

The source uses the Adafruit DAP library, which, in turn, is based on Alex Taradovs Free-DAP. Kudos to them! Please read the copyright notice on the source!

The hardware is extremely simple. The uChip drives a PNP BJT (you can of course use a pMOSFET) to power on/off the bricked board. During power-on, the SWCLK line is held low, so that the SAM D21 will wake up in debug mode.

Well, that couldn't be any simpler! Power is provided by the USB port of the HOST uChip

Here is the project mounted on a breadboard. Of course, you can use a perfboard/PCB with some fancy ZIF socket if you want :)

Connect to the bricked boards the lines marked as SWDIO, SWCLK, VDD and GND. In the figure above, we used uChip, therefore the pins are pin 12, 13, 16 and 8, respectively. For other boards, refer to you board's datasheet to determine where those signals are routed!

To power the system, just connect the HOST (working) uChip to an USB port, through a micro USB cable.

The software: how to unbrick another uChip board

If you just need to unbrick another uChip board, just upload the sketch on the host uChip (the good one). Use the serial monitor to start the program. If the unbrick procedure is successful, you should see something like below:

The software: unbrick another SAM D21 board

In this case, additional steps are required.

Now your unbricker is ready for the Feather M0!

If you simply want a standalone unbricker (i.e. you do not want to open every time a serial monitor), you can comment out or delete the line: "#define WAIT_FOR_SERIAL_MONITOR".

Warning, if you comment or delete that line, you'll probably won't be able to see any message from the serial output, as the program will not wait for the serial monitor to open and it will be too fast.

There is a lot of room for improvement. For instance you might add 3 LEDs, red, yellow, green, to notify the status: fail, under process, pass, respectively.

You also might want to turn off the target board if you need to unbrick a lot of devices, so you can leave the host uChip powered on, and safely connect/disconnect the target board after it has been successfully unbricked.To do this add at the end of the loop function: digitalWrite(PWR,HIGH);

Furthermore, you could connect an LED (of course in series to a current limiting resistor) from VDD to GND. This will tell you when the target board is actually powered on. Furthermore if you really screwed up your board (e.g. you fried them by feeding the 230V AC mains...), a series fuse should be placed between the collector of Q1 and the VDD line of the target board.

As a last remark, this tool can unbrick the boards in which the problem is just a corrupted firmware: it cannot do miracles, so if you fried your board, well, there is nothing you can do! 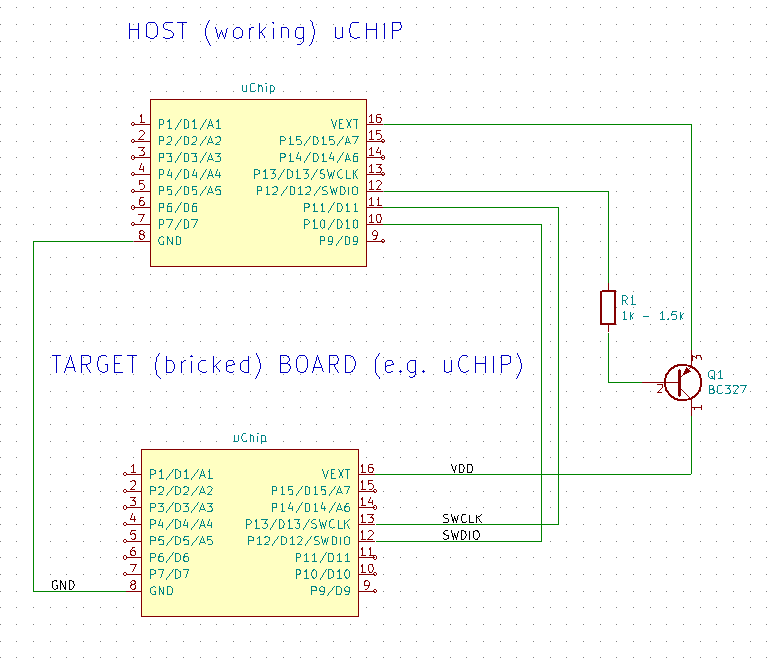 3 projects • 2 followers
I was born, then I got my master, a PhD. I forgot about all what's in between.
ContactContact