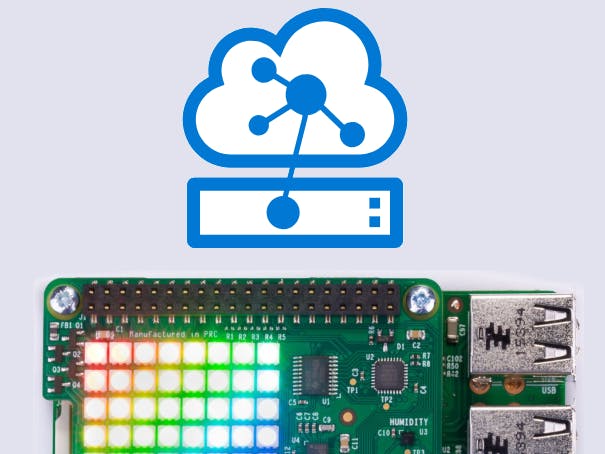 As this project uses Microsoft Azure components it is required that you have an Azure subscription. Although Azure IoT Edge is open source it is a much complete experience if you can see with your own eyes what is possible to do from the cloud. If you do not yet have a subscription in Azure you can create a free account and have $200 credits to use for 12 months.

Sense HAT is used as the sensor board in this project because of its ease of use and official python library. Any other sensor extension board might or might not work. But make sure they have a python library before you chose anything else.

And be very sure you have an officially supported adapter as the new model of Raspberry Pi with a Sense HAT on it consumes more power than many USB power adapters support.

Sense HAT on the Pi with enclosure

Now we have all the hardware and software in place and ready to start.

Many of the installations we are making on the Raspberry Pi will be done remotely. I am using Putty as the ssh utility to connect to the Raspberry Pi shell. For this to work you would need to enable remote connectivity on the Pi. You can do that by opening a terminal window and running the config utility using the command:

Then select interfacing options → ssh to enable it.

When you have the terminal already open you can issue the ifconfig command to see the ip address of the Pi.

We will connect to this ip address in Putty to connect to the Pi. You can always issue the same commands on the Pi terminal as well. If you have not changed the default password you can use pias the login name and raspberry as the password.

IoT Edge runtime, we will be installing on Raspberry Pi, will communicate to an IoT Hub in Azure. This IoT Hub needs to be created and initialized in Azure platform as well as other resources we will use in this project. It is possible to create these resources on the Azure portal or through command line tool package, Azure CLI, provided by Microsoft. Here we will use Azure CLI for this purpose. It is even possible to run Azure CLI commands in the Azure Cloud Shell. In this project we will use Windows PowerShell on a Windows development computer but Azure CLI works even on macOS and Linux.

1. Begin by installing the IoT extensions to Azure CLI

2. You need to login to your Azure subscription before going forward. You can do that on the command shell using the following command. It will ask you to open a browser and enter the provided code to login. It will even output the list of subscriptions you have after successful login.

4. Create a resource group in Azure to put all resource you will create into. Here I have used the IoTEdgeResource as resource group name and northeurope as data center location. You may pick anything that you like.

5. Create a new IoT Hub in the resource group. Note that the hub name should be unique in all Azure. I am using IoTEdgeHubHelloWorld in this example (which you can no longer use as this name is occupied by me now.) And the pricing and scale tier I have selected for the hub is S1 Standard. You can select F1 for a free tier but you may have at most one free tier IoT Hub per subscription.

6. Create a new edge enabled device to the newly created IoT Hub. The name I am giving to the device is myEdgeDevice

7. Retrieve the connection string for the device which we will use later on.

Copy the connection string part from the output of the previous command to be used later on.

7. Setup the device to connect to the right IOT Hub. Open the configuration file using nano editor on the Pi.

Save and exit using Ctrl-X,Y,Enter.

8. Restart the iot edge runtime for the changes to take affect. The runtime will be started automatically if you restart your PI for any reason.

And you can at anytime list the modules running in IOT Edge and see their status.

As we have not installed any additional modules yet so the list will be quite short at this moment. Only edgeAgent is available.

And to see the status of the IOT Edge runtime environment as a whole you can use another command.

This command will show you current status, the CPU time in total and the time the daemon was last restarted.

We will add a new Python based module in the IoT Edge Runtime that communicates with the Sense HAT. For this purpose we need to develop a custom module using Visual Studio Code.

1. Be sure that you have prepared your development environment before beginning this section.

2. Run the install command for cookiecutter for python which is used to install IOT Edge solution templates in Visual Studio Code. This command can either be run in command shell of your development machine or VS Code integrated terminal which you can access on menu View → Terminal.

3. Using these development tools we will create a container image to communicate with Sense HAT from IoT Edge runtime. The runtime on Raspberry Pi will get this image from a container repository which we will create just for the purpose of this project. We will use Azure Container Registry. There are of course other repositories out there where you can check in your container images for public access like Docker Hub.

The command below will create such a repository for us named sensehatContainerRegistry. Registry name should be unique in all Azure so you would need to pick another one.

3. You can retrieve the credentials for the admin user by issuing the following commands. Save these in a secure place as you will need them later on to connect to the registry.

You can issue commands inside VS Code by either the menu View → Command Palette or by simply pressing F1. Pick the command Azure: Sign In and follow the instructions.

3. Another command we need to use is Azure IoT Hub: Select IoT Hub. This will fetch the IoT edge device we have registered on the IoT Hub and show the status of the modules running on the IoT Edge Runtime. We will even be able to get status updates, monitor the device and push new modules from inside the VS Code. After issuing the command in Command Palette you need to select the subscription you used to create the IoT hub and then select the specific IoT Hub.

4. To check if the container registry credentials are correctly provided by VS Code open the .env file and check that username and password fields are filled in.

5. Add the following import statements at the top of the main.py file.

6. Add a new counter for sense hat measurements in global counters section in the same file.

7. Add the following python function after the declarations which reads Sense HAT sensors and sends a message to the output named output2.

8. Add the following line of code in the main function of HubManager class inside the while loop. Together with the sleep statement that was already in there this will cause the Sense HAT measurements to be sent to the output2 almost every second.

9. Now open the deployment.template.json file and locate SenseHatPythonModule. We will add a new create option to give this module privileged rights when running in the runtime container to access the hardware of Pi. Change the createOptions part as below.

10. The default configuration for the template project creates images for amd64 architecture. But the PI has arm architecture. We need to change this default setting. In deployment.template.json file locate the SenseHatPythonModule and change the image setting as follows.

11. Communication with SenseHat requires its own libraries from python code. We can include them in the container image using the Dockerfile.arm32v7. Open that file in VS Code and add the following line of code inside the first RUN command.

The new RUN part of the script looks like this

12. Docker creates a user to run the container as. This prevents the privileged rights to be given to the module. We can change this behavior by commenting out the following lines in Dockerfile.arm32v7.

14. In VS Code right click the deployment.template.json file and select Build And Push IoT Edge Solution

15. The next step is to deploy the changes on to the Raspberry Pi. Right click your device in VS Code Azure IOT Hub Devices list and select Create Deployment For Single Device. You need to locate the deployment.json file created in the previous step located under config folder. Note that this file might have different names depending on the installation version.

Each time you change the contents of the project it is good practice to change the version of the container in module.json file to better observe when the changes are deployed on the device during the development phase.

16. When the deployment finishes you can see the messages sent to the IoT Hub in VS Code by right clicking on the edge device under Azure IoT Hub Devices explorer window and selecting the Start Monitoring D2C Message command.