Smart Farm on a Stick

Smart Farm on a Stick 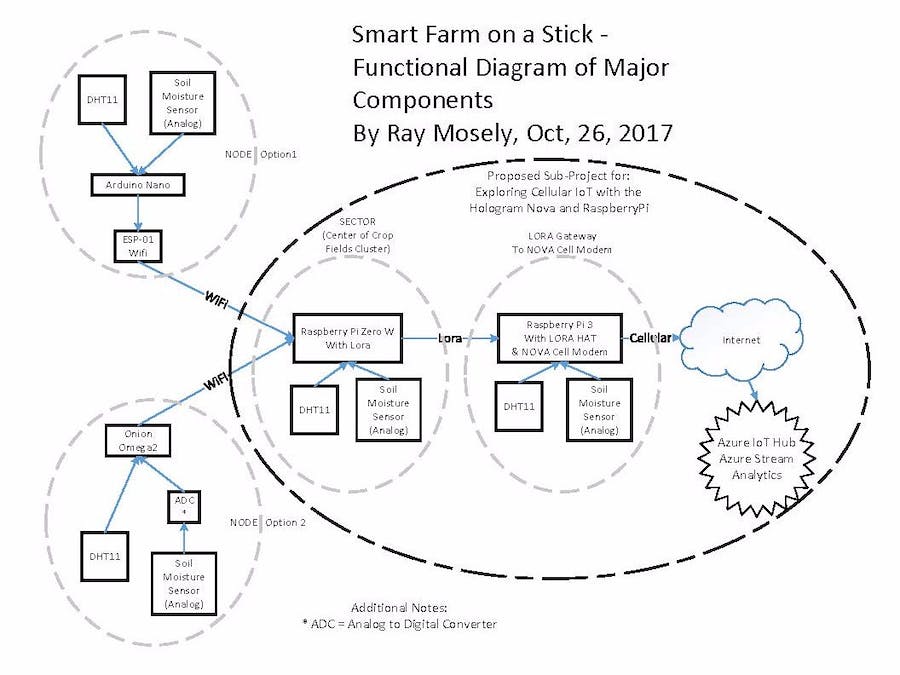 The idea proposed is to create an inexpensive sensor ecosystem to monitor crop soil and weather conditions. This has a target audience of farmers in third world countries. The system is called Smart Farm on a Stick. It will be supplied through non-governmental organizations with modules in small boxes. The modules can then be mounted on a stick, of the farmer’s choosing, in the crop plot or field.

A significant problem for farmers in nations such as Haiti is water. The ability to monitor soil moisture, air temperature and relative humidity would give greater control over the use of the scarce resource water, particularly where it needs to be hauled to a field to water the crops. A second issue is cost of monitoring systems. Another important issue has arisen lately in some Caribbean countries, which is communications. Many systems have been damaged by hurricanes, yet cell phone service can be re-established with drones and balloons carrying cellular network equipment.

There are non-governmental organizations which provide agricultural advice. This includes information on appropriate crops (e.g. sweet potatoes), crop rotation, plant propagation techniques, etc. Education of the native populations is vital to improving living conditions, but no amount of book learning can inform a farmer when to water his crops. Changing temperature and humidity conditions can lead to arid plots, or possible less need for water in cooler times. The ability to keep track of the conditions in the field can lead to greater work to yield ratios.

This project is a synthesis of typical smart gardening technologies that have been showing up on the Internet. There are two innovative characteristics that set this apart. First, this is based on readily available and very inexpensive parts. Secondly, this project included the use of LoRa and cellular network connectivity.

The two diagrams show the essence of the project. The farming territory is divided into three area, nodes, sectors, and gateways. A node is a crop plot that is monitored by one Smart Farm on a Stick. Nodes report sensor data back to a Sector communication device over WiFi. The Sector device relays the data using LoRa to a LoRa Internet Gateway. The gateway relays data to an IoT hub using a cellular modem.

The sector device will be a Raspberry PI Zero W with a LoRa transceiver. It will receive and relay the WiFi data from the node and pass the data on to the gateway. In addition, the RPi Zero can be optionally attached to sensors similar to those used in the nodes.

The LoRa data will be relayed to an Internet Gateway. LoRa is chosen for this project so that the gateway can be at a greater distance from the nodes and sectors, and potentially serve as a gateway for an entire village or farming community. The gateway will pass on the data to the Internet over a Hologram Nova cell modem where it will be sent to an IoT hub. The current specification calls for using the Azure IoT Hub for this, along with Azure Analytics.

The analytics are expected to be simple visualization of streaming and historical crop field data. This can later be expanded to include weather forecasts from a source such as Weather Underground for predictive visualization.

The pilot implementation of this project, using a Raspberry PI Zero W and a Hologram Nova, will be created using the sector and gateway parts of the monitoring ecosystem. The node part will be implemented later. The sector part will have the optional sensors added in, so that data flow to the IoT hub can be tested. The data will be accumulated at the IoT hub and a brief and simple analysis will be performed so that real-time and historical visualization can be achieved. The visualization will be available for use on a computer connected to the Internet and also for use on a mobile phone connected to the cellular network.