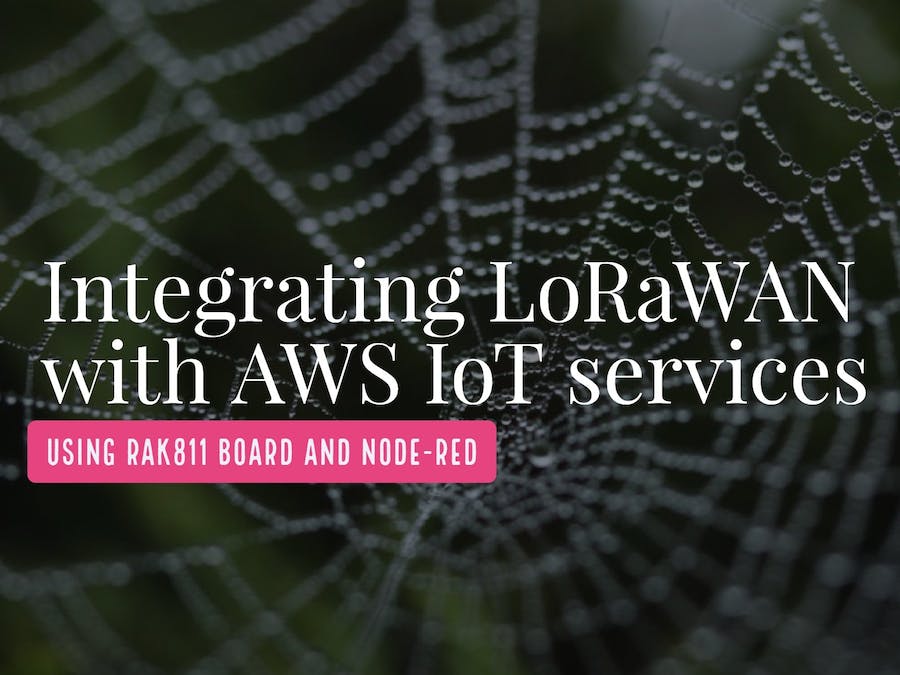 A lot of buzz has been spurred around the usefulness of the LoRaWAN network and how it is going to change the way IoT device talk over long distances for relaying information. Rightly so, the LoRaWAN technology promises both efficiency and long range making it one of the most sought after wireless tech stack in the field of IoT currently.

We have also already seen a lot of projects that use the venerable TTN network to send and receive LoRaWAN packets using their awesome application and network server infrastructure. Our tutorial will further augment this awesome platform by introducing AWS IoT integration for the LoRaWAN nodes and provide a application interface for developers to provide provisioning and analytics services on top of the TTN API by creating a virtual node for all their end points.

We have already seen how our wifi boards (esp32, rtl8711 rtl8195) based boards can be made to talk to the AWS IoT APIs (https://www.hackster.io/naresh-krish/aws-iot-integration-with-rak-creator-pro-board-8ff2e9 )

The tutorial would expect the readers to go through the setup of node red and AWS IoT account before proceeding with the setup.

For this tutorial I will be covering the RAK wireless gateway and LoRaWAN node, namely the RAK831 and the RAK 811. Both the gateway and node will be talking over the 868 mhz bands. However RAK also provides the 915 mhz band based boards for developers in countries like Australia. Be sure to check out their stores for more information.

The Rak 831 is the LoRaWAN gateway which works with a raspberrypi and wifi as the data backhaul.

The RAK 811 is the LoRaWAN node that can connect to sensors and other Arduino style boards for relaying data. It supports a wide array of AT commands for data transmission and also supports both 5v and 3.3v TTL logic for communication, making it quite a versatile board for makers.

These two tutorials should get your setup up and running in no time. I keep them updated for any chnages to the driver setup and hence developers hsould be able to replicate the setup with ease.

Lets see how LoraWAN can talk to AWS IoT Services. The AWS IoT services is a collection of cloud services offered by Amazon for provisioning and maintaing data collected from IoT objects. These can be anything from wifi board, to LoraWAN sensor nodes to industrial sensors etc. The AWS IoT services provide a means to store the state of your things as virtual objects called Shadows. Shadows can have attributes which have a one -to -one mapping with the sensors reading on the nodes or other configuration parameters on the board.

To read/write to these attributes, AWS IoT provides two ways to achieve the updates, MQTT and HTTPS. However both need the devices to send the data via wifi over TCP IP. LoraWAN nodes, however, connect to the gateways via LoRA radio and hence need a platform for converting the gateway wifi payload to a meaning full payload and store the data. This is where the TTN networks awesome infrastructure comes into picture.

TTN provides a application and network server infrastructure for LoraWAN nodes to register to and then send/receive uplink/downlink information.

I have provided a more in depth look at this architecture in the tutorial for RAK811 here:

So now we can see the beauty of the TTN network architecture; the LoraWAN node data is now available for us to manipulate via a cloud service. ALso the TTN MQTT APIs also provide a means to get callback messages wherever an uplink or downlink message is sent fto/from the gateways that we have setup. This MQTT API is the connecting link that we will use in the tutorial to trigger some of our workflows to store the information in AWS IoT things attributes.

BUT HOW DO WE MAKE SURE TTN M<QTT PAYLOAD FOR UPLINK AND DNOWLING MESSAGES REACH AWS IoT SERVICES ????

Node-red to the rescue

We have already seen the awesome stuff that we can do with Node-red and some of the cool workflows modules that we have used to connect various sensors to workflow triggers. So in essence you can create a wifi doorbell, that send you an SMS about the identity of the person at your door by sending their pics to a image recognition service....COOOOOLLLLLLL !!!!

Anyways back to the issue at hand. So we know node-red has a node for AWS IoT shadow updates and a node for TTN node uplink/downlink messages. lets connect the two together shall we :)

Architecture of our project on a high level

Usually when you send message from a LoRA object you will only send some limited bytes. TTN payload decoder service can help you decode this information and store it in a meaningful way:

On how to use the payload functionality, Check out this excellent example provided by TTN:

1) Make sure both the RAK831 and RAK811 show up in the TTN console under gateways and devices respectively.

3) Make sure that the region you provide in the TTN node config is the same as the Handler region of the device (asia, or eu, or us etc)

4) Configure the rak811 node to connect to the same app key as you input in the node-red TTN node config.

Once installed the nodes will show up like so

Lets go ahead and add a input AWS MQTT node like so:

MQTT input node. Connects to a broker and subscribes to the specified topic. The topic may contain MQTT wildcards.

msg.payload is usually a string, but can also be a binary buffer.

Remember we had downloaded the certificates from AWS when creating the TLS certificates for our Thing. Lets copy those files to a location say /root/.awscerts

Once the files are copied, you need to rename them to match the format needed by the AWS IoT Node Red node. The node expects the files to be named as follows:

Where YourUniqueClientIdentifier is the AWS thing name what you put when creating your thing. You can refer to the other tab that you have open.

Now you will return to the previous menu. Here you need to listen to a particular Shadow service MQTT topic called update/accepted.

Now Your node should show connected and start getting messages. Now try tp send an update to the update topic as we had programmed in the RAK473 board. A consequent /update/accepted will shows up in node red and you can now parse the MQTT json data and trigger further jobs. For example, here we try to parse the incoming data and send it to twitter

We can also send the data to an influx db backend for storage and analysis:

Connect the TTN and AWS Services together.

Let the magic happen. Connect the two service together as shows. Please see that there is a fucntion node betwen the TTN output and the AWS IoT input so that we can parse TTN notification output and then send only the relevant information to AWS IoT as required by the AWS services.

Lets see what we need to do in the function node. The TTN node is essential a MQTT node subscribed to the action that we mentioned in the node. SO lets subscribe to a node message receive event. Once you change the action in the TTN node to 'up' events you will essentially subscribe to a topic like so:

This topic will be used by the TTN api to send you a MQTT message every time their is an uplink event from your LoraWAN node.

The payload will eseentially look like this. This is nothing but a JSON

Here we will be more interested in the Payload-fields section or the payload raw section:

SO you need to parse the payload from the TTN node and send the values to the AWS IoT node. Here are the steps to perform

Once this msg.payload reached the AWS update request, the AWS IoT service will publish a success on the update/accepted or a failure to update/rejected topics. You can follow the tutorial here to know more in depth about these topics and how to interact with them.

Here is a sample of the RAK 811 code which you can run on your arduino UNO for sending messages to the TTN application server:

You can proceed to the AWS IoT Things console to and then Proceed to the Thing that you created for the LoRa node. Once inside the things registry console. Click on the Shadow option in the left Pane. This should show the new value that you have send via the rak811 node.

Congrats!!! you have successfully connected the LoraWAN node readings to your Amazon AWS IoT things attributes.