This projects shows how to integrate you LoRa up/down link messages to and from the RAK811 LoRa node into actionable workflow on Node-RED.

This projects shows how to integrate you LoRa up/down link messages to and from the RAK811 LoRa node into actionable workflow on Node-RED. 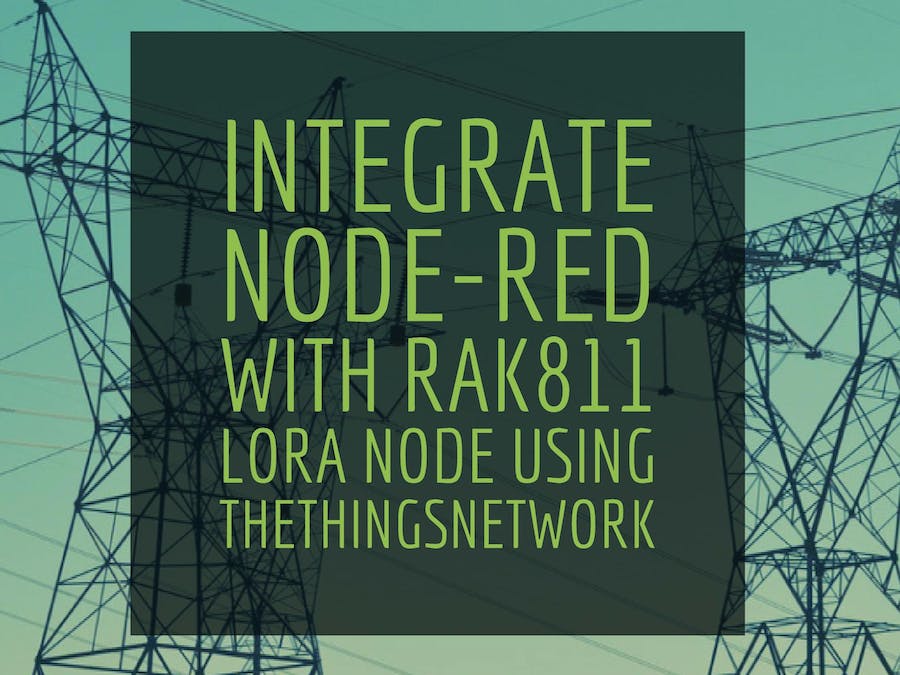 This tutorial aims to show how i was able to integrate my Node-red workflows to be triggered by uplink and downlink messages from the RAK811 lora node. The gateway i used here is the RAK831 LoRA 868 MHz gateway. The backhaul is Wifi and is being handled by our venerable Raspberry Pi 3.

By the end of this turtorial you will know the following:

According to the TTN web services site:

The Things Network is building a network for the Internet of Things by creating abundant data connectivity, so applications and businesses can flourish. The technology we use is called LoRaWAN and it allows for things to talk to the internet without 3G or WiFi. So no WiFi codes and no mobile subscriptions. It features low battery usage, long range and low bandwidth. Perfect for the internet of things.

It is a network that spans across the globe in a number of countries and provides the means to create Gateway, provision them into the network, allow LoRA nodes to talk to the applications via the gateways. There is a whole bunch of APIs that we will be seeing in this tutorial. The most important one being the MQTT APIs. We will come to that shortly.

RAK Wireless is becoming the pioneer in provising makers and developers with cutting edge tools, dev boards in order to enable them to work on the latest wireless technology stacks available in the market. Along with their awesome enginneering team and a stratergic location (Shenzen, China), They are proving to be a formidable name in the global IoT space

Two of their hadrware revolves around the LoRaWAN protocol. The RAK831 Gateway and the RAK811 node:

Together with the TTN gateway APIs and the TTN application and network server interfaces, RAK products can be used n a variety of applications and under various environmental requirements for fulfilling long range communication.

In order to keep this tutorial considerably short, Ill request you to proceed to the tutorial below to setup your RAK831 gateway:

Setup your RAK 811 and test communication with TTN:

To enable the RAK811 to talk to the RAK831 gateway follow the tutorial below:

Note: It is VERY IMPORTANT that you complete the two tutorials above before proceeding further and get your data coming up on the TTN device console. The tutorials cover a lot of the setup in depth and provide you with notes of where one can go wrong while configuring the nodes.

A look at the TTN MQTT APIS and its use in our project:

So you maybe wondering how do we get messages when up link and downlink messages are sent from a node, or when a node enters a particular state. Well its pretty straightforward.

1) You register a gateway in particular location by specifying the router to use with the gateways configuration. This also binds any App that gets information from the router to the region. Each region in turn has something called a MQTT broker that one can listen to for messages. Each time a action is triggered in the TTN backend (new message, device activation etc), a subsequent messageis sent to this Broker.

Now ncomes the node-red TTN nodes into the picture. These nodes are nothing but MQTT clients connecting to a particular topic being published from the TTN backend via a MQTT broker. You see that the nodes would require the following information

Each uplink field will be published to its own topic my-app-id/devices/my-dev-id/up/<field> The payload will be a string with the value in a JSON-style encoding.

Instead of payload_raw you can also use payload_fields with an object of fields. This requires the application to be configured with an Encoder Payload Function which encodes the fields into a Buffer.

By default, the downlink will replace the currently scheduled downlink, if any. It is also possible to schedule the downlink as the first or last item in a the downlink queue.

The payload of error events is a JSON object with the error’s description.

Now that you have a hang of what is goin on in the background, lets fire up our node installation.

Take out your raspberry pi 3, and follow the instructions below:

If you have the minimal version of Stretch, or other Debian based install, such as Ubuntu, that doesn’t have Node-RED already installed, you can install or upgrade using the Node-RED upgrade script command

The script will perform the following steps

We can try and install node-red manually by the following steps:Install nodejs:

Note: For user in China, i have got help from RAK engineers on how to solve the issue where npm node-red TTN palette doesn't install properly.When installing the ttn palette node, you may face an error where it says the process-nextick-args is not installed properly or any other dependency error. In such cases try installing the TTN node manually by the following shell commands:

To start Node-RED, you can either:

Note: closing the window (or ctrl-c) does not stop Node-RED running. It will continue running in the background.

Once installed we would require the Node-red TTN pallete installed:

Usually when you send message from a LoRA object you will only send some limited bytes. TTN payload decoder service can help you decode this information and store it in a meaningful way:

On how to use the payload functionality, Check out this excellent example provided by TTN:

1) Make sure both the RAK831 and RAK811 show up in the TTN console under gateways and devices respectively.

3) Make sure that the region you provide in theTTN node config is the same as the Handler region of the device (asia, or eu, or us etc)

4) Configure the rak811 node to connect to the same app key as you input in the node-red TTN node config.