In this tutorial, we will learn how to use I2C Pins in Raspberry Pi Pico & go through the I2C Scanner Code.

In this tutorial, we will learn how to use I2C Pins in Raspberry Pi Pico & go through the I2C Scanner Code. 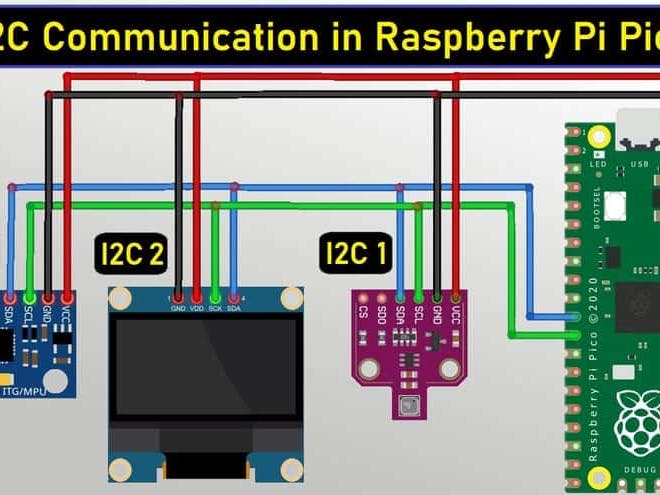 2. What is I2C Communication Protocol

4. How to use I2C Pins of Raspberry Pi Pico with I2C Sensors or Modules?

In this tutorial, we will learn how to use I2C Pins in Raspberry Pi Pico & go through the I2C Scanner Code. The Raspberry Pi Pico is built using an RP2040 microcontroller. The board exposes 26 multi-function GPIO pins from a total of 36 GPIO pins. The 10 GPIO Pins are not exposed, hence they can’t be used. Out of the 26 usable GPIO pins, there are 2 pairs of I2C Pins which will be discussed in this post.

We will see what is I2C Communication protocol and how does it work. We will also learn in detail about the I2C Pin of Raspberry Pi Pico. We will take I2C Scanner Code as an example and check how the I2C Address of a few I2C enabled sensors & modules. Before that, you can check our Raspberry Pi Pico Getting Started Tutorial to learn more about the module.

What is I2C Communication Protocol

Like UART communication, I2C only uses two wires to transmit data between devices.

The two wires are named Serial Clock Line (SCL) and Serial Data Line (SDA). The data to be transferred is sent through the SDA wire and is synchronized with the clock signal from SCL. All the devices/ICs on the I2C network are connected to the same SCL and SDA lines as shown above.

The devices connected to the I2C bus are either masters or slaves. At any instant of time, only a single master stays active on the I2C bus. It controls the SCL clock line and decides what operation is to be done on the SDA data line.

All the devices that respond to instructions from this master device are slaves. For differentiating between multiple slave devices connected to the same I2C bus, each slave device is physically assigned a permanent 7-bit address.

Each connection of the controller can be configured through multiple GPIO pins as shown in the figure. But before using an I2C controller, you should configure in software which GPIO pins you want to use with a specific I2C controller.

The Raspberry Pi Pico has RP2040 Chip which supports the following features:1. Device can work in Master or Slave Mode with a default salve address = 0x055

3. It can both transmit and Receive Buffers

4. It can also be used in interrupt and DMA mode

How to use I2C Pins of Raspberry Pi Pico with I2C Sensors or Modules?

The following code will scan the I2C Address of all the Sensors connected to the I2C pin of Raspberry Pi Pico. Copy the code and then Download & Run.

Once you run the code, the Micropython will try scanning the I2C devices connected to Pico Board. You can connect up to 127 I2C Slave devices. The device will scan the address and will show it in the Shell Window.

Kamaluddin Khan
Thanks to Mr. Alam.