Bring Majora's Mask to life by building a replica with glowing LED spikes.

Bring Majora's Mask to life by building a replica with glowing LED spikes. 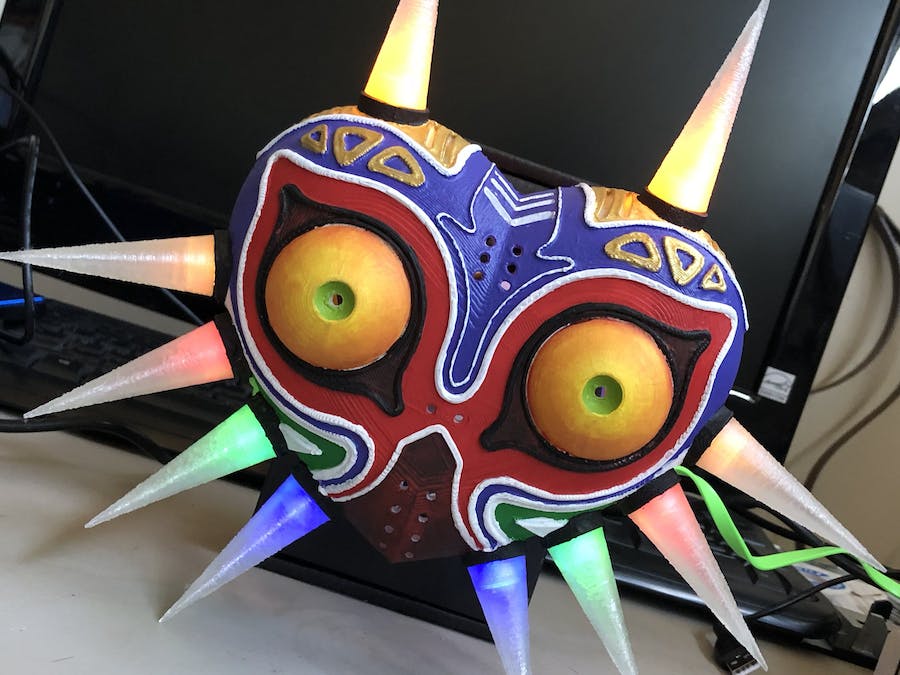 Simple story: I've always been a huge Legend of Zelda fan, saw this on Thingiverse, and had to make one. It's a 3D printed replica of Majora's Mask with 10 LEDs and an ESP8266 board. I have to give credit to lucidhack for both the 3D print AND the original idea. This is simply my implementation of it.

I'm horrible at painting so I got my lovely wife to help. Lucidhack has some techniques on how to get different finishes. We did straight-on acrylic paint - no other primers, coats, etc. and I think it turned out well.

I tested, soldered, and wired everything before putting the LEDs in the spikes and applying superglue. The pin-out for this can be found below along with the code. The wiring is straight forward with the exception of the multiple GND connections. What's going on in the back (see bottom gallery for picture):

The code is shown below in the.ino file. Connect the micro USB cable to the ESP8266 board and a computer. Bring up Arduino IDE (if you don't have it installed, you can get it here). In order to flash the ESP8266, you'll need install the right libraries in the Arduino IDE. This takes less than a minute to do with this guide.

1 / 2 • Testing the mask before we superglue the lights

The rest of this is pretty straight forward