A powerful blind controller that uses the MQTT to connect to Apple Homekit via Homebridge.

A powerful blind controller that uses the MQTT to connect to Apple Homekit via Homebridge. 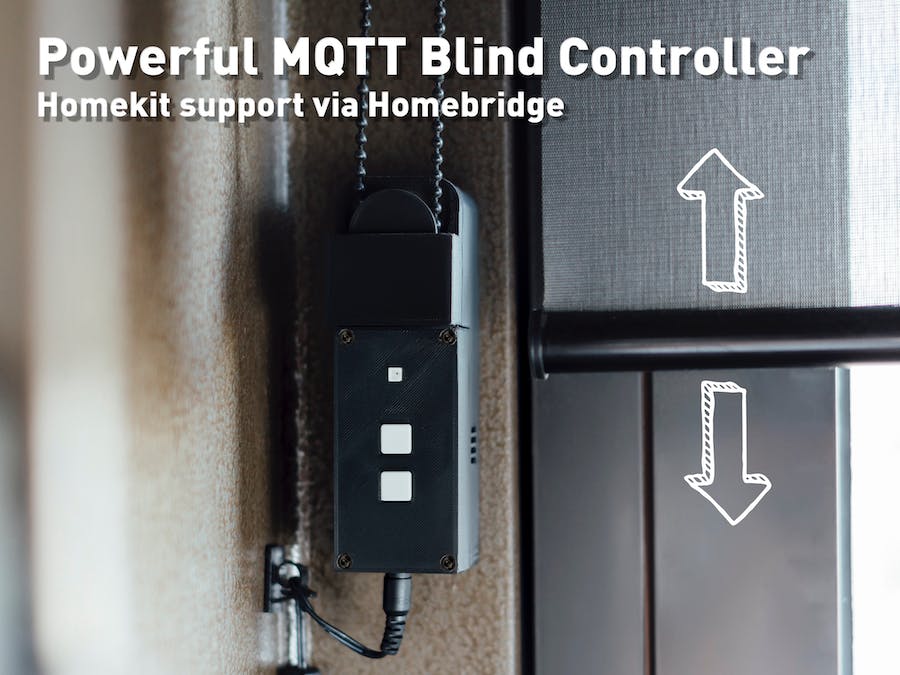 Let there be available light!

It was one of my more challenging projects to automate my home but also the most rewarding as I have 8 (!) blinds/shades at my home wanted to be motorised to make the most of the natural light. 4 of them are quite large and heavy at 1.5 meters width and 3 meters length!

Looking at commercially available options I could have spend thousands to get shades with inbuilt motors (which are superior I have to admit) or around $200 for a similar retrofit unit made by various commercial manufacturers. But looking into the these options most of them didn't have any Apple Homekit compatibility or sometimes even buttons to manually control them - and I was looking for something more affordable!

I came across a promising design from cabuu which was well documented, had buttons, used off the shelf parts and most importantly used a motor with an encoder that was quite affordable. I ordered a couple of pcb's of him to test it out.

After 3D printing the housing and soldering all the parts together to my surprise the 12v motor was underpowered by using a motor driver rated at max 10V.

I found a few details of the housing needed refining as well - e.g. adding grooves for the chain to the Gear Surround or mounting holes to the main body as well as changing the sizing of some parts.

As my blinds are quite large and heavy I wanted to run the motor at 12V and decided to use the Adafruit DRV8871 motor driver due to it's similar size and functionality. As I didn't want to completely redesign the housing I created a circuit board based on the original design but with the more powerful motor driver.

Soldering and assembly of electric components

I am not going too much in detail how to solder but here is quick summary of my approach and order:

Please note ACC for Accessory is unused. It was meant to attach a light sensor to the Analog pin in future versions. It's easy to add but didn't see the benefit yet.

It should make more sense once you have all the parts printed and electronics assembled in front of you. Here are the steps:

Upload the code and first set up!

Before uploading the code make sure to enter the MQTT credentials (MQTT server, user, password) in Arduino IDE. I had to use the ESP8266 library version 2.42 as the latest version gave me issues. All the other libraries needed are the following and the most recent should work:

The host is called 'myblind' by default but can be changed.

You can also change the direction of the Motor (MOTORWIRE) and wiring of the Encoder (ENCODERWIRE) - use 1 or 0 to do so but leave it for now.

Once the code is uploaded successfully you shall be able to see and connect to 'myBlind' wifi network via WiFiManager. Connect and enter your wifi details and if done correctly it will connect to your local wifi network and will be ready to run!

You will be able to upload future updates via web server which its useful if you use more than one.

Attention: After saving the WiFi credentials successfully,keep the DOWN Button pressed to Reset the EEPROM to Default settings.

Otherwise it will crash as the controller tries to read saved EEPROM values initially which are not there yet! If it didn't work the first time unplug it and power it up again while keeping the DOWN Button pressed.

For now keep the computer connected and attach the 12V Power adapter to power up the motor!

Use the Serial Monitor at 115200 baud. A long press of the UP Button should rotate the Motor clockwise and the Encoder value of the current position (Pos) should go up too. If that's not the case change the ENCODERWIRE value to the opposite number (either 1 or 0). The reason behind this is some of the motor encoders are wired one way and some the other.

It's the same obviously using the DOWN Button but the other way around.

Attachment to the existing blind

You best of assembling the unit initially and testing it without being properly attached it to the window or frame yet. Make sure the flat bit of the Motorshaft is facing up and attach the chain to the motor via the Gear (with the Gear coupler). Tighten the gear coupler to the motorshaft with the hex and headless bolt that comes with it. Not too tight!

Due to the chain grooves the blind chain is able twist 90 degrees to either side so we can mount the controller parallel to the blind - so directly on the wall or frame. How you want it to turn is up to you but my settings are MOTORWIRE on 0 turns it clockwise for a righthand side installation and MOTORWIRE 1 counterclockwise for a lefthand side installation. But you can play with that. Just make sure the Position value goes up when pressing UP and down when pressed DOWN!

Make sure the chain is tightened evenly and mark the 3 spots on the wall for the holes. I highly recommend marking spots at the low side of the mounting holes as you will most likely end up needing them to tighten the chains later on by pulling the unit further down. Metal chains are more susceptible to stretching over time.

Once you are happy with the height all that's left to do is to secure the main body with screws and preferably washers to the wall/frame! Put on the Gear surrounds, Gear and chain, Button Surrounds and connect it when the 12V Power supply!

How to use it!

Set up Position of Blind (100%)
A continued long press UP will move the blind up - keep pressing UP until it reaches the up position followed quick short press UP. LED flashes 3 x Blue, 1 x Purple to confirm new up position

Set downPosition of Blind (0%)
A continued long press DOWN will move the blind down - keep pressing DOWN until it reaches the down position followed quick short press DOWN. LED flashes 3 x Yellow, 1 x Purple to confirm new up position

Ignore EEPROM values Press UP BUTTON for 5 seconds while powering up.
It's followed by the LED flashing 3 x Pink

Reset EEPROM values Press DOWN BUTTON for 5 seconds while powering up.
It's followed by the LED flashing 3 x Red

Reset All Settings incl. WiFi credentials Press UP + DOWN BUTTON for 5seconds while powering up.
It's followed by the LED flashing 3 x Green, 4 x Yellow, 5 x Orange, 6 x Red

Implementation for config.json in Homebridge as an accessory via the amazing plugin mqttthing by arachnetch. I personally use a Raspberry P Zero W for Homebridge and local MQTT server powered by Mosquito. Setting up Homebridge and MQTT is a different topic and you will find plenty of information on their websites!

Was it worth it?

After a initial learning curve and starting with one blind it's now been running on all 8 blinds for about 10 months. It works reliably without hiccups. Looking at the costs I would say it's around $40 per unit which is a fraction of what I would have paid for a commercial product.

But I had 2 motors giving up in the first month but not since after. I assume due to its inexpensive price you might get a lemon here and there. I would recommend getting a spare one if you lift heavy loads. Also, the noise levels vary from motor to motor but 80% of them are really quiet and the rest a bit louder. Most are noisy only when lowering the blinds.

I had to tighten the chain tension more times at the beginning as the chain stretched over time. I recommend using chains with plastic balls and cord instead of the metal chains - they seem to stretch far less over time!

Occasionally I had to reset the start and end points of the blinds when there was a system reset while it was moving. I am blaming my moderate coding skills - I am very sure the code can be improved a lot but this is still a hobby for me.

But it's amazing to see how it works with Homekit and Siri. I can just say:"Hey Siri, open all blinds" and all my blinds are opening automatically.Or saying "Hey Siri, set blinds in the living room to 50%" Or just let them close once you leave the house via automation! Worth it!!! 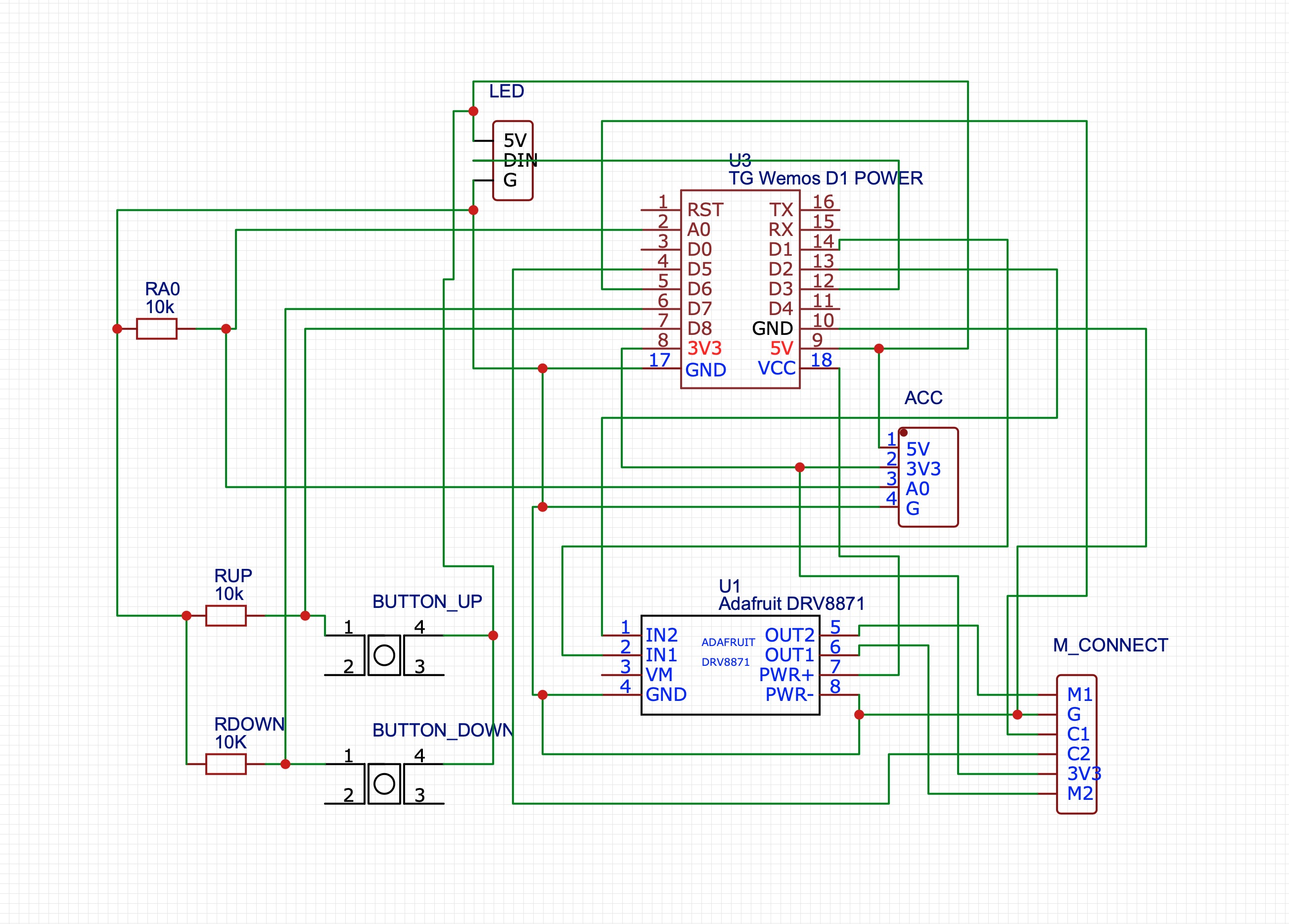 2 projects • 9 followers
ContactContact
Thanks to Cabuu.