This is my 3rd tutorial with a focus on Scratch and Physical Computing using RPi. Here we will explore the new version of Scratch, the 2.0.

This is my 3rd tutorial with a focus on Scratch and Physical Computing using RPi. Here we will explore the new version of Scratch, the 2.0. 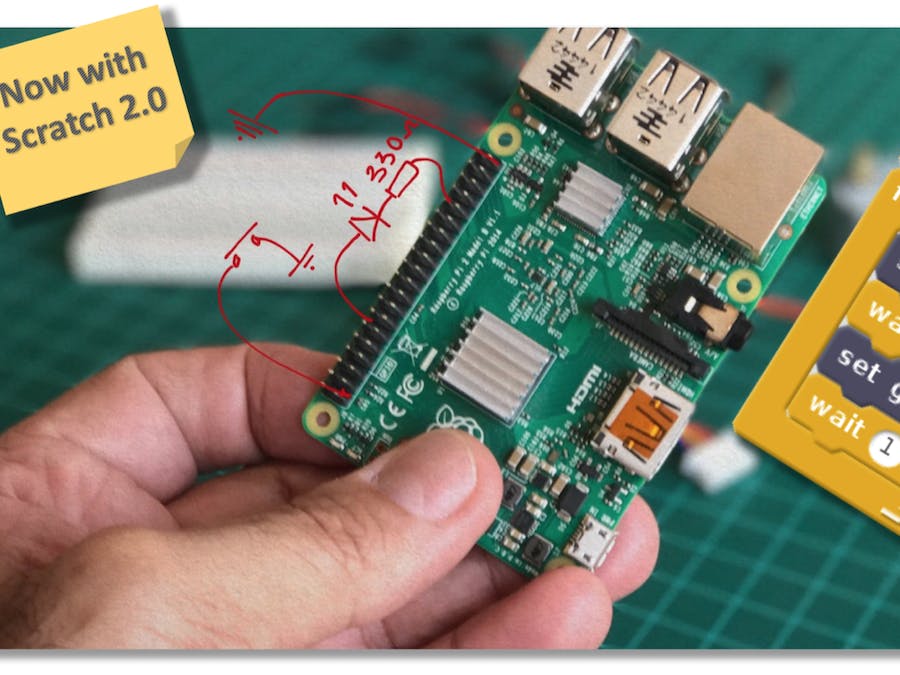 This is my 3rd tutorial with a focus on Scratch and Physical Computing. Regarding this topic, I have already published:

Here, we will learn the new version of Scratch, the 2.0, exploring some new and exciting projects.

For the experiences in this tutorial, you will need at least the items:

As we know, Scratch is a great tool to teach beginners how to code, but before starting our tutorial, I really recommend that you go familiarize yourself with the Scratch 2.0 language, following some basic tutorials. Doing that will help you to better understand how to use a Raspberry Pi for Physical Computing.

There are 2 ways to do that:

A new offline Scratch 2 version started to be delivered bundled with the last Raspbian OS release, and it is really great, with several new features that will help you to create a more professional codification.

WARNING: At least with me, the actual version introduced some "freezing issues", that could be related with Flash. Those freezings appeard whe I tried to upload new background or sprits.

When you have the Pixel desktop in front of you, go to left up corner Application Menu (the "Raspberry Pi logo") and open it. You will find as one of the options: "Programming".

above has 3 possible parameters:

Scratch 2.0 also allows the creation of custom blocks, allowing code to be encapsulated and used (possibly multiple times) in a project. We will see how to do it in the examples.

We will not cover how to prepare the Raspberry Pi to be used in this tutorial, but If you need any help, please refer to this link: Installing Raspbian with NOOBS.

Our Raspberry Pi will be running with the latest Raspbian version of the Operational System, having PIXEL, as our desktop environment.

Once we will interact with the physical world it is good to remember that our gateway to that will be the Raspberry Pi GPIO connector. The above photo shows the connector, where I have drawn some fictional components in red.

Pin Numbering Important to mention that we will use Broadcom (BCM) pin numbering for the GPIO pins, as opposed to physical (BOARD) numbering. Any pin marked “GPIO” in the above diagram can be used as a pin number. For example, if a LED was attached to “GPIO13” (physical pin 33) you would specify the pin number as 13 and not "33".

It's time for the "Hello World" of Physical Computing, the "blink of a LED"!

Let's start connecting a LED to GPIO 13 of our Raspberry Pi (RPi, for short).

The above screenshot above will show you the final program and bellow a video with our LED blinking:

Now, that we know how to control one LED, let's install 2 new ones, with different colors:

Repeat what you did at last step, connecting the LEDs as shown above:

Suppose that we want now the 3 LEDs blinking independently at different frequencies. The first thing that you can do is to copy the set of block developed on the last step, changing the GPIO number and the delays for each one of the blocks, let's say:

It would work, but let's use the opportunity here and introduce a new feature of Scratch 2, the "Custom Blocks".

First, let's create a custom block naming it "setup", that will be used to turn OFF all LEDs

You will see that a new block will appear "define [setup]", below it, we can add 3 blocks setting the GPIOs to LOW as shown at above print screen. Now, this custom block "setup" (that it is, in fact, a "function"), can be called anytime in the program. Let's call it at starting, under the green flag, so anytime time that the program run, we will guarantee that the LEDs will be OFF.

Now, we will create a more elaborate custom block. We will create a type that can receive parameters allowing further generalization and reuse of code blocks. The idea is to create a generic "Blink block", where the parameters will be the GPIO number and the time. So, our final block will be like:

So, let's do the following:

Now, a new block will appear:

Now if we want to blink the LEDs independently it is enough to use blocks like those:

The code for this example is here: blink_V2.sb2

Step 6: Introducing a Push-Button and Variables

Using a push-button with the Raspberry Pi and Scratch 2 is a "straight forward task". with the Scratch 1.4, we saw that an internal pull-up resistor was used. Here, instead, we will use "direct logic", or:

So, let's connect the button as shown in above diagram.

WARNING: you must use the 3.3V output (physical pin number #1). The RPi does not support 5V on its GPIOs

For reading our push-button, we will create a new variable "button" to be associated with its state:

The blocks to that will be:

We will include those blocks on a new block that we will call: "gpioStatus" and by the way, we will do the same for LEDs, creating variables associated to each one of them:

And will associate values to those variables, and we will act on correspondent GPIO accordingly:

And of course, the opposite for LEDs off.

All above logic should also be included at "gpioStatus" function, that will be running during all the time. So, we will not need to be worried about GPIOs anymore. Instead, we will use the variables to build our program logic.

For example, let's create a program that:

And so on. If a button is pressed, the frequency is changed, let's say around 3 times faster.

The first thing to do is to create a new variable, named "time" that will have a value, let's say:

As you can see, we are in fact controlling time's value actuating on a physical push-button, but here only "variables" are used.

We can do the same for the LEDs sequence. We will set red, yellow and green variables, ON or OFF, keeping them ON using the variable "time" now. The above print screen shows you how the program looks like.

The below video can give you a real idea about what's going on:

Here the code used in the example: 3LED_button_V2.db2

One of the great features of Scratch is the animation. So, let's introduce some very simple animation on our projects.

Let's change the last project a little. Now, The traffic lights will perform its sequence only when the push button is pressed. If not pressed, all lights must be off. The code is very simple. Try to do it before you see my solution.

OK, but let's make the things more interesting. Let's create a new sprite a "Blue Button" (I left with its default name, sprite 1. You can change it) that will have 2 possible costumes:

Now we must create the Traffic Light that will show the LED status on the Stage. We can do it or creating a new Sprite, or creating new backdrops. We will do the second on, so you can see 2 different examples of animation creation here.

With the paint editor, I created 3 empty circles, that I called "OFF". Coping this backdrop 3 times, I filled one of the circles with one of the LEDs color (Red, Yellow, and Green) in this sequence. I name them (SURPRISE!): RED, YELLOW, and GREEN.

So, at Backdrop"s Script tab I included a piece of code that will run forever, changing the backdrop according to LED variables (see above). Very simple and straight forward.

And that's it! As you can see, the final project is a group of various simple parts, what's make it at end also very simple to understand.

NOTE: The secret here is to be ORGANIZED with the code.

Below a video with our project and animation running:

The code can be downloaded from here: Traffic Lights V2.sb2

On the last step, we had a lot of fun creating simple animation and mixing physical and virtual things together. Let's now, do a more elaborate project.

Before we enter in the animation part of it, let's complete the HW. This project will have a pedestrian Traffic Light and so, we will include a Buzzer that will produce a sound ("Beep"), during the time allowed for pedestrians crossing a street. The buzzer will be installed at GPIO 16. AS we did before, to simplify things, let's create a new variable "beep" that will activate GPIO 16 High or Low. The logic will be included at gpioStatus, same we did for the LEDs.

Let's take our little friend, the MJRoBot and show him London, the birthplace of Raspberry Pi!

For starting, we must define the general specification regarding our project:

We will have 4 backdrops. 3 for London surrounds and the most important one: Abbey Road.

Try to code it by yourself and only after, compare your solution with mine! There are several different ways to do that.

A quick video about the final project working:

As always, I hope this project can help others find their way in the exciting world of electronics, robotics and IoT!

Saludos from the south of the world! See you at my next project!